Buy Photo
Bing Crosby poses with his new Mercedes in the Stars and Stripes parking lot in August, 1953. Crosby picked up the car in Stuttgart and visited Stripes on the way to Frankfurt, where he played some golf. (Stars and Stripes)

Buy Photo
Bing Crosby poses with his new Mercedes in the Stars and Stripes parking lot in August, 1953. Crosby picked up the car in Stuttgart and visited Stripes on the way to Frankfurt, where he played some golf. (Stars and Stripes) 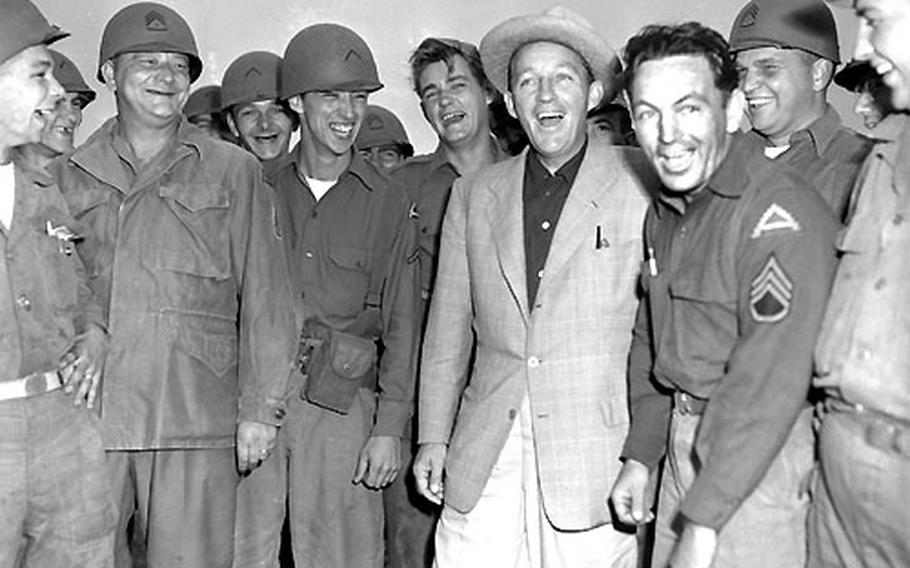 Coming from Stuttgart after picking up his new $8,250 Mercedes-Benz convertible, Bing Crosby stopped off at Frankfurt course for a quick round.

Cloudy skies and scattered rainshowers held Bing to12 holes, but he gave the gallery of 500 spectators a thrill.

Possessor of a three handicap on his home course in California, Bing lived up to his reputation on the Frankfurt links.

He had never seen the course before, he was besieged by autograph seekers and camera bugs both between and during shots, and at times couldn't see where he was driving because of crowds between him and the green, but Crosby still managed to come in with a two-over-par 38 for nine holes.

The rain drove Bing and his partners back to the clubhouse where the radio and film star sang several songs.

After staying overnight in Frankfurt, Bing will head for Brussels, and from there back to Paris.

He's slated to play in the French Amateur golf tourney June 4 at Chantilly, outside Paris, and has already received a bye into the second round. He will meet Pierre Bochayer, of France, in his first match.

Bing, who learned his game from MacDonald Smith, a famous old-time pro, said he thought Jimmy Demaret was potentially the best golfer around today.

He said that if Demaret paid a little more attention to his golf and took the game more seriously, he would be higher on the moneywinning list.

Bing stopped off for lunch at The Stars and Stripes Press Club in Darmstadt.