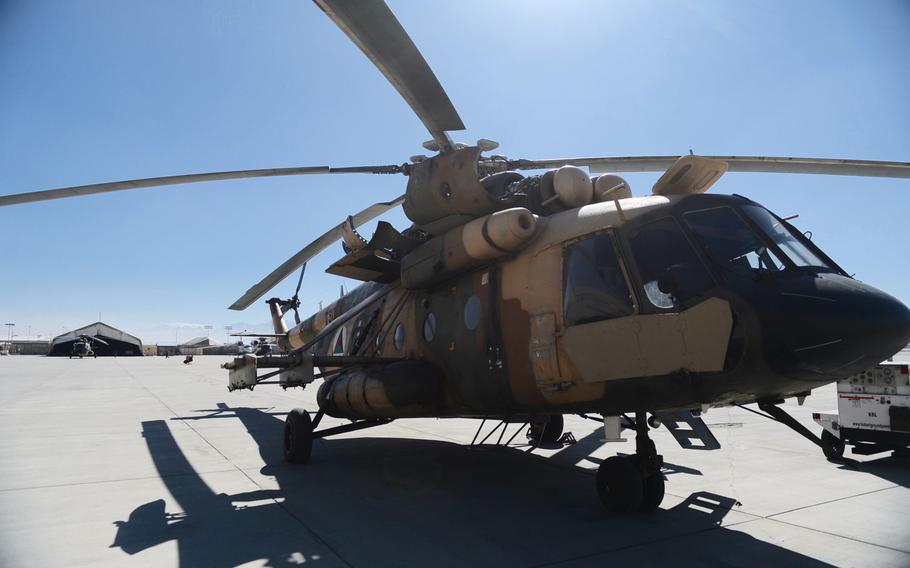 Buy Photo
One of the Afghan air force's 46 Mi-17s sits at Kabul's military airport on Feb. 21, 2017. The Russian-made Mi-17s make up the backbone of the AAF, but could be replaced by U.S.-made Black Hawk helicopters in the near future. (Phillip Walter Wellman/Stars and Stripes)

Buy Photo
One of the Afghan air force's 46 Mi-17s sits at Kabul's military airport on Feb. 21, 2017. The Russian-made Mi-17s make up the backbone of the AAF, but could be replaced by U.S.-made Black Hawk helicopters in the near future. (Phillip Walter Wellman/Stars and Stripes) 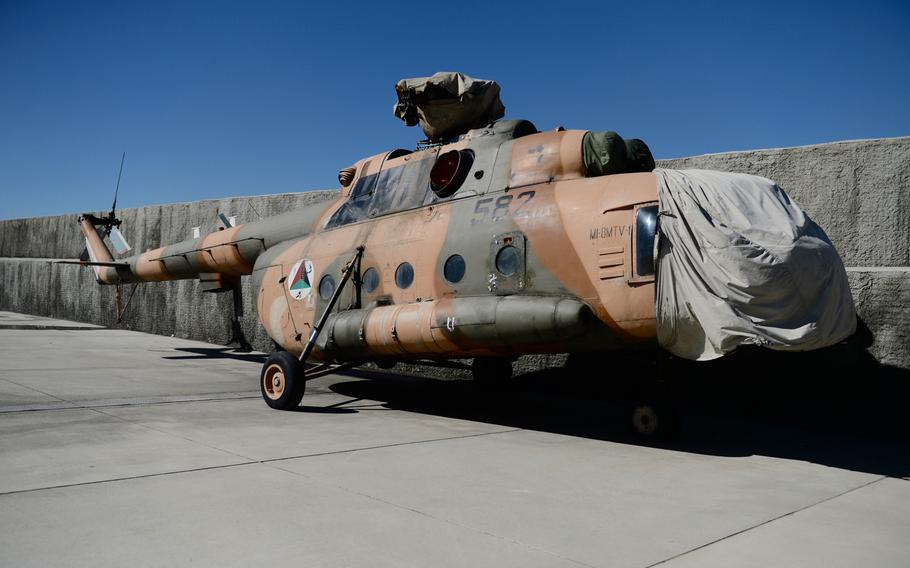 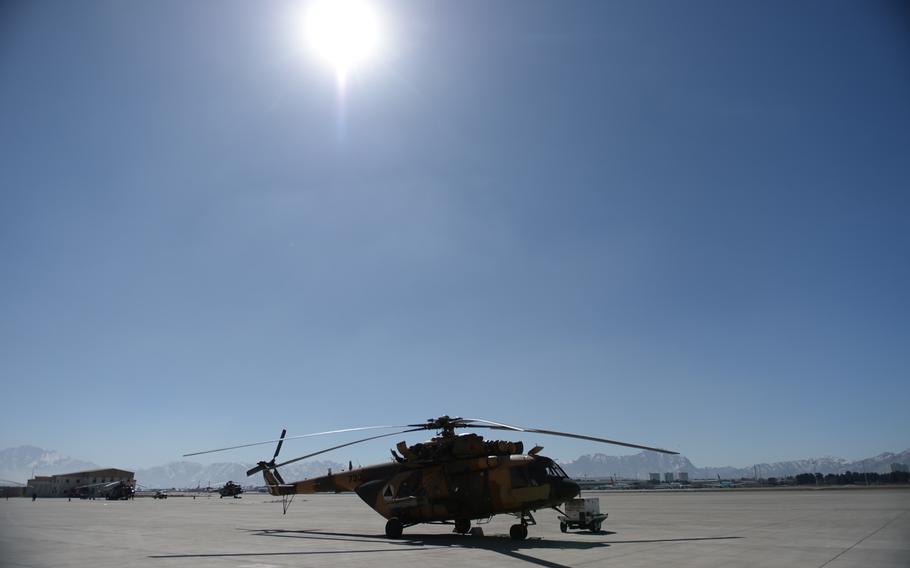 Buy Photo
A Mi-17 helicopter at Kabul military airport on Feb. 21, 2017. The U.S. Defense Department would like to replace Afghanistan's fleet of Russian-made Mi-17s with U.S.-manufactured Black Hawks. (Phillip Walter Wellman/Stars and Stripes)

Smith is one of a few Americans trained to fly and work on the Mil Mi-17s. He does so for basically one reason — to pass the knowledge on to Afghans. His work is part of broader NATO efforts to help build a sustainable Afghan air force, which is seen as vital for Kabul to counter the Taliban insurgency.

“With the Mi-17s they’re fairly well along that they can almost be on their own,” Smith said. “We just kind of watch and make slight suggestions.”

But Smith’s work, and the Afghans’ knowledge of the aircraft that form the backbone of their air force, could soon be obsolete. The U.S. Congress is deliberating whether to approve funding that would replace the old workhorses with American-made UH-60 Black Hawks.

Critics say that the proposal is motivated by politics and that such a large change could have negative consequences for Afghan forces.

The United States initially bought Mi-17s for the Afghans to accelerate development of their fledging air force, which had used earlier versions of the helicopter since the 1970s. But in 2013, under pressure from Congress, the Pentagon blocked a purchase of more than $1 billion worth of new Mi-17s. The following year, after Moscow’s military involvement in Syria and Ukraine, President Barack Obama issued restrictions on doing business with Russian arms manufacturers.

The Pentagon predicts Afghanistan’s battle-worn Mi-17 fleet will become unsustainable by the middle of next year, largely because of lack of parts and aging airframes. It therefore requested $264 million from Congress in November to modify 53 older-model Black Hawks to enable them to perform the tasks of the Mi-17s.

The chopper fleet is used to transport troops and supplies, perform medical evacuation and provide close air support. All of these tasks are necessary for the Afghans to sustain their operations against the emboldened Taliban, who control more territory than at any time since 2001, when a U.S.-led invasion ousted them from power.

“Going forward, transitioning from Russian to U.S. airframes will ensure Afghan forces have a more sustained fleet that is interoperable with U.S. forces and will enhance the Afghans’ ability to operate independently of coalition forces,” Gen. Joseph Votel, commander of U.S. Central Command, told the Senate Armed Services Committee earlier this month.

While the switch to Black Hawks helps the U.S. get around its Russian restrictions, some experts believe it would be better for Afghans to keep their fleet of Mi-17s and that other countries with fewer or no restrictions could help them do this. India and Australia have both reportedly offered to help.

Many more Mi-17s are used worldwide than Black Hawks, and finding spare parts is not difficult, according to Matthew DuPee, a senior South Asia analyst for the Pentagon. In the future, it might even be easier for the Afghans to find parts for the Russian aircraft than for the Black Hawks, he said.

He said the Mi-17 is also better suited for Afghanistan’s climate and mountainous terrain than the Black Hawk. The Black Hawks can fly faster, but the Russian helicopters have better “hot-and-high” performance, meaning they can carry more cargo, more troops and operate at higher altitudes — a key consideration in a mountainous country like Afghanistan.

“Doing the switch essentially from the Mi-17s to the Black Hawks, given the current environment, really looks more like a political profiteering exercise on the part of some U.S. politicians than having the Afghans’ interest at heart,” he said.

A number of American senators, particularly from Connecticut, where the Sikorsky plant that makes the Black Hawks is located, have pushed hard for the replacement.

When asked if the Black Hawks would be better than the Mi-17s for Afghan forces, Sen. Richard Blumenthal (D-Conn.), one of the most vocal supporters of the deal, told Stars and Stripes: “American dollars should not be used to purchase Russian-made helicopters when American helicopters, including Sikorsky’s Black Hawk, are vastly superior.”

Nicholson said it would take nearly two years for the Black Hawks to arrive in Afghanistan once the funding is authorized. This means even if the request were approved today, the American choppers would arrive after the Mi-17 fleet becomes unsustainable.

Independent researcher Matthew Archibald said the time gap is another reason why maintaining or buying new Mi-17s for the Afghans should be considered essential to allow time for a reasonable transition to the Black Hawks.

Immediately stopping use of the Mi-17s would “leave the Afghans without any close air support in the interim period,” he said. “It’s definitely going to result in increased casualties if not allowing the Taliban to make more gains.”

Nicholson has assured the Afghans that the U.S. would “bridge the gap” in their capabilities as they move to the Black Hawks. But it raises questions about further American commitment in Afghanistan and whether the Black Hawk deal would likely extend that.

NATO’s Train, Advise, Assist Command-Air currently has a five-year plan to make the Afghan air force sustainable and to end its own mission.

“If we got new aircraft, we would have to update that five-year plan; it might take six, seven, eight years,” said Col. Nicola Gismondi, TAAC-Air’s deputy commander. “We would have to build a little bit more depth.”

Training Afghan Mi-17 pilots to switch to the Black Hawks could be accomplished fairly quickly, in up to 12 weeks, according to Pentagon estimates.

Nevertheless, critics worry the Black Hawk deal could be yet another hurdle impeding the progress of Afghanistan’s air force. They believe officials should think twice about whether this is the right time to go ahead with it.