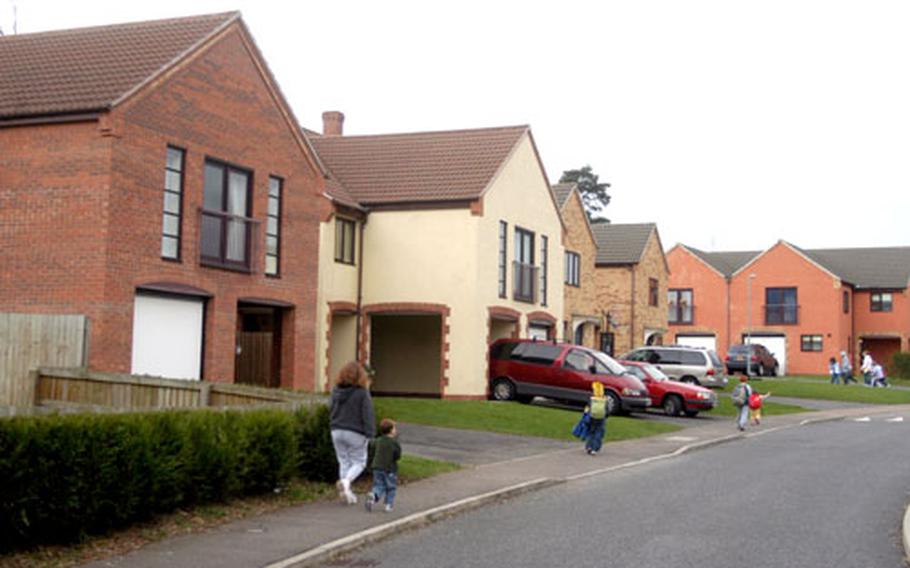 Children head to their homes inside the U.S. housing area in Thetford after a recent school day. Some residents blame the neighborhood’s close proximity to Abbey Estates, a large public housing project, for an uptick in crime, largely burglaries of garages, sheds and cars. (Sean Kimmons / S&S)

Children head to their homes inside the U.S. housing area in Thetford after a recent school day. Some residents blame the neighborhood’s close proximity to Abbey Estates, a large public housing project, for an uptick in crime, largely burglaries of garages, sheds and cars. (Sean Kimmons / S&S) 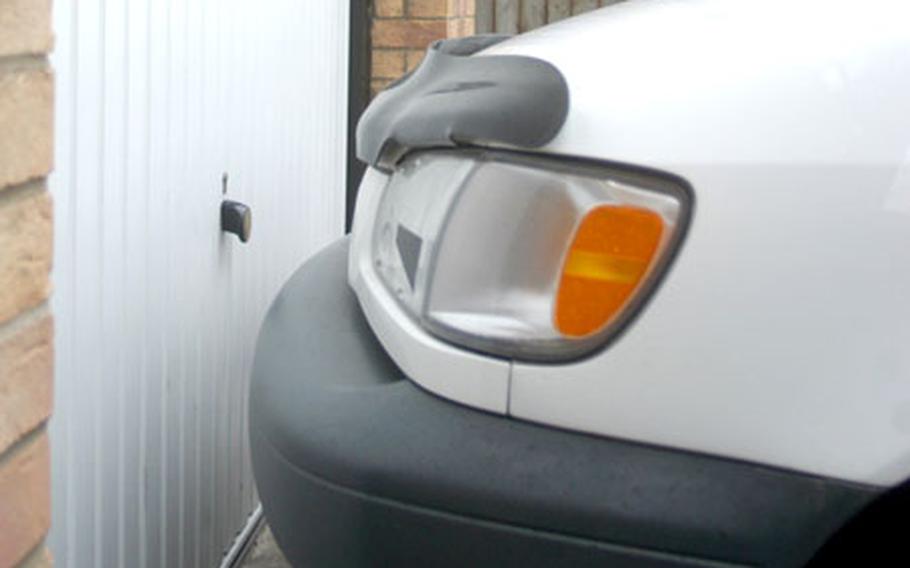 Residents have been told to park vehicles inches from their garage doors to prevent them from being opened by thieves. (Sean Kimmons / S&S) 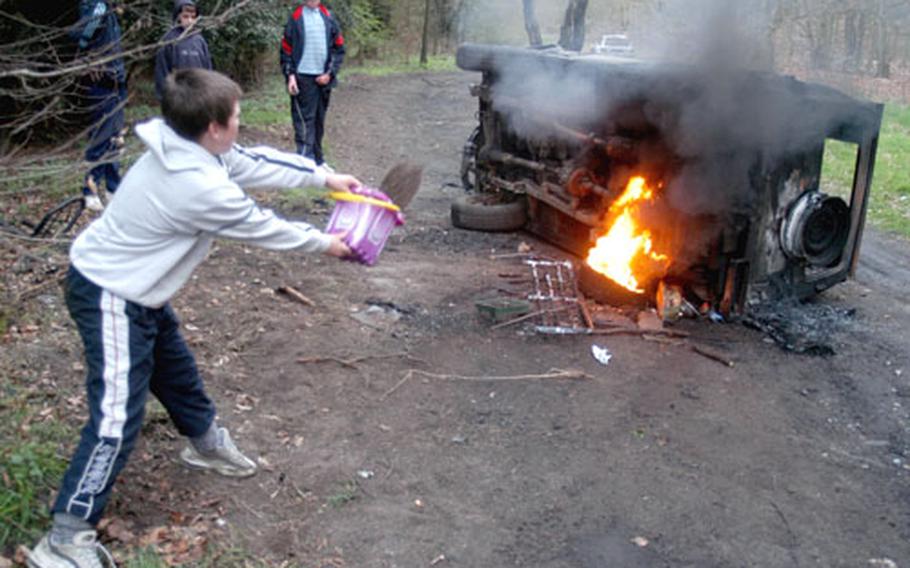 Teenagers from the Abbey Estate, a public housing project near military housing in Thetford, try to extinguish a fire on an abandoned vehicle believed to have been stolen in the area. (Sean Kimmons / S&S)

THETFORD &#8212; Last month, Capt. Shawn Timpson, his wife and four children were asleep at home in the U.S. housing area in Thetford when Timpson awoke to feel a cool draft from downstairs.

Timpson investigated and saw that his garage door, which has access to the home, was open. His wallet and his wife&#8217;s purse were missing. The 351st Air Refueling Squadron officer contacted British police and filed a report with Air Force security forces.

Later, he discovered that thieves also took off with his digital camera and laptop. He estimated that he lost about $1,500 worth of items.

The Timpsons are not alone. Several residents say that 75 percent of the 120 houses in the neighborhood about 15 miles from RAF Lakenheath have been hit by thieves &#8212; so often that they have nicknamed the neighborhood &#8220;Theftford.&#8221;

They suspect their location near a British public housing project named Abbey Estates, which is about a half-mile away, might be a reason for the frequency of thefts.

Most of the crime in the neighborhood is limited to car, shed and garage burglaries. But the break-in while the Timpsons were at home left some residents distraught.

Melissa Caparella, her husband, Capt. Tony Caparella, and their children are the Timpsons&#8217; neighbors.

The Caparellas have had a bicycle stolen and their shed burglarized. Melissa Caparella also said a neighbor&#8217;s full-size trampoline was taken from a back yard and military clothing was pinched from another neighbor&#8217;s garage.

She can&#8217;t stop feeling like a target, she said, because all she hears about is thieves roaming the neighborhood.

A spouse of a 492nd Aircraft Maintenance Unit airman, who didn&#8217;t want to be identified, said her car and garage have been broken into twice. She is fed up with the security troubles in the neighborhood, she said.

No patterns of theft have been reported in the U.S. housing area over the past few weeks, but there was a pattern two to three months ago, according to Tim Peacock, inspector-in-charge of the Thetford Police.

&#8220;It was quite clear that people were targeting this estate because of the lack of security,&#8221; he said.

House burglaries in that period averaged 3.6 offenses per 1,000 homes. Peacock said police do not track specifically if the victims are in the U.S. military.

Officials at Lakenheath&#8217;s 48th Security Forces Squadron said the number of crimes reported to the squadron had declined in recent months. Air Force personnel in Thetford reported 14 thefts in December, three in January and none in February. Numbers for March were unavailable.

However, not all reports made to the British police are reported to the Air Force police, security forces officials said.

Some residents said they don&#8217;t bother reporting the incidents at all.

Because some residents feel helpless, some husbands have talked about launching a stakeout operation to catch the thieves, he said.

Thetford Police Constable Dave Farrow urged residents to report all crimes to the British police and Air Force security forces. Otherwise, the neighborhood will not get the same attention as other troubled areas, he said.

In response to the thefts, the RAF Lakenheath housing office distributed a newsletter to all residents about how they can protect themselves. It stated that residents should park their vehicles inches from the outside of their garage doors, so they can&#8217;t be swung open.

British police have told residents to keep all doors secured, but residents say the garage door locks are worthless.

Residents have resorted to jamming screwdrivers and bolts into the tracks of their garage doors to keep them from being opened.

The 2&#189;-foot-high fences surrounding many of the homes are the biggest concern to Master Sgt. Tracy Brookens, one of the town mayors in the housing area.

The Air Force is aware of the problems in Thetford, Kiron Mullen, the facilities chief for RAF Lakenheath&#8217;s housing office, said.

Mullen said he did not know when the funding would be approved at the U.S. Air Forces in Europe level.

In the meantime, he urged residents to protect themselves and report all crimes to local police and security forces. Additional issues can be brought up at the next town mayor&#8217;s meeting, which will be held at the housing office June 1.

For your information ...If residents have questions about security, they can contact the Thetford Police at 01842 222605.