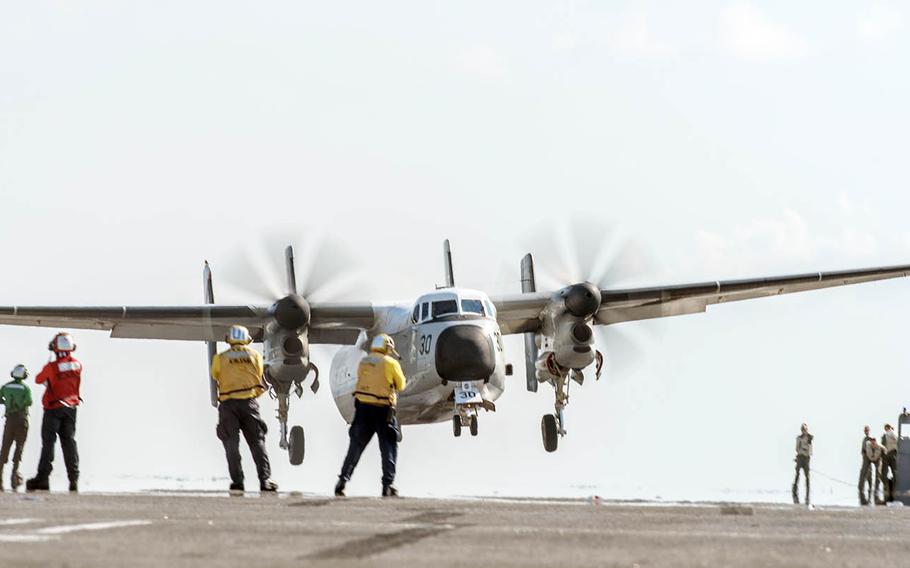 A C-2A Greyhound performs a touch-and-go on the flight deck of the USS Ronald Reagan in waters south of Japan, May 19, 2017. (Nathan Burke/U.S. Navy)

YOKOSUKA NAVAL BASE, Japan — Search-and-rescue efforts continued Thursday for three sailors missing after a Navy aircraft went down the previous afternoon in the Philippine Sea.

“Our entire focus is on finding all of our sailors,” Rear Adm. Marc Dalton, Task Force 70 commander, said in a statement released Thursday. “U.S. and Japanese ships and aircraft are searching the area of the crash, and we will be relentless in our efforts.”

The search — which has covered more than 320 nautical miles — is spearheaded by the Ronald Reagan with assistance from the guided-missile destroyers USS Stethem, USS Chafee, USS Mustin and Navy aircraft, the statement said. The JMSDF helicopter carriers JS Kaga and JS Ise as well as three destroyers are also involved.

The Navy has contacted the families of the missing sailors but will withhold their names for 72 hours, citing Navy policy.

Shortly after the crash, eight people were rescued by Navy Helicopter Sea Combat Squadron 12 and are in good condition aboard the Ronald Reagan, the Navy said.

The Greyhound was carrying passengers and cargo from Marine Corps Air Station Iwakuni to the carrier at the time of the accident. It is assigned to Carrier Air Wing 5, the aviation component of the Ronald Reagan strike group.

The crash’s cause is unknown. The carrier was conducting an annual bilateral maritime field-training exercise with the JMSDF at the time.

The exercise, which was scheduled to run through the weekend, involves 14,000 U.S. personnel, the Navy said. It “is designed to increase the defensive readiness and interoperability of Japanese and American forces through training in air and sea operations.”