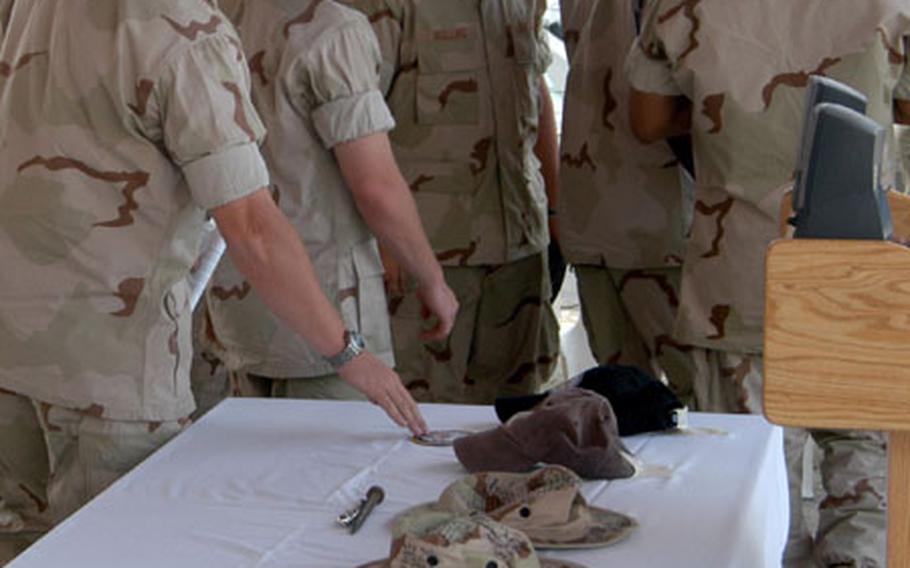 Members of USS Firebolt&#39;s crew solemnly touch the uniform covers of their fallen comrades at a memorial service for Petty Officer Michael J. Pernaselli, Petty Officer Christopher E. Watts, and U.S. Coast Guardsman Nathan Bruckenthal. They were killed when a fishing boat they were preparing to board exploded near the Khawr Al Amaya Oil Terminal in the North Arabian Gulf. (Courtesy of U.S. Navy)

The two sailors and member of the Coast Guard were killed when a dhow they were preparing to board April 24 exploded near an oil terminal in the Persian Gulf.

They were assigned to the Firebolt, a patrol coastal ship deployed to Manama from Little Creek Naval Amphibious Base in Virginia Beach.

Pernaselli, 27, a boatswain&#8217;s mate from Monroe, N.Y., and Watts, 28, a signalman from Strawberry Plains, Tenn., were with Norfolk-based Patrol Craft 10. Both died Saturday.

Pernaselli, who enlisted in 1995, is survived by two young daughters.

Bruckenthal, 24, of Smithtown, N.Y., died Sunday. He was assigned to the Miami-based Tactical Law Enforcement Team South Detachment 403. The son of a police chief, he was the first member of the Coast Guard killed in action since the Vietnam War. Bruckenthal lived in Dania Beach, Fla., with his wife, who is pregnant with their first child.

Three other sailors and another member of the Coast Guard were injured in the attack, the first maritime attack directed at Iraq&#8217;s offshore oil facilities since the U.S.-led occupation began more than a year ago.