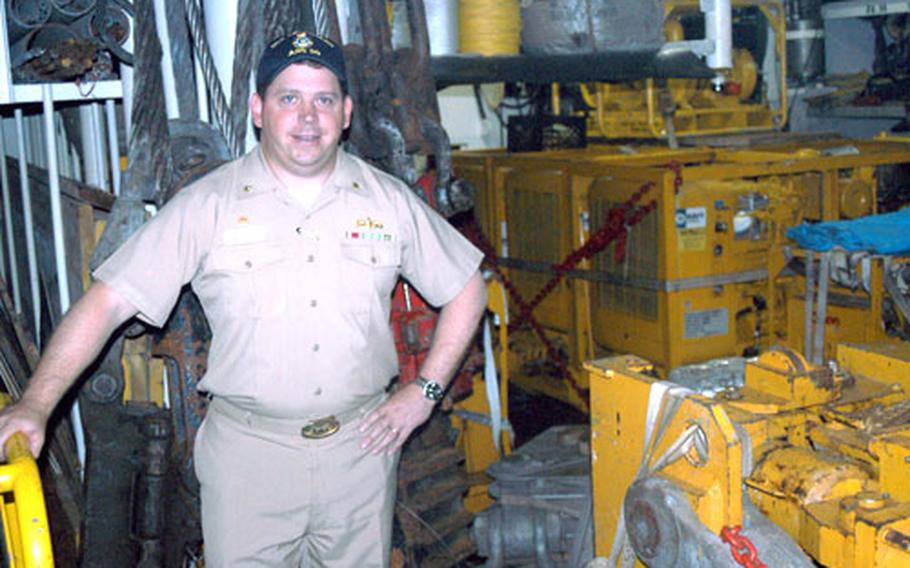 USS Safeguard skipper Lt. Cmdr. Doyle Hodges stands in a part of the ship’s hold used to store many of the tools — cables, winches and more — employed in salvage and repair work. (Juliana Gittler / S&S)

SASEBO NAVAL BASE, Japan &#8212; Whenever a military aircraft crashes in the Pacific and no one is injured, it has a slightly odd effect on one ship&#8217;s crew: a little elation and anticipation.

The ship is the sole 7th Fleet asset that can be sent to lift a crumpled aircraft from the bottom of the deep blue.

The Safeguard is one of the Navy&#8217;s four rescue and salvage ships and is a distinctive place for sailors to work.

But not for much longer.

By September 2007, the Safeguard and its sister ships will be decommissioned &#8212; replaced by civilian mariners and the Military Sealift Command.

The ship can inch itself along sideways on a giant winch, hoist up to 300 tons and tow a carrier.

It has dozens of systems for lifting, fixing, pulling, pumping, electrifying and diving, all in a 252-foot-long frame, a little more than half the size of a frigate.

Working on such a ship offers a few perks. There&#8217;s only about 100 people assigned to the ship, so everyone has the kind of collateral duties that look good to promotion boards &#8212; and it&#8217;s a tight-knit crew, sailors say.

There hasn&#8217;t been a liberty incident as long as anyone aboard can recall, and because it is self-contained &#8212; it can deploy alone &#8212; the Safeguard sails to places bigger ships wouldn&#8217;t dream of.

It also doesn&#8217;t have an integrated combat system, so it&#8217;s been welcomed to more places than bigger, more heavily armed ships, including to the first U.S. Navy bilateral salvage exercise with India last summer, according to officials. The Safeguard will repeat the exercise in a few weeks.

Without the salvage ships, there will be fewer places for Navy divers to work and gain experience. The ship&#8217;s junior officers all are in training to be diving and explosive ordnance disposal officers, and an assignment to the Safeguard gives them surface warfare qualifications and plenty of diving experience.

The junior officers aboard now will be some of the last future EOD leaders to have worked on a ship, helpful experience for working with the surface Navy, said Lt. j.g. Tyler Smith, a diver and the Safeguard&#8217;s operations officer.

But at the end of the day, what might be missed most is what crewmembers describe as a very cool job.

&#8220;We pick things up off the bottom that the military wants back,&#8221; said Petty Officer 1st Class Soren Brown, a diver.

The ship&#8217;s salvage work is only for crashes that are under investigation, so completing a mission aids investigators and makes future aircraft safer. &#8220;It allows them to look at what went wrong,&#8221; Brown said.

The dives are fun, which might explain why the crew is eager to spring into action after something crashes.

The end of an era

Rescue and salvage ships are some of the Navy&#8217;s most versatile and durable. Of the four the Navy owns, one was just decommissioned, another will be this summer, the third in January and the last &#8212; the USS Safeguard based at Sasebo Naval Base, Japan &#8212; in September 2007.

A rescue and salvage ship is a floating repair facility that can patch holes, put out fires, repair engines and tow something as large as an aircraft carrier through open ocean.

But it&#8217;s known much more for its secondary mission: salvage.

To do both missions, the ships have some unusual components and capabilities: multiple anchors, tons of cable, winches and booms, side scan sonar, a remotely operated underwater vehicle, deep ocean heavy lift system and a four-point mooring system that allows it to maneuver in any direction to get right over a site.

For diving, the ship has a surface supplied diving rig with an underwater elevator and a recompression chamber to help divers suffering from decompression sickness.

Their most recent success in May &#8212; retrieving an Air Force F-16 lost in the sea near South Korea &#8212; left one diver with the bends, a serious ailment caused by nitrogen in the blood from changing depth too quickly, said Senior Chief Petty Officer Jeff Sampson, a diver and a Safeguard plank holder.

In addition to training across the Pacific, the Safeguard made a few waves on recent real-world missions:

May 2006: Salvaged a downed Air Force F-16.September 2005: Recovered a crashed Seahawk jet with the Indian navy from 165 feet of water during a salvage exercise. The jet had been missing for 30 years.June 2005: Searched the six-mile suspected location and an additional 75-mile search area near Sumatra, Indonesia, for a downed Marine Corps Harrier jet. The jet was never found.August 2003: Salvaged a 26-ton Marine Corps Amphibious Assault Vehicle from 170 feet of water off the coast of Okinawa.&#8212; Juliana Gittler