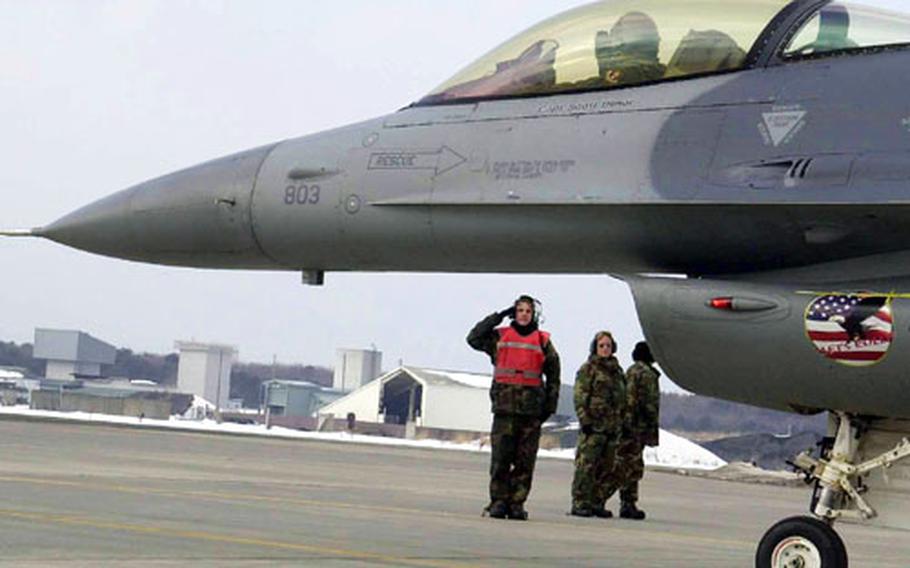 Senior Airman Sean Rafferty, an F-16 crew chief, salutes a Misawa F-16 pilot at the conclusion of the end of runway inspection at Misawa Air Base, Japan. (Wayne Specht / S&S)

Senior Airman Sean Rafferty, an F-16 crew chief, salutes a Misawa F-16 pilot at the conclusion of the end of runway inspection at Misawa Air Base, Japan. (Wayne Specht / S&S) 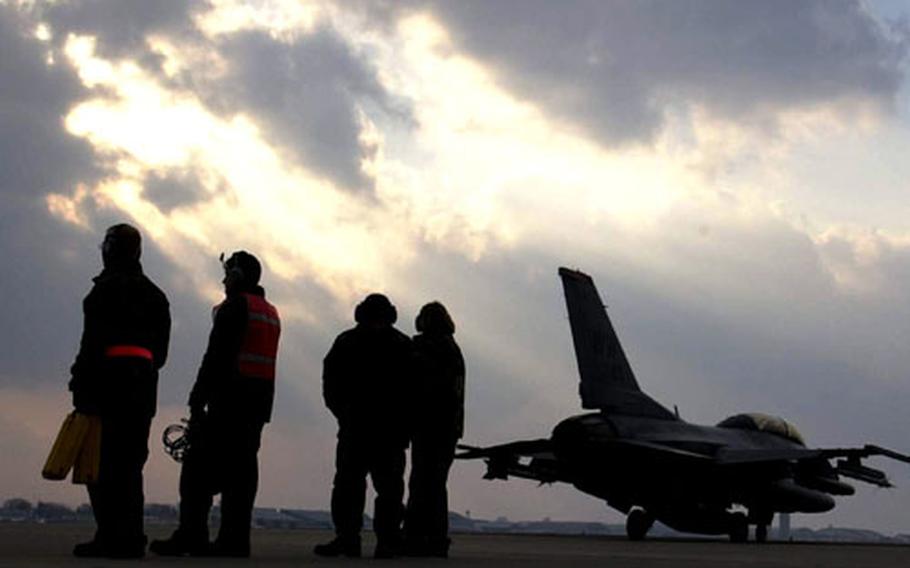 Their vital jobs completed, crew chiefs and weapons loaders watch as a Misawa F-16 leaves for a mission at Misawa Air Base, Japan. (Wayne Specht / S&S) 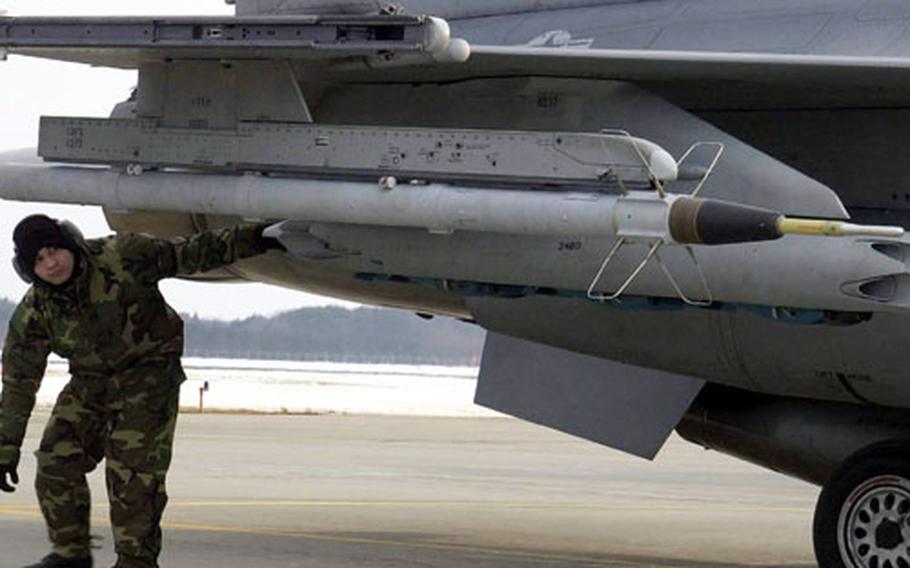 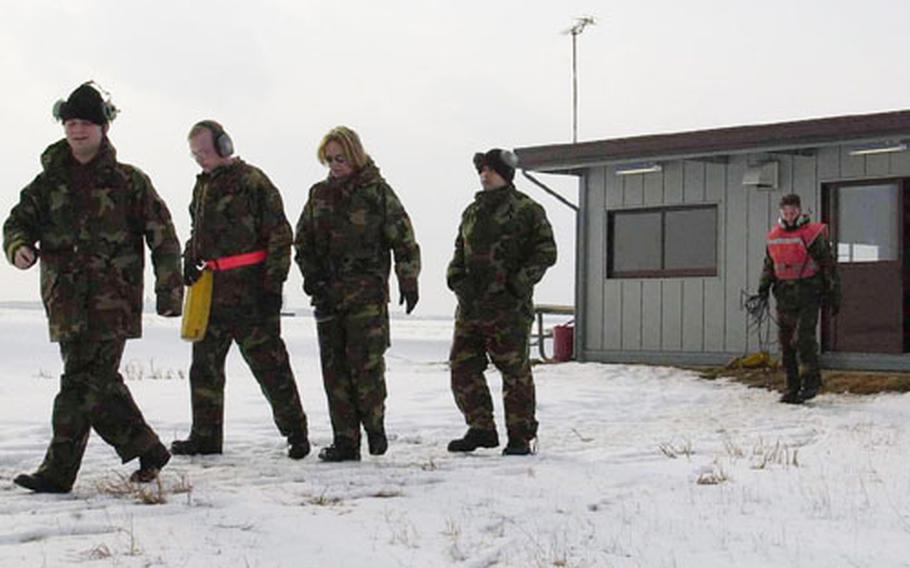 MISAWA AIR BASE, Japan &#8212; They are the last faces F-16 pilots see before going skyward &#8212; fatigue-clad men and women lingering near the end of the base&#8217;s 11,000-foot-long runway in elements that can change from sunshine to a raging whiteout.

Wearing ear plugs and protective headsets, they scurry around F-16s whose engines are idling. They look for panels that might not have been closed or arm inert munitions hanging from the wings.

If pilots leave here with peace of mind, it likely is in part from knowing the end-of-runway crews have given their aircraft the once-over before a push of the throttle kicks the fighters away.

When he isn&#8217;t waiting for F-16s to taxi for takeoffs, or meeting them when they return to base, Rafferty clocks 10-hour days helping a senior crew chief maintain the $21 million F-16 aircraft.

Misawa weather can be fickle.

Snow squalls move in during winter, dropping visibility to near zero and forcing pilots to hold or even sometimes scrub missions.

But weather is seldom a concern, Rafferty said.

A bigger concern is working EOR at night.

Tech Sgt. Shane Holmes, a 15-year Air Force veteran from Durant, Okla., is the EOR&#8217;s noncommissioned officer in charge. He says EOR troops look for many things before giving the pilot a salute: &#8220;critical defects like leaks, panels that didn&#8217;t get closed or pins that didn&#8217;t get pulled that should have. If they don&#8217;t do something right, the sortie can be scrubbed.&#8221;

Up to a half-dozen F-16s can be lined up at EOR for missions. Troops have from one to five minutes to look each one over before aircraft are launched.

&#8220;Things move pretty quickly when nothing is wrong, but sometimes a problem may show up that may or may not be taken care of at EOR,&#8221; he said.

When atmospheric conditions are just right &#8212; a combination of air temperature and humidity &#8212; ice can form on the lip of the F-16&#8217;s engine air intake in the 10 minutes or so it takes to taxi from the fighter squadrons to EOR.

&#8220;If ice builds up thick enough, it can break off and be ingested into the engine,&#8221; said Senior Master Sgt. Dan Otterness, assistant maintenance supervisor of the 35th Aircraft Maintenance Squadron.

If the ice manages to get past the engine&#8217;s first internal stage, Otterness said, it could wreak havoc with the thousands of small vanes on spinning discs further inside the engine, relegating the engine, and the mission, to history.

That adds about 30 minutes to getting aircraft off the ground.

EOR troops also may notice a safety defect that could put the aircraft and its pilot at risk, such as tires showing red cord, indicating they&#8217;re worn.

Prevailing wind conditions determine from which end of the east-west runway pilots take off &#8212; meaning that EOR troops sometimes must jump into a van and hustle to the opposite end.

Each one houses coffee pots for a hot cup of brew and a refrigerator holding cold drinks. There&#8217;s a television set, facsimile machine, telephone and a well-used sofa.

Otterness said things can get hectic for crews if an F-16 returns with a problem.

Working beside crew dogs are weapons loaders, such as Senior Airman Laura Quiroz. She makes sure inert munitions slung on rails underneath F-16 wings are ready for each mission.

Pins that keep munitions securely fastened to the aircraft while on the ground must be pulled at EOR so they fall away when the pilot punches a button on his cockpit control stick.