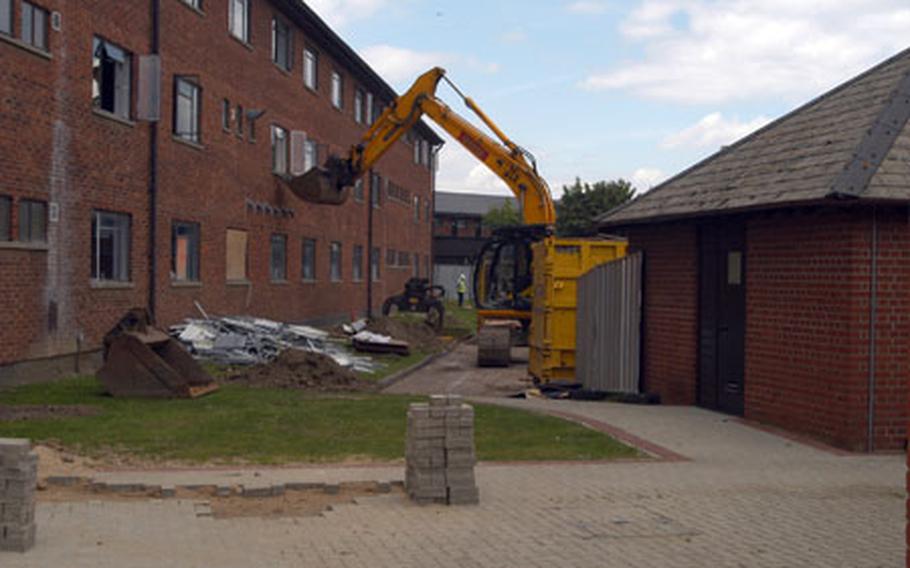 Demolition work began last week on Building No. 402 near the heart of RAF Mildenhall. The building is being razed as part of the base&#39;s long-term plan to construct new dormitories. (Bryan Mitchell / S&S)

RAF MILDENHALL &#8212; Work began last week on the demolition of a dormitory building in the heart of the base in an initial phase of making room for new on-base housing.

Building No. 402, which lies between the Bob Hope Community Center and the commissary, is being demolished by a British contractor for roughly $300,000, according to Emmen Alvarez, chief of base development at RAF Mildenhall.

The building was emptied of occupants more than a year ago, and has since been used only as the staging ground for the base&#8217;s Halloween haunted house. Base officials sold most of the furniture from the dormitory in an on-base sale earlier this year.

It&#8217;s the first of several dormitory buildings slated for demolition in the coming years as part of the base&#8217;s long-term plans to build new on-base living quarters for lower-enlisted airmen, Alvarez said.

For now, though, the tract of land holding Building No. 402 will simply be replaced by a stretch of grass.

There are currently six dormitory buildings with about 768 rooms, Alvarez said, although they are not all occupied.

Across the base at the former Ford Field, construction is under way on the new 100th Civil Engineering Squadron complex that will be complete next year.

The demolition of the current 100th Civil Engineering Squadron headquarters, Building No. 443, is scheduled for 2008, Alvarez said.