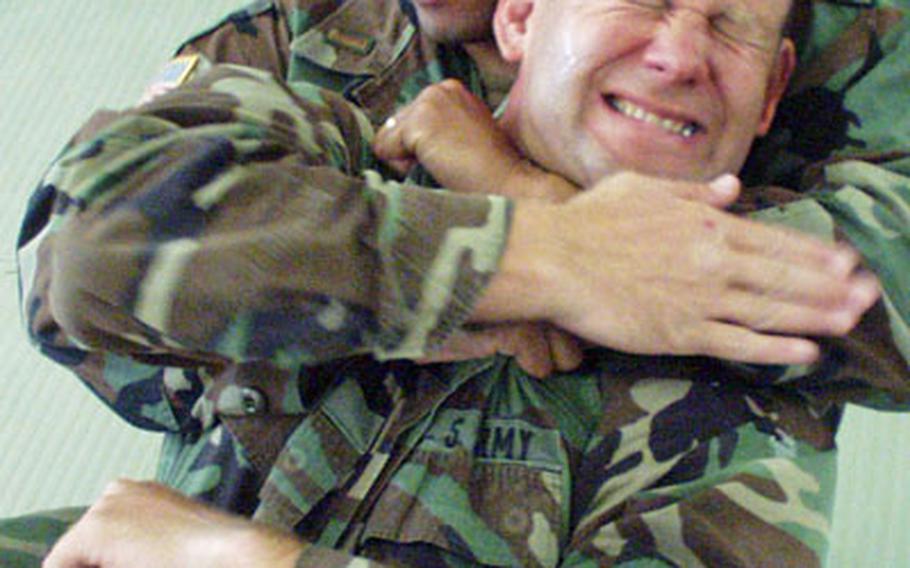 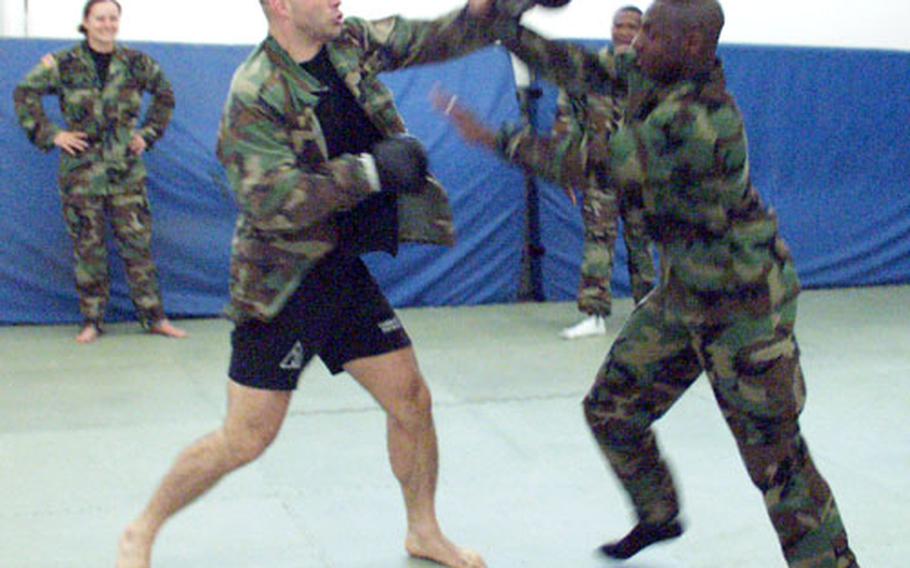 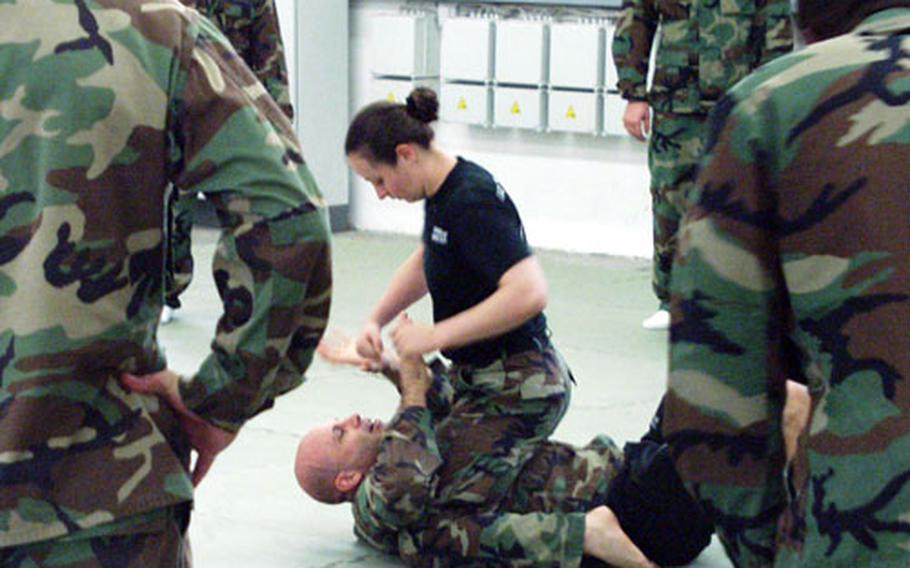 However, they were slapped into submission holds that had them tapping out, much like the Ultimate Fighting Championship bouts that have risen to popularity in recent years.

The training, which is conducted by a husband-and-wife pair of professional fighters, employs many of the same moves seen in UFC fights. It is part of an Army guideline to give soldiers hand-to-hand combat know-how for the global war on terrorism.

For nearly two months, the battalion&#8217;s troops have spent their Tuesday mornings learning a variety of chokeholds, takedowns and finishing moves. The goal is to be able to subdue enemies by using only their bodies.

The practical application of such training would call for a soldier to contain an enemy so his wrists could be zip-tied and he could be brought in for questioning.

To prepare for such a situation, instructors Steve and Christine Van Fleet, both of whom have fought in UFC-type matches, had the soldiers pair off and attempt to get away from each other.

As the troops grasped at each other&#8217;s BDUs, Steve Van Fleet outlined what the enemy would do in that circumstance.

The hand-to-hand combat training is incorporated into the unit&#8217;s physical training regimen. An hour of wrestling, grappling and writhing around on mats ensures a total body workout.

&#8220;When these guys get done with a session of theirs, they&#8217;ve probably used more muscle groups than a regular PT session,&#8221; said Command Sgt. Maj. Keith A. Baughman of the 200th Theater Distribution Brigade.

In late August, Steve Van Fleet will conduct a course that will train 20 soldiers from the brigade to serve as combatives instructors. The newly trained instructors will then be able to train more soldiers.

Sgt. 1st Class Dermot Thomas is all for the training.

Pair keeps fighting in the family

The husband-and-wife duo have competed as professional fighters in Ultimate Fighting Championship-type events around the United States.

Now they are training U.S. soldiers in Germany to subdue enemies with the same sort of moves popularized by the UFC.

And the soldiers are getting the training from one of their own. Christine Van Fleet is a second lieutenant with the 72nd Signal Battalion in Mannheim.

Her cheery exterior masks a fierce inner warrior who has taken out opponents in less than a minute. She boasts seven wins in her nine professional fights.

You would not want to meet her in a dark alley or, for that matter, on a wrestling mat at 7 a.m. inside a warehouse on Mannheim&#8217;s Coleman Barracks.

During training Tuesday, Christine Van Fleet strapped on a pair of boxing gloves while soldiers attempted one-by-one to get her to the ground. She probably embarrassed a few of the male troops by keeping them at bay, but everyone was all smiles at the end of the hour-long training.

The methods and maneuvers &#8212; including headlocks, chokeholds, escape moves and body positioning &#8212; taught by the Van Fleets are definitely tried and true.