Creating the next generation of broadcast 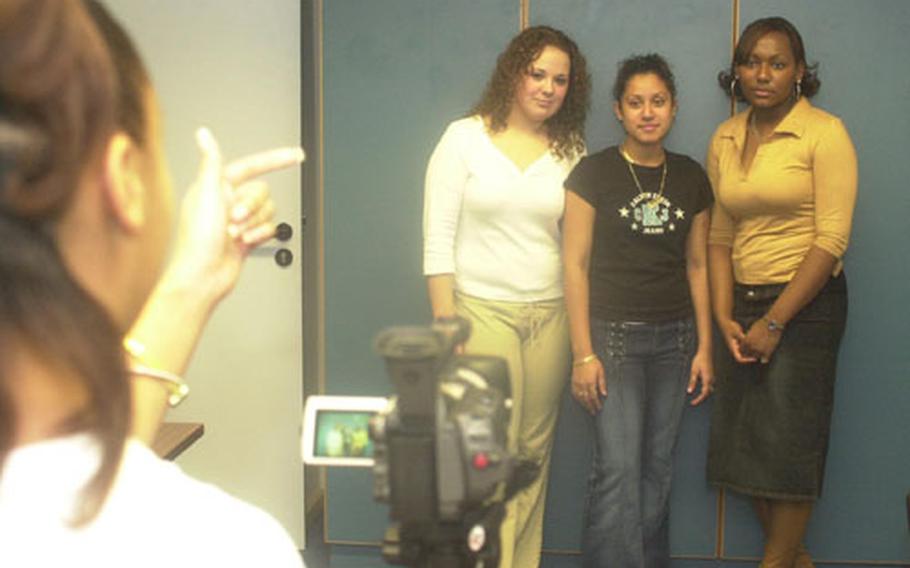 Senior Courtney Parks, 17, back to camera, directs her group as they get ready to shoot a digital video clip that will become part of the music video the students were producing in Baumholder, Germany. From left are senior Erin Malone, 16, junior Brenda Vallejo, 17, and senior Monica Reed, 17. (Terry Boyd / S&S)

BAUMHOLDER, Germany &#8212; Heather Somaini was running around L.A. the other day when she ran into Hugh Jackman.

Before she pitched Hollywood deals for Lions Gate, Somaini was director of talent relations for Fox Kids. But before all the movie studios, the stars, she credits Baumholder American School for her entr&#233;e to the entertainment business.

&#8220;[High school] was a life-changing experience,&#8221; Somaini said in a telephone interview. She was deeply into playing flute and trombone when she entered the school&#8217;s inaugural television production and broadcasting program in 1983. She was hooked, dumping music after teachers Bill Hartline and Isabella Crowell inspired her, even letting her create her own class, Advanced Broadcasting.

Somaini is a graduate of Baumholder American&#8217;s 20-year-old video program, the oldest continuous video program in Department of Defense Dependents Schools. If anything, the program is more vibrant than ever due to a new DODDS Professional Technical Studies initiative said Hartline, who has taught the program since its inception.

Under the technical studies initiative, DODDS is trying to revitalize all its video programs, spending about $400,000 this year to start new classes, and to buy state-of-the-art digital equipment for existing programs, Ridge said.

Currently, there are video programs in 25 DODDS schools in Europe &#8212; more than half of the high schools and middle schools, he said.

Hartline&#8217;s program plays a broad role on this base, home to the 1st Armored Division&#8217;s 2nd Brigade, Division Artillery and a dozen more component units, all of which are currently in Iraq.

Such a broad program demands a lot from the 20 students who take part.

At 6:30 a.m. last Wednesday, a student showed up at Hartline&#8217;s second-floor production studios classrooms, raring to finish a music video. The student body would see the videos via closed-circuit TV, voting on the best. At lunchtime, Courtney Parks and her posse showed up to work on their video.

There&#8217;s Ryan Cruz, a senior whose video about avoiding destructive addictions is dark, gritty and powerful, with production values rivaling anything in MTV&#8217;s rotation.

Over the years, Baumholder American has sent kids to everywhere from local TV news studios to ABC Television and Public Broadcasting Service stations and even to Hollywood.

The business basically boils down to the technical side &#8212; production, editing and camera work &#8212; and the creative side, the storytelling, Somaini said. Students should try to master both. But they also should decide early on which side their talents and interests lie.

School is going to take students only so far, Somaini said. They have to have a fire in their bellies. After college, Somaini moved to Los Angeles with no job, just a list of contacts. But it was what she had to do to really succeed.