Creating his own avenue 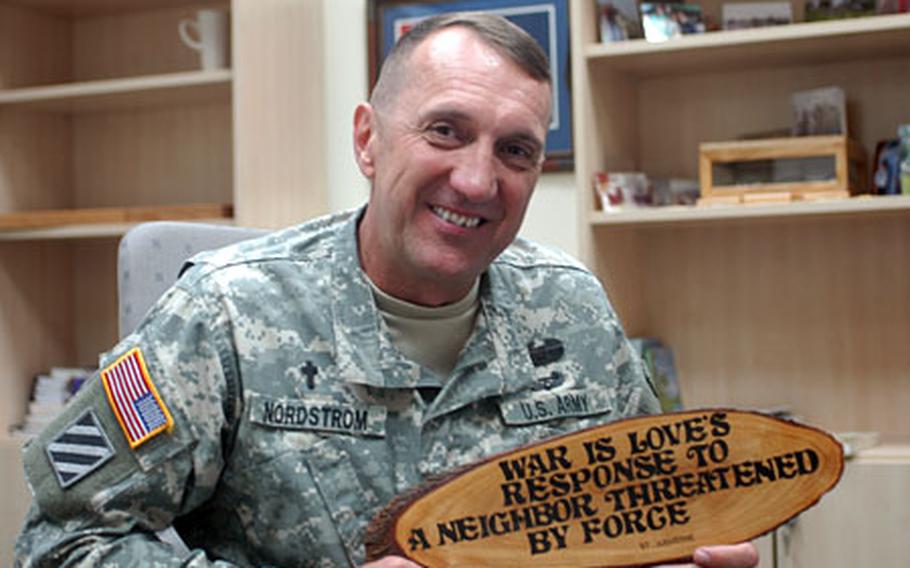 Chaplain (Maj. ) Mark Nordstrom, who has a Mennonite background, holds a plaque given to him by another chaplain in Baghdad. The quote is from St. Augustine, who devised a theory of the "just war." Most Mennonites, however, say Christ teaches peace and non-violence and that participation in the "war machine" is wrong. (Nancy Montgomery / S&S)

HEIDELBERG, Germany &#8212; Mennonites believe that playing any part in the military, which they call the &#8220;war-making machine,&#8221; goes against the teachings of Christ and is wrong.

&#8220;Mennonites believe that violence is never the best answer to problems or conflict, and that Jesus taught us a better way than the way of fighting and wars. They try to take seriously Jesus&#8217; words to love your enemy,&#8221; according to a Mennonite Web site.

Maj. Mark Nordstrom explains it this way: He points to a plaque on his wall a fellow chaplain, a priest, made for him in Baghdad during his 2003 deployment, as part of the 3rd Infantry&#8217;s 1st Brigade, when, he claims, he was the first chaplain in Baghdad.

&#8220;That someone who&#8217;s a military officer would call himself a Mennonite, I think is very strange," said Michael Sharp, a Mennonite from Chicago now working for a German Mennonite group which, with the Military Counseling Network, helps soldiers leave the military, often through conscientious objector discharges.

Nordstrom is accustomed to setting his own path &#8212; or changing it as he sees fit.

Now an officer, he was enlisted for five years, serving as a military police officer. Now active duty, he was formerly in the National Guard. Once a Baptist minister, he is now with a denomination formed in 1969 from a mix of conservative denominations, including the Mennonite Brethren in Christ. And his church, the evangelical, fundamentalist Missionary Church, based in Fort Wayne, Ind., emphasizes evangelism, not pacifism.

Not everyone feels that way, though. Once when Nordstrom attended a church general conference, a missionary to France who was also attending let him know she didn&#8217;t approve of him or the U.S. Army Class A uniform he was wearing.

Nordstrom realized that the Army was the place for him after he left the service as an enlisted soldier and eventually became a minister, then a chaplain and officer in the National Guard. He was mobilized in support of relief efforts after Hurricane Iniki devastated Kauai, Hawaii, in 1992. &#8220;We had a mission. It was what I was made for,&#8221; Nordstrom said.

He went on active duty the next year and hasn&#8217;t regretted it.

Nordstrom, like all chaplains, is forbidden to carrying a weapon, and he sees the irony in that.

He remembers the young soldier he had befriended and read the Bible with, and who died when his Humvee was hit by a roadside bomb. He remembers another who shot himself &#8212; Nordstrom flew at his own expense to New Mexico to perform the service.

And he remembers the soldier whose heart was pierced by shrapnel and was dying as he spoke to her.

Nordstrom has thought about the pacifism that the Mennonites &#8212; who were the first to denounce slavery in the United States and today are renowned for working for social justice and on disaster relief &#8212; believe is required of Christians.