Creating art against the odds 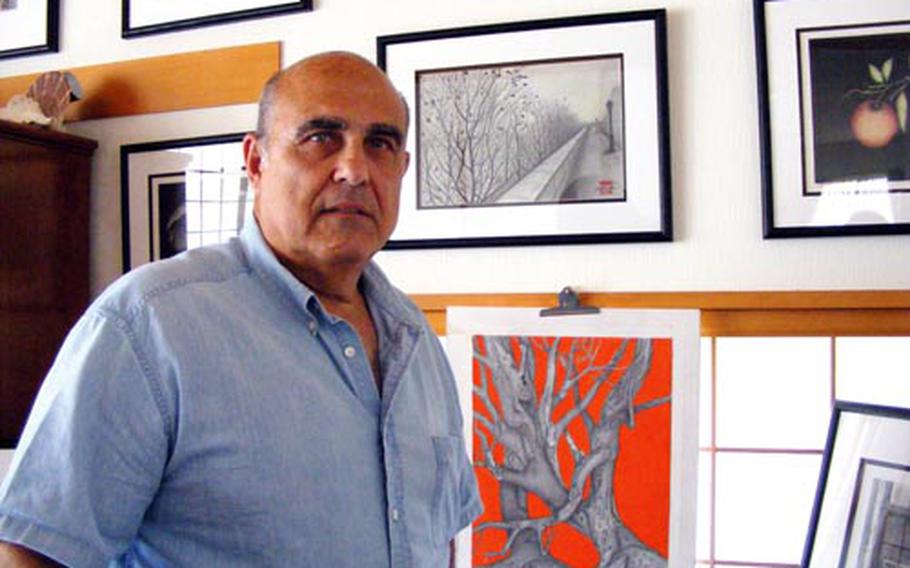 YOMITAN, Okinawa &#8212; Jerry Ceglia is a man who won&#8217;t let perceived obstacles like inexperience or color blindness get in the way of his art.

A little more than two years ago, Ceglia, then 65, took a drawing class at Kadena Air Base at the urging of his wife, Erika Pfauntsch, the base exchange manager.

Ceglia, a retired businessman, hadn&#8217;t drawn anything on paper except for business plans since he was a teenager. But the pencils fit in his hand naturally and he soon progressed from sketching the teacher&#8217;s apple to participating in an art show on Camp Foster that was so successful several artists invited him to join them in a show at the Plaza House Shopping Center in Okinawa City.

Ceglia&#8217;s 67 years include growing up in the Boston projects, graduating from Boston College on a football scholarship and six years in the Marine Corps Reserve. He&#8217;s a former insurance salesman and San Francisco jazz club owner who retired and left California in 1988 after marrying his wife as she climbed up the management ladder of the Army and Air Force Exchange Service.

But retirement didn&#8217;t suit him. When they were stationed in Germany he started a business offering military history tours of World War II battle sites. Later, during his wife&#8217;s tours in Texas and Guam, he worked as a chef and culinary expert.

When they moved to Okinawa in December 2003, Ceglia had no plans other than to "read books, goof around and play."

But Erika had other ideas.

"The only thing I ever drew was some Disney characters on old manila folders for my sister when we were growing up in the Boston projects," Ceglia said. "But I had no real interest in drawing or painting.

"Don&#8217;t get me wrong, I love art. I love going to museums. But I never thought seriously about drawing or painting."

Part of the reluctance might have been because of disappointment he felt his father, a restorer of old buildings who mixed paint to match the original art work, had toward his son&#8217;s inability to see color.

"He was considered one of the best paint mixers in New England and he&#8217;d try to get me to help and I&#8217;d just mess it up," Ceglia said. "He thought I was stupid before we found out I was color blind."

But color blindness does not affect his ability to see shades and translate his insight onto the page.

"And when I need a color, I can always ask someone to give me the pot of red paint," he laughed.

"The works by Jerry projected a strong presence," she said. "Shade and shadow are beautifully expressed. One of his works, for instance, features a giant banyan tree with the roots extending profusely that resembles a human&#8217;s life.

"His art contains philosophical messages that speak to the viewers," she said.

Ceglia&#8217;s wife recently accepted the position of manager of all AAFES stores in Hawaii.

He expects to continue his new career there &#8212; just as soon as he can accept the idea that it just might be a money-making endeavor.

"I can spend hours, days weeks on a piece, sometimes putting a hundred or more layers of graphite on just a small part of the overall piece," he said. "That&#8217;s the joy I get out of it.