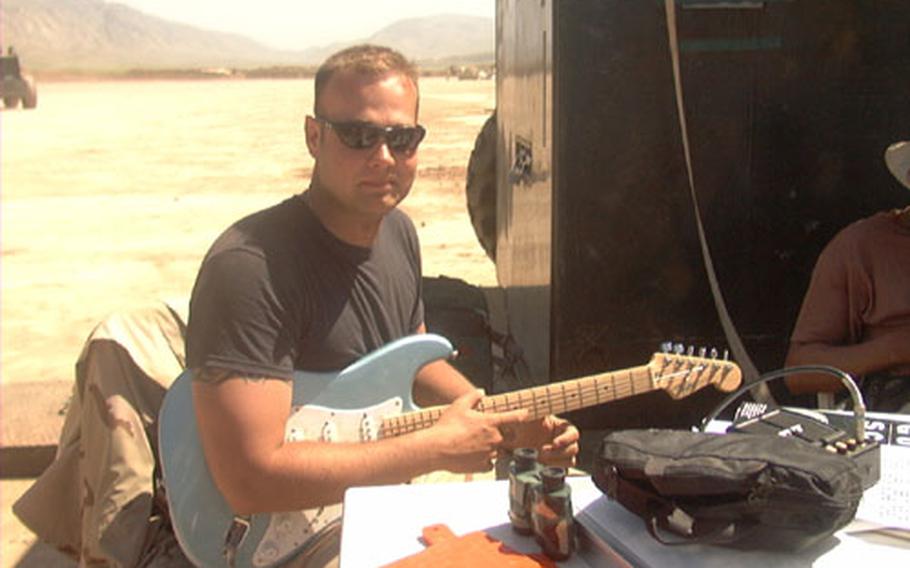 Sunscreen is a must around Bashur Airfield in northeastern Iraq - but so is a rain poncho. For the past couple of days, the sun has been most agreeable to airmen and soldiers based on the airfield. During a recent break in cargo operations, Air Force Staff Sgt. Derk Hamby of the 86th Contingency Response Group, Ramstein Air Base, Germany, strummed in the sun on his electric guitar. (Kevin Dougherty / S&S)

Sunscreen is a must around Bashur Airfield in northeastern Iraq - but so is a rain poncho. For the past couple of days, the sun has been most agreeable to airmen and soldiers based on the airfield. During a recent break in cargo operations, Air Force Staff Sgt. Derk Hamby of the 86th Contingency Response Group, Ramstein Air Base, Germany, strummed in the sun on his electric guitar. (Kevin Dougherty / S&S) 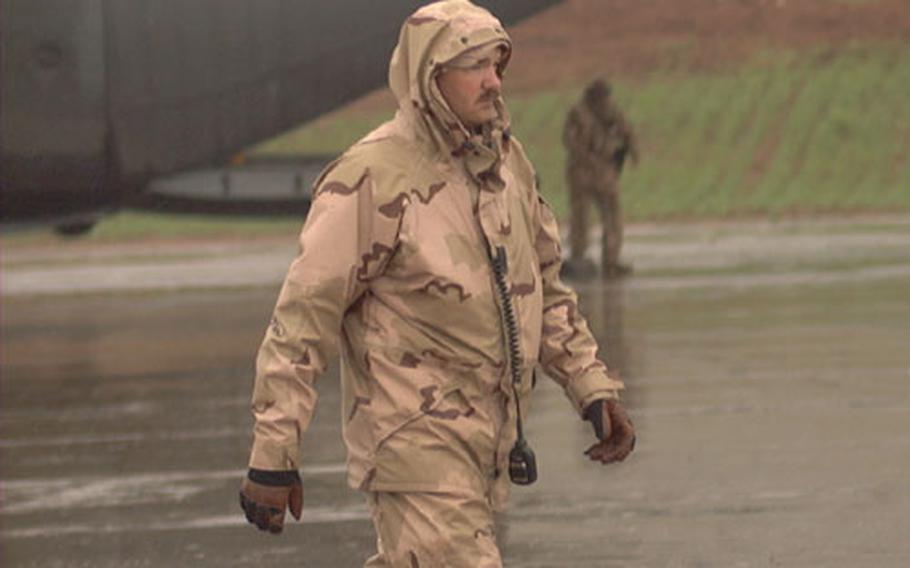 That wacky Iraqi weather has made flight line duty at Bashur Airfield in northeastern Iraq a challenge. Over the past couple of weeks, the airmen of the 86th Contingency Response Group and soldiers of the 173rd Airborne Brigade have experienced extreme cold, extreme heat, strong winds, rain, hail and a sandstorm. On this day, Air Force Master Sgt. David "Baldy" Baldridge, a mission support team chief for the 86th Air Mobility Squadron, Ramstein Air Base, Germany, carries on with the businesss of helping to unload a C-130 Hercules. (Kevin Dougherty / S&S)

BASHUR AIRFIELD, Iraq &#8212; People instinctively talk about the weather. It&#8217;s one of those universal icebreakers.

And a common refrain usually goes something like this: Well, if you don&#8217;t like the weather now, wait a minute and it&#8217;ll change.

But as we all know, Mother Nature doesn&#8217;t surf the weather channels like some hyperactive couch potato toting a remote. Except, maybe, in northern Iraq.

Prior to the Americans&#8217; arrival at this airstrip in northeastern Iraq, the rain clouds rolled in for an extended stay. The Army and Air Force personnel who parachuted in on the night of March 26 had a soft, wet, muddy, mucky landing.

One parachutist said he was relieved to find himself floating in so close to the runway.

Air Force Staff Sgt. Larry Knoll landed a mere 40 yards from the strip, while some of his brethren touched down a mile or more away. The only problem was, Knoll got plugged in knee-deep mud and, in the end, had to backtrack just to find a relatively dry route to the pavement.

According to the weather charts, March and April are rainy months. For those early arrivals, the first few days were cold and damp. On top of it all, they got pelted with hail. Not once, not twice, but thrice.

Eventually, the rain dissipated and the sun appeared.

Spirits soared. Unfortunately, so did the temperature. Medical personnel said they went from worrying about hypothermia to heatstroke in a matter of a couple of days. Soldiers and airmen were advised to drink at least four quarts of water daily just to stay hydrated.

Like the rain, the warming temperatures lingered for several days. The ground dried out. Everybody broke out the sunscreen.

Then a sandstorm from the south swept in on April 5. At one point, the wind was so strong it lifted some tents off the ground.

It was a harbinger of things to come.

A day or so later, the rain returned. The Air Force, which had set up two rows of tents on the concrete edge of the aircraft ramp, soon had a river of water and mud cascading down Main Street, the narrow avenue separating the two tent rows.

Indeed, Albania was a muddy mission. But the weather wasn&#8217;t nearly as temperamental.

During the recent deluge, the footpath to the pee pit resembled the inside of a mud-wrestling ring. Walking the slippery, boot-sucking stretch made a person teeter and totter, as if they had a bit too much to drink.

Down the road and into a field, the Army had six toilet seats for people to park and sit for a spell. People would time their daily constitution to coincide with a break in the weather. Not everybody managed to finish their business before the rain resumed.

The wind, too, seems to have an on-off switch.

The locals say the heavens will probably stabilize next month, though no one here is quite sure whether they&#8217;ll be around to experience it. With the war seemingly winding down, the future status of Bashur airfield is up in the air.

For now, people are just happy the rain has once again lifted. But for how long?

On Thursday, soldiers and airmen awoke to blue skies and a bright sun.

Clotheslines appeared and many took this latest pause in the wacky Iraqi weather to wash the dust and dirt from their clothes.

The clear skies continued throughout the day and into the night. As Friday morning neared, a half dozen aerial porters &#8212; folks that unload cargo planes &#8212; huddled in the dark around an indoor heater they &#8220;secured&#8221; to keep warm on cold nights.

&#8212; Kevin Dougherty is embedded with the Air Force in northern Iraq.