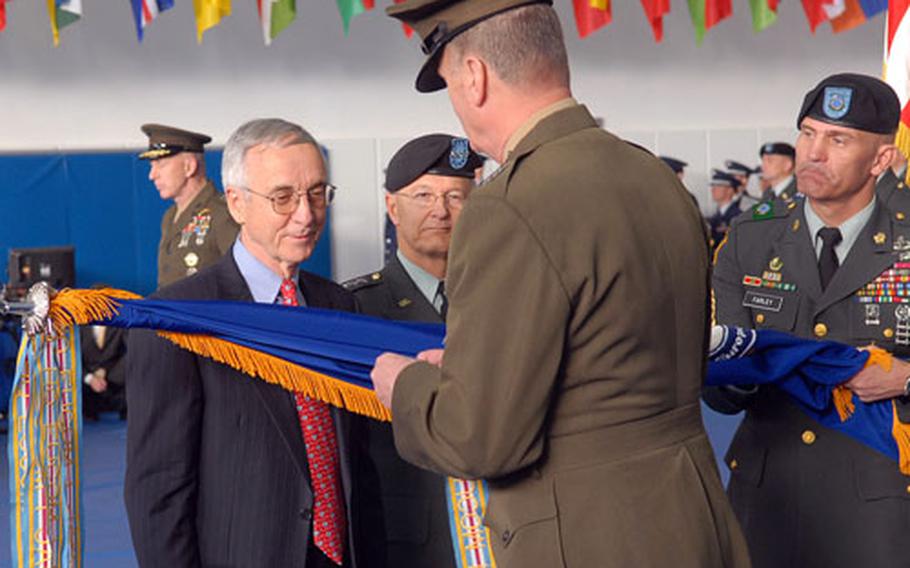 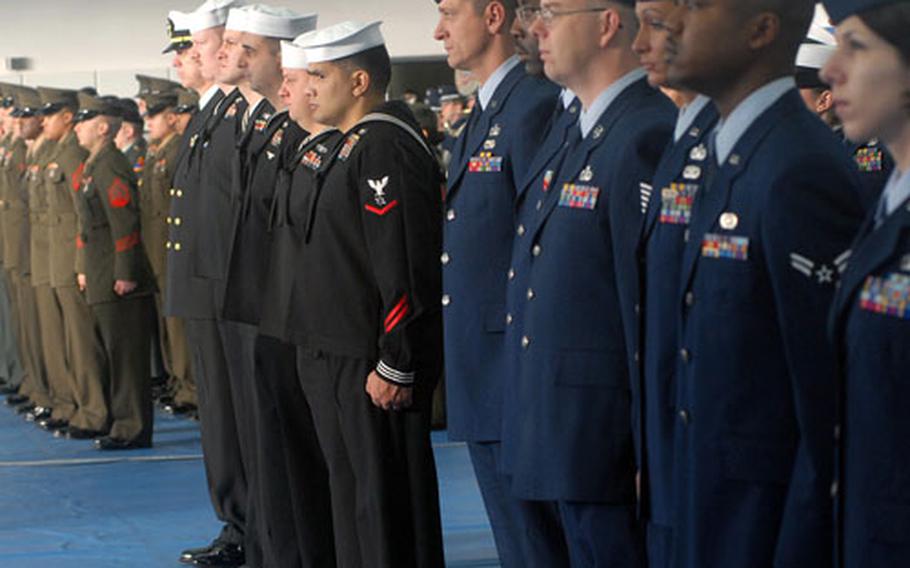 Soldiers, sailors, airmen and Marines of the U.S. European Command at the change-of-command ceremony at Patch Barracks in Stuttgart-Vaihingen, Germany, on Monday. Army Gen. Bantz J. Craddock took over the command from Marine Gen. James L. Jones, who is retiring. (Michael Abrams / S&S) 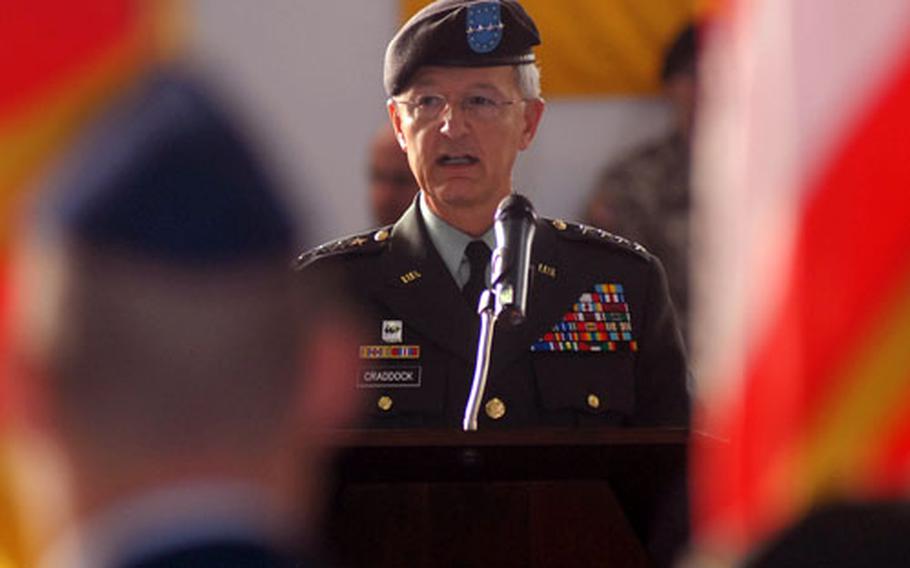 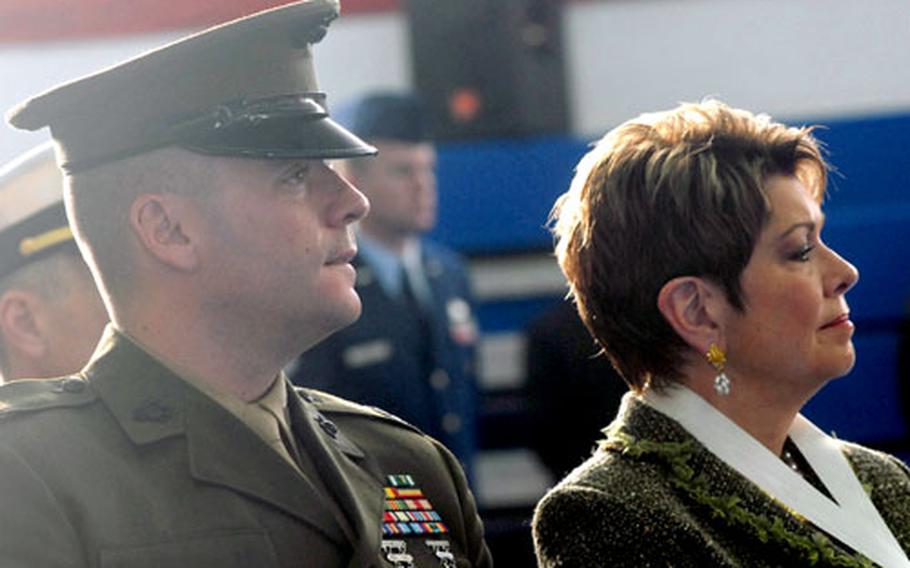 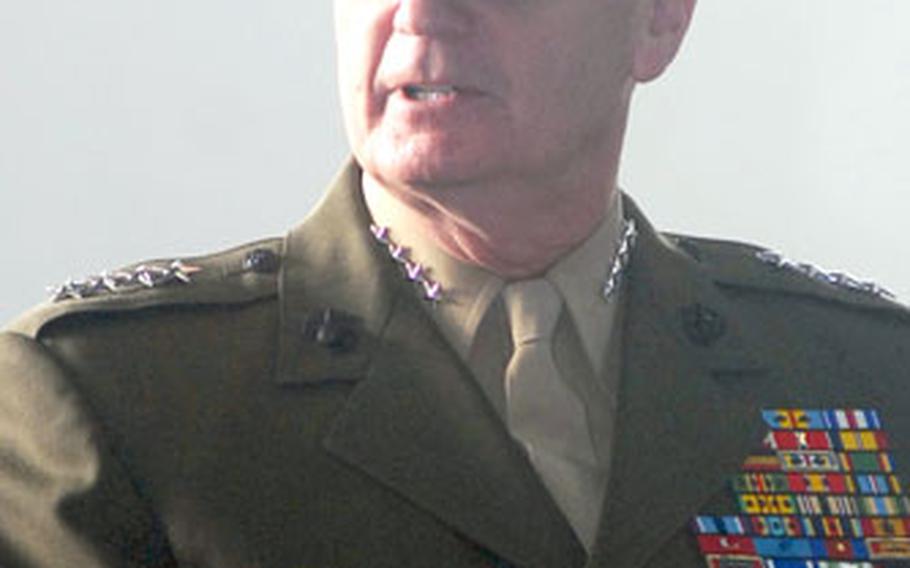 Craddock, 57, who is also taking over as supreme allied commander of NATO forces, replaced retiring U.S. Marine Gen. James Jones at a ceremony at the Patch Barracks gymnasium.

During the ceremony, Jones commended the EUCOM staff, from troops to civilians, for helping him lead the massive combatant command headquarters, which includes all of Europe and parts of Africa and the Middle East. Since assuming command in early 2003, Jones oversaw the military&#8217;s transformation in Europe, as well as a shift in EUCOM priorities.

It couldn&#8217;t have been done without the human factor, he said.

Jones expressed confidence and support for his successor: Craddock comes to EUCOM after a stint as the head of U.S. Southern Command.

Deputy Defense Secretary Gordon England, presiding over the ceremony, told Craddock that while &#8220;you have some very large shoes to fill &#8230; we are blessed to have someone of your caliber and leadership.&#8221;

The U.S. military&#8217;s European Command, or EUCOM, oversees U.S. operations in 92 countries spanning Europe, Africa and Israel. It currently comprises 98,000 troops based mostly in Germany, Italy, Britain and Turkey. About 20,000 of those are deployed in Iraq and Afghanistan.

Craddock was the senior military assistant to outgoing Defense Secretary Donald Rumsfeld before becoming commander of U.S. Southern Command in November 2004. That command is responsible for the controversial detention center at Guantanamo Bay, Cuba, as well as U.S. military operations in Latin America and the Caribbean.

He was an armor battalion commander during the 1991 Gulf War. He is a former commander of the 1st Infantry Division and a graduate of the U.S. Army War College.

Although Jones is slated to retire, England said he expects him to resurface on the world stage at some future point and time.

Jones, who was the 32nd commandant of the Marine Corps before heading up EUCOM, also took time to thank the German government and had some parting words for his successor.

Stars and Stripes reporter Geoff Ziezulewicz and The Associated Press contributed to this report.