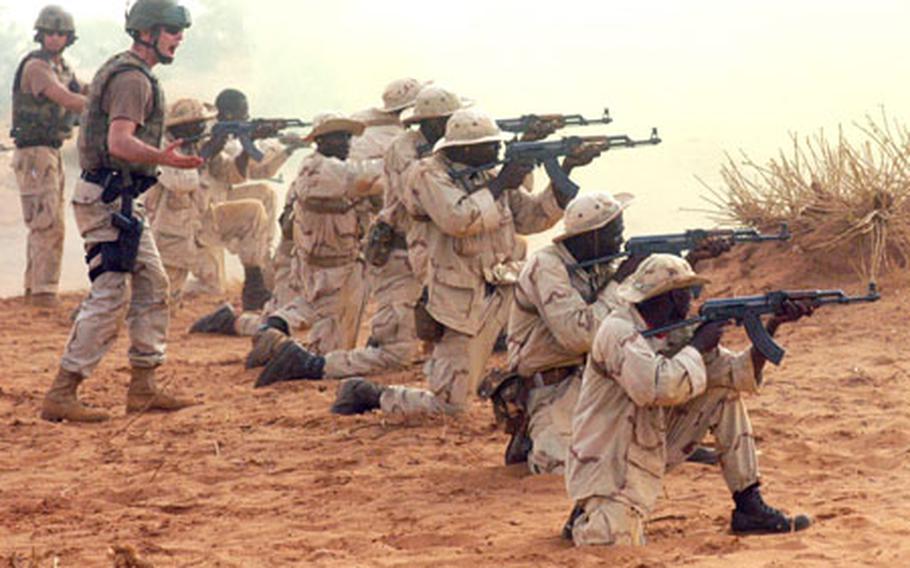 EUCOM Commander Gen. Bantz J. Craddock said that the command may not be able to perform as many military-to-military missions like this one in Niger in 2005 if troops and other assets continue to be deployed to war zones in Afghanistan and Iraq. (Charlie Coon / S&S)

The U.S. military&#8217;s top general in Europe said the continuing rotation of Europe-based troops to higher-priority missions in Iraq and Afghanistan, as well as the relocation of troops from Europe to the U.S., has left his cupboard a tad bare.

Army Gen. Bantz J. Craddock of the U.S. European Command said he is concerned he might not have enough troops to carry out his command&#8217;s top priorities: working effectively with partner nations and waging war if necessary in his area of responsibility.

&#8220;We have very little capacity left after we source the global force pool, if you will, for these ongoing [EUCOM missions],&#8221; Craddock said last week in testimony before the House Armed Services Committee.

&#8220;We try to shape the environment for the future. And that&#8217;s by engagement, that&#8217;s by theater security cooperation &#8212; not assistance, but we cooperate. We send our forces and they cooperate and train and exercise with partner nations.

Craddock, who took over command of EUCOM in December, said coalition-building was one of the military&#8217;s top priorities, but its ability to do military-to-military events in Europe and Africa has waned.

&#8220;Now, we are still doing it to the extent that we have the forces available,&#8221; Craddock said. &#8220;But I will tell you that I reviewed all of the engagement opportunities over the last two years, the exercises that we do, and asked for a listing of everything we had to cancel and why. And it was surprising in its volume.

A Navy-led exercise called Adriatic Phiblex in the Adriatic Sea and the Army-led Victory Strike in Poland were among recent cancellations. Partner-unit engagements, troop exchanges and social opportunities also have diminished, according to a EUCOM spokesman speaking on background.

&#8220;Those relationships that you established were very important, and they provided access, they provided trust and confidence,&#8221; Craddock said. &#8220;And the capacity building, I believe, moved along much faster.&#8221;

But he added that if they were somewhere else, they couldn&#8217;t help out in Europe or Africa should trouble arise.

&#8220;The question is one of capacity,&#8221; Craddock said. &#8220;If something else arises and the forces assigned to European Command are engaged in (other) missions, then I would have to go back to the chairman (of Joint Chiefs of Staff) with a request for forces. And then it falls into another process where the forces must be generated and assigned.&#8221;

Craddock said he has asked his staff to review transformation plans, which were outlined in 2002.

The plan calls for a reduction of Europe-based soldiers from about 62,000 three years ago to about 28,000, to be completed by 2012. Most of the W&#252;rzburg, Germany-based 1st Infantry Division was moved last year to Fort Riley, Kan. The 12,000-soldier, Wiesbaden, Germany-based 1st Armored Division is slated to move to the U.S. during the next several years.

The Air Force and Navy also have made adjustments to their forces in Europe.