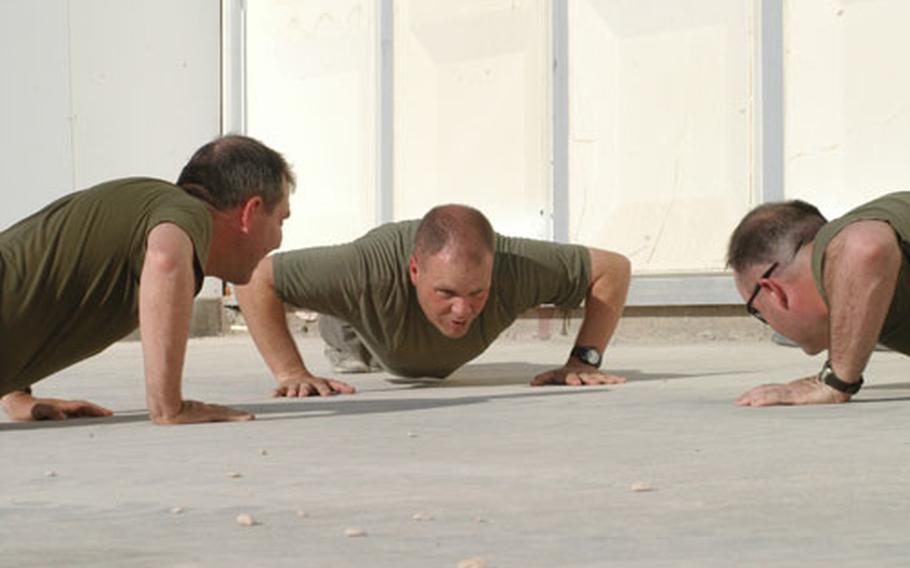 CAMP DUKE, Iraq &#8212; More than a dozen sailors assigned to units throughout Iraq are finding that the Navy&#8217;s traditional initiation process for those selected for promotion to chief petty officer doesn&#8217;t stop in a combat zone.

Three of these sailors are going through initiation at Camp Duke near Najaf.

In addition to the Navy-required CPO indoctrination class and a computer-based management course, the selectees, as they are called, are given Navy- or leadership-related tasks by their chiefs to round out their training.

Some of these tasks, Zabarte said, can be difficult to complete in the desert.

One leadership task, the creation and management of an imaginary division of sailors out of hard-boiled eggs, had to be adjusted. Camp Duke&#8217;s selectees used round rocks, which are poured over the sand and dirt to keep the dust down and are therefore plentiful.

Other tasks range from researching Navy history or uniform regulations. For these, the selectees say that the Internet is a lifesaver, or at least a push-up saver. Failed tasks are usually &#8220;remedied&#8221; by exercise.

The challenges of getting these tasks done have brought the three closer, another goal of the initiation process.

Working through the stressful situations now, the selectees realize, is better than learning after they&#8217;ve already been promoted.

Even with the mistakes, the stress and the extra workload, the selectees say they&#8217;ve enjoyed their initiation.

Each July, the list of those selected for promotion to Navy chief petty officer is released, and those first class petty officers then face the six-week initiation process.

The 3,900 active-duty sailors selected for promotion to chief petty officer this year have specific requirements to complete before they receive their chief&#8217;s anchors Sept. 16.

&#8220;The initiation process is based on the master chief petty officer of the Navy&#8217;s guidance to ensure that the transition is a journey from first class to chief,&#8221; said Senior Chief Petty Officer Ernesto Zabarte, the 11th Marine Expeditionary Unit&#8217;s medical planner at Camp Duke, Iraq.

The selectees must attend a chief petty officer indoctrination course, which covers a wide variety of subjects from naval history to chief&#8217;s uniforms. They also must complete a computer-based management program.

In addition to the required courses, sailors also carry charge books in which other chief petty officers pass on advice and guidance.

Charge books came about during World War II when ship commanding officers were able to promote individual sailors to chief. The prospective chiefs were required to know about the entire ship, so the sailors took the charge books to each chief on board who would then pass on information about their jobs or give guidance on leadership.

Once every chief signed the book, the commanding officer could be reasonably sure that the sailor had an understanding of how the ship operated.

Today the charge books are used less for general shipboard knowledge, but more for leadership advice. It also gives the selectees a chance to individually meet with all of their command&#8217;s chiefs.

Selectees may also manage an imaginary division of sailors, sometimes represented by hard-boiled eggs or even rocks, handling all the paperwork and tasks they could expect as the chief of a real division.