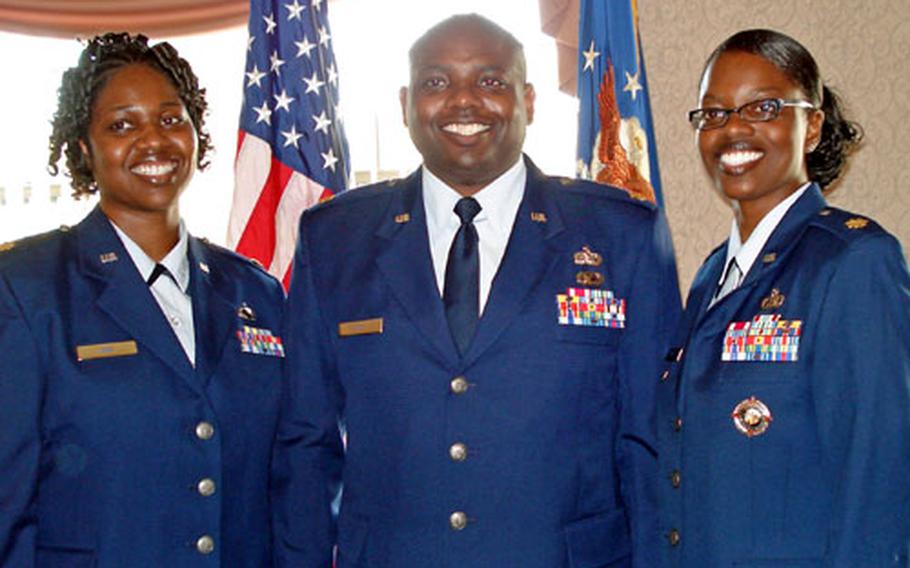 Flying from Europe for the event was an older sister, Maj. Angernette Coy, chief of protocol for European Command at Stuttgart, Germany.

They weren&#8217;t about to miss welcoming a third field grade officer into the family: Cynthia Coy, a budget analyst for Air Combat Command headquarters at Langley, pinned on the rank of major on April 30.

The three Maj. Coys followed in their father&#8217;s footsteps. Richmond Coy retired as a master sergeant after 26 years in the Air Force. Angernette, 36, Steven, 34, and Cynthia, 31, said they enjoyed the Air Force life afforded to dependents, with fond memories of time spent overseas, including Athens, Greece, and Berlin.

As adults, the Coy siblings have never been assigned to the same base, but they always seem to meet people who know or have served with a Coy.

The Coys also enjoy a bit of fun with their shared title.

Steven said having two siblings on active duty has its professional perks. If he needs advice about protocol or finance issues, his sisters are a phone call away.

But when they get together as a family in San Antonio, they rarely talk shop, he said.

Cynthia attributes the siblings&#8217; success to their parents.