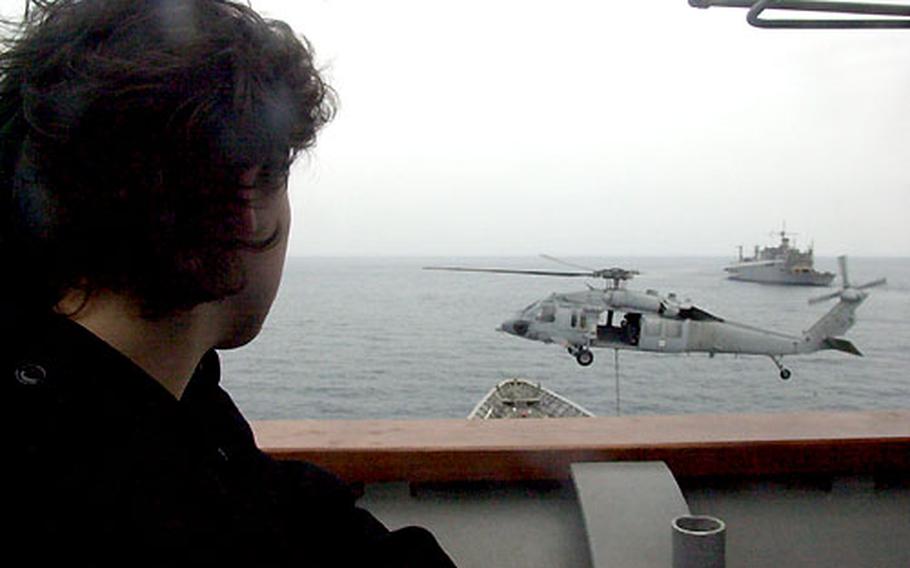 From the bridge of the USS Cowpens, Ensign Rebecca Farley, an engineering training officer, watches a helicopter drop off ammunition from the USNS Flint (backfground). (Kendra Helmer / S&S)

From the bridge of the USS Cowpens, Ensign Rebecca Farley, an engineering training officer, watches a helicopter drop off ammunition from the USNS Flint (backfground). (Kendra Helmer / S&S) Sailors lower ammunition for the Mk 45 gun mount on the USS Cowpens in the Persian Gulf. (Kendra Helmer / S&S) 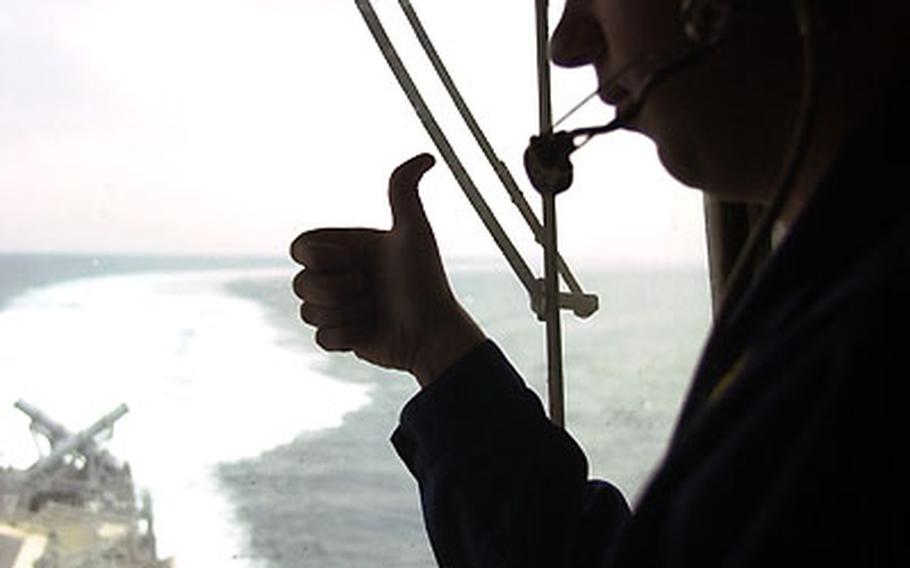 That&#8217;s the sign on the door to the Combat Information Center on the USS Cowpens. Inside the restricted area, under glowing blue lights, a couple dozen sailors focus on screens showing the locations of all vessels and aircraft in the Persian Gulf.

The guided-missile cruiser rotates duty with other ships to command air defense in the increasingly crowded region.

For a few days this month, it was the Cowpens&#8217; turn to track all aircraft, painting a picture of what&#8217;s happening over the waters extending from the Horn of Africa to the Kuwaiti coast.

The core of its air defense &#8212; the Aegis radar and weapons defense system &#8212; can automatically track and fire at any perceived threat.

&#8220;Our strength is being able to bring combat power &#8230; as required from international waters,&#8221; said Capt. Charles Dixon, 44, commanding officer of the Cowpens.

The sailors, based at Yokosuka, Japan, regularly train to use that combat power, including Tomahawk cruise missiles that can hit targets on land hundreds of miles away.

The Tomahawks and other missiles are positioned in the Vertical Launching System. In all, the ship carries 122 missiles in 25-foot white metal cells below deck.

Chief Petty Officer Eric Palmer, 30, a gunner&#8217;s mate, is in charge of maintenance, making sure the system works properly.

Once the missile gets the message, a hatch on top of the cell opens, and the missile fires, sending smoke and flames about two stories high above the deck.

For now though, the only flames are coming from oil wells on the horizon.

Dixon said his crew has gotten into a rhythm at sea.