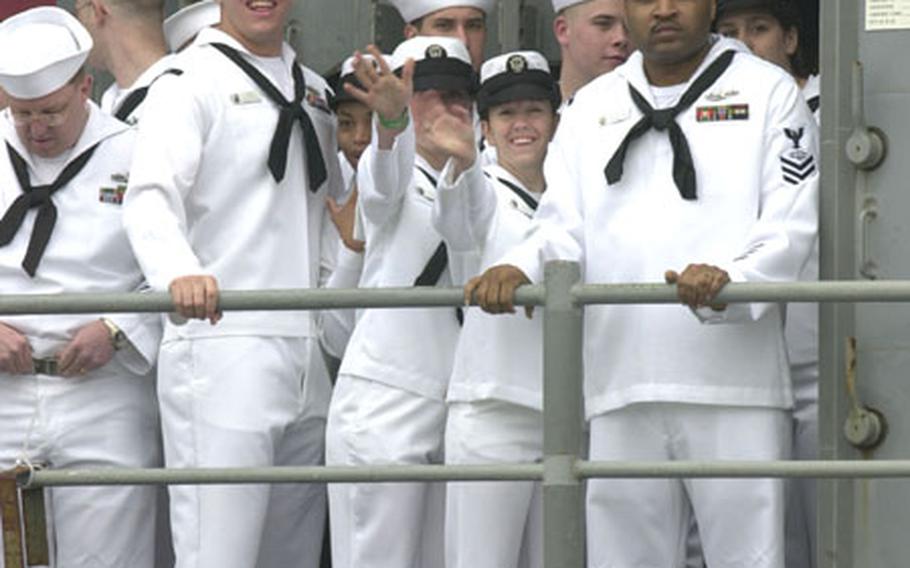 Sailors of the USS Cowpens wave as they return to Yokosuka Naval Base. (Jim Schulz / S&S)

Sailors of the USS Cowpens wave as they return to Yokosuka Naval Base. (Jim Schulz / S&S) 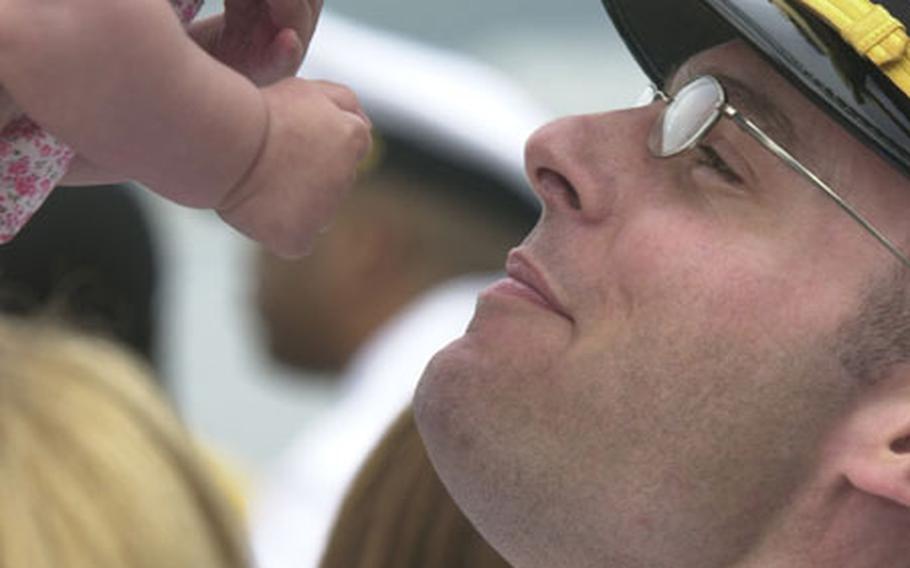 The guided missile cruiser steamed into Yokosuka&#8217;s harbor around 8 a.m. &#8212; with bragging rights: Part of the USS Kitty Hawk battle group, it was the first warship to launch Tomahawk missiles into Iraq on March 20, marking the start of Operation Iraqi Freedom.

But after more than 100 days at sea, the almost 400 sailors streaming across the gangplank weren&#8217;t talking about war.

Some sailors couldn&#8217;t get a word in edgewise: Eager children had much to tell absent parents.

A few had surprises to share &#8212; the new pet dog waiting at home, the story behind a fresh black eye. Others had more urgent news:

Brent said he wanted to go home and watch TV with his dad.

The chaplain credited just one thing with keeping sailors sane: &#8220;The grace of God, I guarantee it.&#8221;

But while Cowpens sailors may have been waterlogged, spouses who were deployment veterans said this cruise was short.

The Cowpens has been away for up to six months and frequently is in and out of port.

But with four young kids, Perry said, much can happen in a short time. For instance, 6-month-old Grace, wide awake in her mother&#8217;s arms, now sits up, smiles, talks, eats food and sleeps at night.

The three Perry boys waved to their dad as the Cowpens docked. When he found them on the pier, they clung to him fiercely.

First, though, the chief engineer had to get reacquainted with his daughter.

Sailors also had the chance to win raffle tickets to Disneyland and eat hot breakfast burritos as part of the welcome-home festivities.

Some, however, had more important business on their minds.