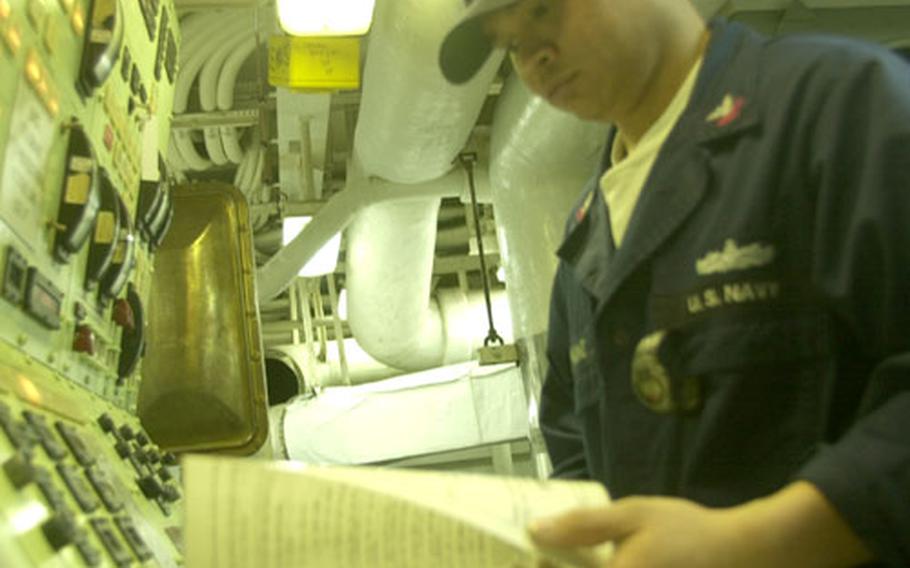 Petty Officer 2nd Class Bounlay Khaiaphone, 25, is a gas turbine technician on the USS Cowpens. He is from Laos, one of 15 nationalities represented by sailors in the engineering department. (Kendra Helmer / S&S)

ABOARD THE USS COWPENS &#8212; Every day on this ship is like a United Nations gathering.

The 400 sailors in the engineering department hail from 15 countries, from France to the Philippines to Venezuela. That means melding several languages, cultures and customs into one purpose.

Several, including Petty Officer 2nd Class Ngoc Le, have applied for U.S. citizenship, a requirement for becoming an officer.

Le, a gas turbine engineer, was born in South Vietnam. Though he&#8217;s a Christian, people sometimes unknowingly do something offensive to his Buddhist upbringing.

&#8220;You chat about countries, learn about lots of other places,&#8221; said the gas turbine technician.

For the most part, the cultural differences aren&#8217;t noticeable, though the accents take some getting used to. Petty Officer 3rd Class Zhenping Wu keeps an English dictionary handy to point out words in case people don&#8217;t understand him.

Native to China, Wu was nervous about serving on a ship.

His family didn&#8217;t want him to join the military for fear he&#8217;d go to war. But he is at war, albeit from the sea. The Cowpens was the first ship from the Persian Gulf to launch Tomahawk missiles against Iraq last week.

Wu plans to get out of the Navy and return to the United States to take care of his parents, who don&#8217;t speak English.

Family has been on the mind of Petty Officer 3rd Class Gueldo Cesar lately. His second daughter was born last month while he was under way.

Cesar, 30, a Haitian, and others said they joined the Navy because of a chance to learn about technology. Learning about other cultures has been an unexpected benefit.

But one sailor said it&#8217;s no big deal to work with so many nationalities.