Novice cowboy Robert Blair takes a ride on a bronc at a rodeo in Stuttgart, Germany. (Courtesy of Monika Lange)

Novice cowboy Robert Blair takes a ride on a bronc at a rodeo in Stuttgart, Germany. (Courtesy of Monika Lange) 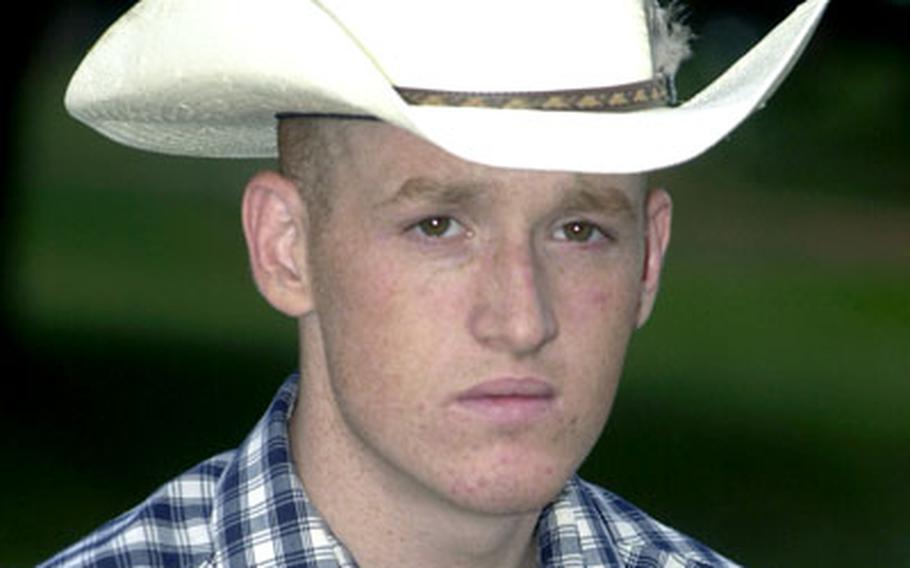 When they get together, their dates last eight seconds.

The gate opens and they come out of the chute, Sally using the massive power in her chest, back and flank to fling Blair like a rag doll.

Sometimes, Blair hears the bell ending his saddle-bronc ride as he hits the ground running to escape Sally&#8217;s hooves. She trampled him during the wild horse race at a rodeo in Berlin a few weeks back.

Most of the time, he&#8217;s still on her back. That&#8217;s pretty good, considering Blair has seen Sally rear up and pull three cowboys off their feet.

His own grandparents back in Central Florida, where he grew up breaking horses at 12, don&#8217;t get it either. Not even his father, Allen Blair, who used to ride rodeo.

It is hard to understand why he and the other soldier/cowboys of the Baumholder Rodeo Team do what they do. Take the risks. Take the beatings. Drive all night after their duty day ends Friday to make a European Rodeo Cowboy Association event in Berlin or Stuttgart. Ride all day Saturday. Camp out in a field that night. Nurse their bruises and cuts on the long ride home on Sunday.

It&#8217;s been a good first season. Blair has stayed on nearly every bronc or bull he&#8217;s tried to ride as he wandered across Germany. He even stayed on Lucky Seven, a bull no one could master, for six of the eight seconds needed to score.

&#8220;Yeah, I think he did better than anybody until somebody finally covered [Lucky Seven] in Berlin,&#8221; Steve says.

But the cowboy life puts a hook in you.

The best cowboys don&#8217;t use strength because there isn&#8217;t a cowboy on earth who can out-muscle a bull. They use smarts. They use weight, balance and cunning to follow the bull jump to jump, he says.