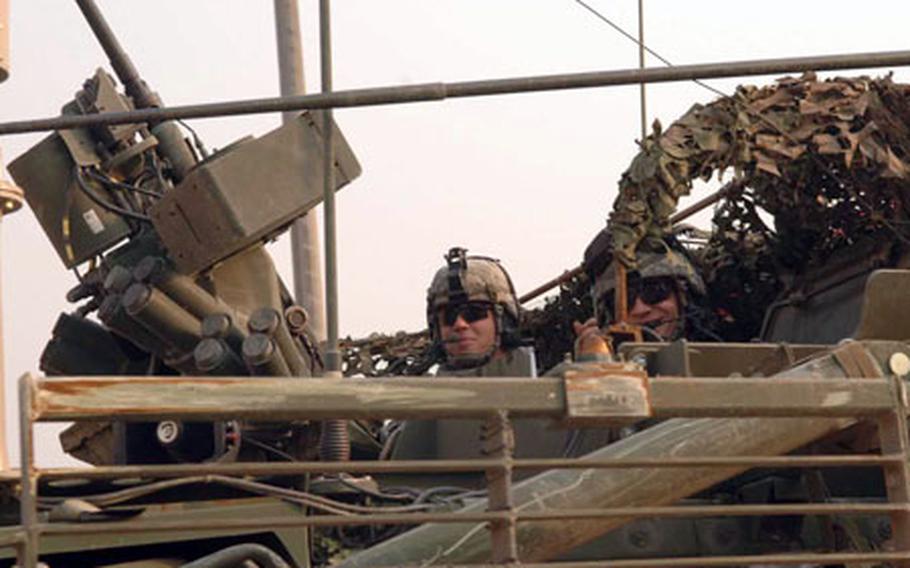 Crewmen in a Stryker wheeled combat vehicle wave as they drive through Forward Operating Base Loyalty in Baghdad, Iraq, after a recent mission. (Lisa Burgess / S&S)

Crewmen in a Stryker wheeled combat vehicle wave as they drive through Forward Operating Base Loyalty in Baghdad, Iraq, after a recent mission. (Lisa Burgess / S&S) FORWARD OPERATING BASE LOYALTY, Baghdad &#8212; As night falls in the gray and drizzling mist, a steel behemoth materializes, followed by two identical mates.

The three hulking gray shadows with distinctive slatted silhouettes run silently toward their muddy corral. They move so swiftly their soldier ground guide is trotting, not walking. Rubber tires splash softly through the deep water on the road.

They were an impressive and intimidating sight Friday.

Today, the so-called &#8220;land-owning&#8221; U.S. military leadership &#8212; the commanders who are responsible for certain areas in Iraq and every U.S. military operation that happens inside those borders &#8212; are clamoring for Strykers, which are faster than tanks and said to be well-suited for urban combat.

Instead of belonging to a certain division, and working only for that unit, the Stryker combat teams go from operating base to operating base, and mission to mission. When a job is finished, they move on.

This works out because under the Army&#8217;s so-called &#8220;transformation&#8221; effort, Stryker units, which can serve as cavalry scouts, infantry, or some other purpose, are interchangeable.

The 2nd Battalion, 17th Field Artillery Regiment at FOB Loyalty, for example, has worked with three Stryker companies on a range of missions since Dec. 28, according to Capt. Andy White, 28, the 2-17th&#8217;s operations officer.

Capt. Ben Richards, 30, of Idaho Falls, Idaho, who commands B Troop, 1st Squadron, 14th Cavalry Regiment, can hardly recall how many places the troop has been since it got to Iraq last July.

Before Richards took command last December, B Troop started its tour at Haditha. Then it spent three weeks doing reconnaissance in the open desert in the western Euphrates Valley. It has been to Mosul, Taji and for the past five weeks all over Baghdad, working on both sides of the Tigris River.

For Stryker soldiers, it means living, working, and fighting in the vehicles they call &#8220;up-armored Winnebagos&#8221; for days and sometimes even weeks at a time.

&#8220;We spend more time in our trucks than most people do in their hooches,&#8221; said Pfc. Edward Lyall, 22, of Melrose, Mass., a Stryker crewman who is in the 1st Squadron, 14th Cavalry Regiment, 3rd Brigade, 2nd Infantry Division, from Fort Lewis, Wash.

The Stryker crewmen learn quickly to settle into their steel homes, sleeping on the benches that line the truck&#8217;s sides when they can, and using the 110-V connections inside to plug in commercially bought hot-water heaters and make cups of instant cocoa and coffee, Richards said.

Just how tight the fit is depends on which kind of Stryker you&#8217;re in and what your job is.

An infantry Stryker company usually has about 170 soldiers and 20 Strykers, for example, while a cavalry company has 98 soldiers and 17 Strykers, Richards said.

So when it comes time to roll up and catch some sleep, the infantry variant might have to accommodate 11 soldiers, including the driver and gunner. Several soldiers will end up outside, unless the weather is so terrible or conditions too dangerous that it&#8217;s not practical.

In the cavalry scout vehicles, meanwhile, &#8220;you can sleep four or five guys in there, lying down,&#8221; plus the driver in his own compartment, Richards said.

Surprisingly, instead of making crewmen want to kill each other, the cramped quarters &#8220;really help promote social cohesion,&#8221; Richards said. &#8220;The best way to do that is to put soldiers together and give them a difficult common task.&#8221;

The Stryker team tends to focus on taking care of each other, not their differences, Richards said. &#8220;Guys go at it, but it&#8217;s quickly forgotten and forgiven.&#8221;

Richards says that once his troops get back to Taji after a heavy run of operations, and the necessary maintenance is done on the trucks and equipment, &#8220;We try for 18 to 24 hours when we really don&#8217;t do much. A lot of sleep, and Internet.&#8221;