Covering the front lines from the sky 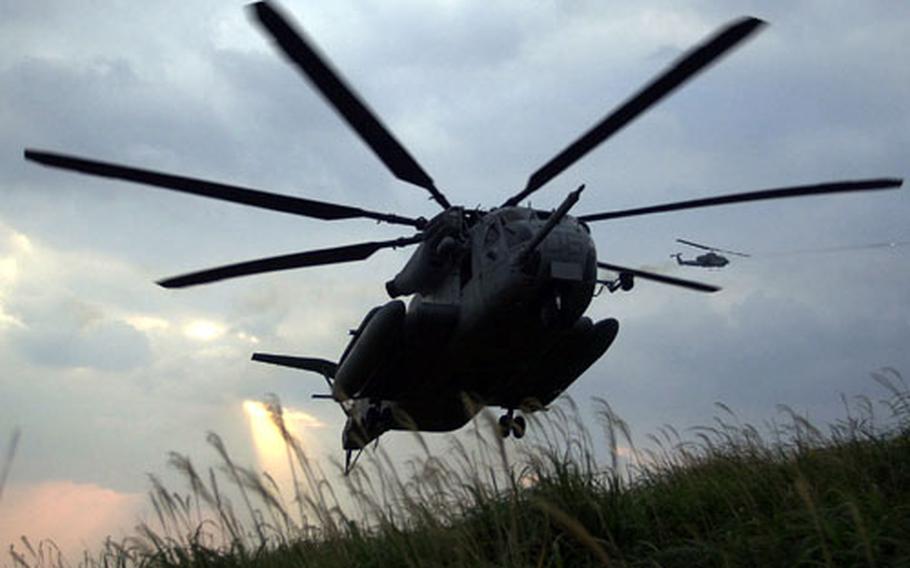 A Marine CH-53E Super Stallion flares out for a landing while a AH-1W SuperCobra in the background fires rockets to suppress targets during insert and extract drills off Okinawa. (Mark Oliva / S&S)

A Marine CH-53E Super Stallion flares out for a landing while a AH-1W SuperCobra in the background fires rockets to suppress targets during insert and extract drills off Okinawa. (Mark Oliva / S&S) 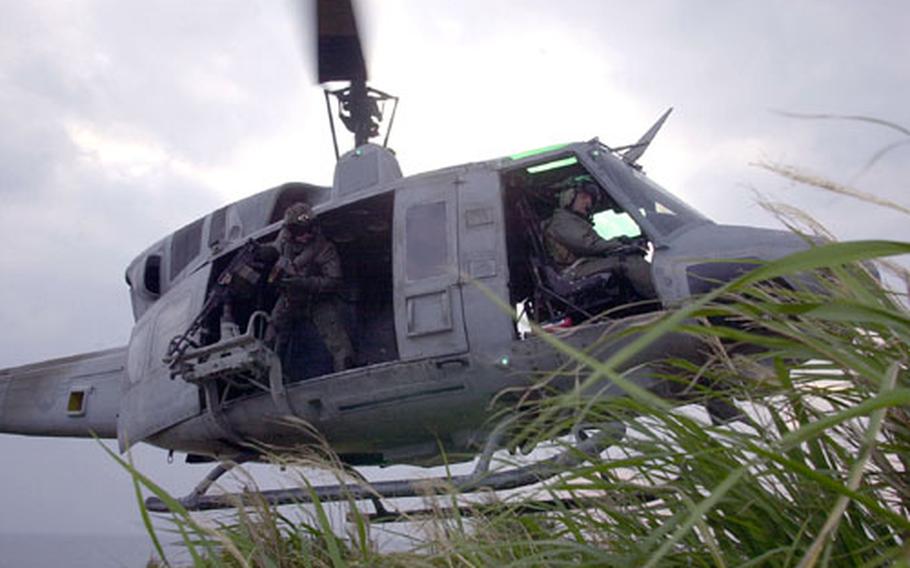 Pilots and crews of a UH-1N Huey lift off after inserting an infantry team off the coast of Okinawa. Marines from Marine Light Attack Squadron 367 practiced dropping off and picking up infantry while under fire. (Mark Oliva / S&S) Marine Cpl. Paul O&#39;Brien, of Marine Light Attack Squadron 367 and a crew chief on a UH-1N Huey, fires his M-240G machine gun during hot insert and extract drills off the coast of Okinawa. (Mark Oliva / S&S) Marine Cpl. Paul O&#39;Brien awaits arrival at the target while in a formation flight off the coast of Okinawa. (Mark Oliva / S&S) 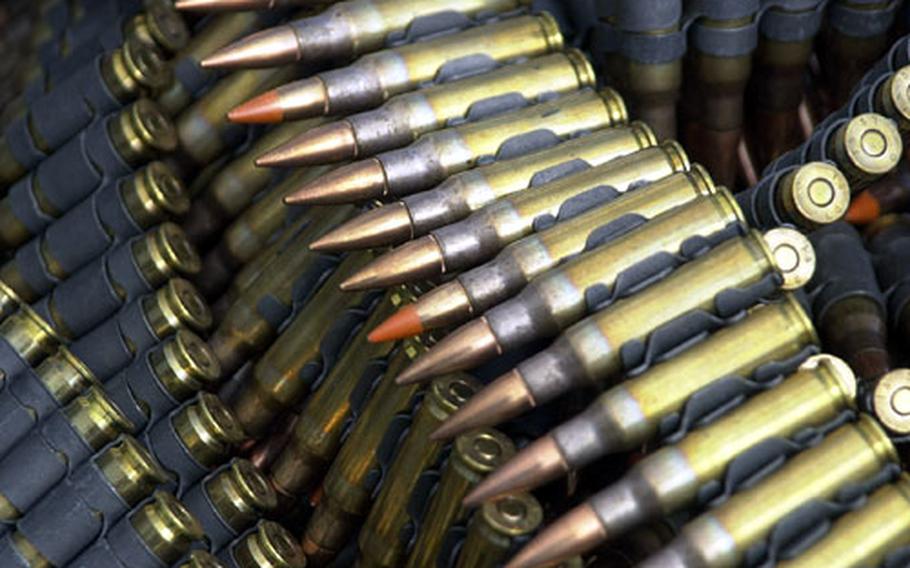 Belted 7.62mm rounds dumped in a heap prior to being loaded in the M-240G machine guns mounted on the doors of a UH-1N Huey. (Mark Oliva / S&S)

FUTENMA MARINE CORPS AIR STATION, Okinawa &#8212; Marine Cpl. Anthony Joseph hopped out of his UH-1N Huey. Dressed head-to-toe in an olive-drab fire-resistant flight suit, he bent over a large green box and popped off the lid.

Inside were more than 1,000 bright brass rounds, every fifth bullet a tracer, tipped with orange. Looking up, he smiled.

Joseph pulled the linked ammunition from its box and laid it on the ground. The wind was whipping and the air was unusually cold for Okinawa as low clouds swept continuously across the sky.

This wasn&#8217;t a normal flight for Joseph or the other five crew chiefs and six pilots. They were gearing up for a special mission &#8212; practicing the transit of Special Forces soldiers while under fire and shooting guns and rockets.

The training was a departure from the normal role for Marine aviators and crews, said Lt. Col. Max Morton, commander of Marine Light Attack Squadron 367, which features a mix of Hueys and AH-1W Super Cobras. The helicopters are normally reserved for large-scale anti-armor and command and control flights. But Morton borrowed a few pages from the Army and some history lessons to upgrade the mission capability for his fliers.

He based the requirements on his exchange tour with the Army&#8217;s 160th Special Operations Aviation Regiment &#8212; the Nightstalkers. There, he flew in much more intense conditions &#8212; at night, under fire and in all weather &#8212; to deliver and cover forces in tight, confined spaces.

He expects his Marines to do the same.

So precision becomes paramount, Morton explained, as pilots must maneuver in small areas, often providing cover fire over the top of friendly forces in jungle and urban terrains. Machine-gun, cannon and rocket fire from the door gunners and pilots has to be more exact, or &#8220;danger-close,&#8221; with allies just outside the reach of explosions.

Seventy-five percent of all shots must land within 10 meters of the target. Nothing can hit more than 50 meters away &#8212; a tricky proposition when firing from a moving aircraft without precision guidance.

&#8220;The shots just have to be better,&#8221; Morton said. &#8220;The visibility many times will be restricted, and friendlies will be engaged with the enemy. When it gets like that, we have to come in close proximity to deliver ordnance.&#8221;

The twin-bladed helicopters teamed up with a CH-53E Super Stallion and a team of Special Forces soldiers for the flight out to Whiskey-174, a small island used as a target range by the pilots. They flew in close formation, Hueys in the lead with the large transport Super Stallion trailing and the Cobras flying on the flanks.

With Whiskey-174 in view, Cobra pilots broke loose, flying ahead and clearing the area with sweeps of the island. Moments later, the Hueys dropped in, with crew chiefs blasting targets with their machine guns as soldiers poured out the aircraft&#8217;s side. The Super Stallion followed and the soldiers set up a perimeter, calling in close-air-support missions to the Cobras orbiting overhead.

The practice was fairly simple. Soldiers called over the radio for the fire support, identifying themselves with an orange panel parker and the target with their own tracer fire from M-4 carbines. The Cobras swooped in, brass shells falling from their 20mm cannons and rockets zipping across the sky, landing less than a stone&#8217;s throw from the rusted hulk targets.

Reiss said the squadron took the crawl-walk-run approach, conducting the drill by themselves, with other aircraft and finally, troops on the ground.