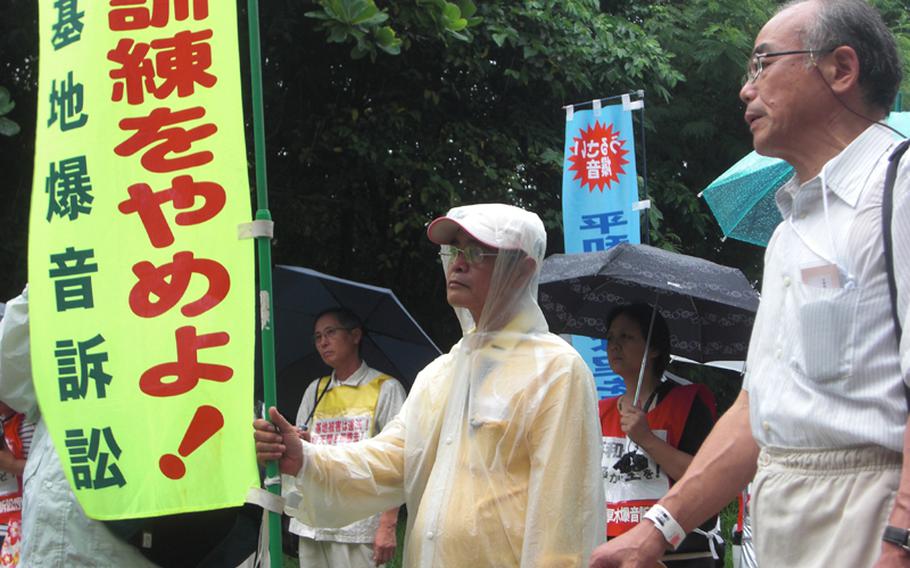 Eisho Nakandakari, center, from Ginowan, Okinawa, stands among about 200 residents and supporters Thursday outside the Fukuoka High Court branch in Naha. The banner he holds demands a stop to flight operations at Marine Corps Air Station Futenma in Ginowan. (Chiyomi Sumida/Stars and Stripes)

Eisho Nakandakari, center, from Ginowan, Okinawa, stands among about 200 residents and supporters Thursday outside the Fukuoka High Court branch in Naha. The banner he holds demands a stop to flight operations at Marine Corps Air Station Futenma in Ginowan. (Chiyomi Sumida/Stars and Stripes) 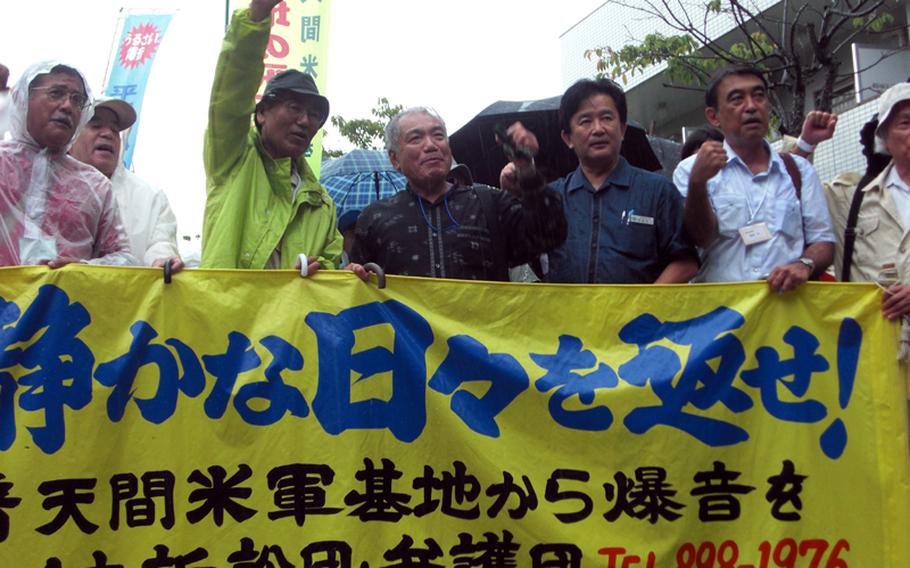 About 200 residents who live near Marine Corps Air Station Futenma in Ginowan, Okinawa, and their supporters rally in front of Fukuoka High Court in Naha on Thursday before the court delivered a ruling on an eight-year-old class-action suit over noise generated by the air base. (Chiyomi Sumida/Stars and Stripes)

During its ruling here Thursday afternoon, the local branch of the Fukuoka High Court more than doubled the damages awarded in June 2008 to residents who live near the air station and said it was convinced the base, located in the middle of urban Ginowan, was a hazard to the community.

However, the three-judge panel denied the plaintiff&rsquo;s request to end night flights.

Both the U.S. and Japan have agreed MCAS Futenma poses a hazard. In 1996 the two governments agreed to close the base once a suitable substitute was found elsewhere on Okinawa.

During a visit to Futenma in 2003, then Secretary of Defense Donald Rumsfeld commented that the air station was &ldquo;an accident waiting to happen.&rdquo; The court ruled Thursday that the &ldquo;mental anguish&rdquo; of the Ginowan residents became a reality a year later when a Marine helicopter crashed onto the grounds of Okinawa International University, located adjacent to the base.

In 2002, some 400 residents sued the Japanese government for damages they claimed were caused by excessive noise attributed to flight activities at Futenma. Because of a lack of zoning laws, homes and businesses were built adjacent to the base fence line in the decades following World War II.

In June 2008, a lower court awarded the residents 147 million yen in damages --- then the equivalent of $1.3 million --- for &ldquo;mental and physical suffering.&rdquo;

Thursday&rsquo;s ruling increased the damages to 369 million yen (about $4.2 million at the current exchange rate) that the Japanese government should pay to the 404 residents.

Presiding judge Yoshinori Kawabe said that low-frequency noise caused by helicopters at the air station added to their mental anguish. He said the Japanese government failed to take appropriate measures to abate noise levels, which were ruled as surpassing environmental standards by the lower court.

However, the judges upheld the lower court&rsquo;s refusal to ban flight operations between 7 p.m. and 7 a.m. Kawabe said the Japanese government had no control over U.S. military operations at the air station.

Outside the court, about 200 residents and their supporters gathered before heading for the Okinawa Defense Bureau in Kadena to protest that part of the ruling.

Shimada said he intends to file an appeal with Japan&rsquo;s Supreme Court.

Ginowan Mayor Yoichi Iha, one of the plaintiffs, said that he was pleased because the court acknowledged his claim that the air station lacks safety standards.

&ldquo;The ruling renewed my determination to work to close the air station,&rdquo; he said.

Stars and Stripes reporter David Allen contributed to this report.