Course trains Iraqi NCOs to take the reins of leadership 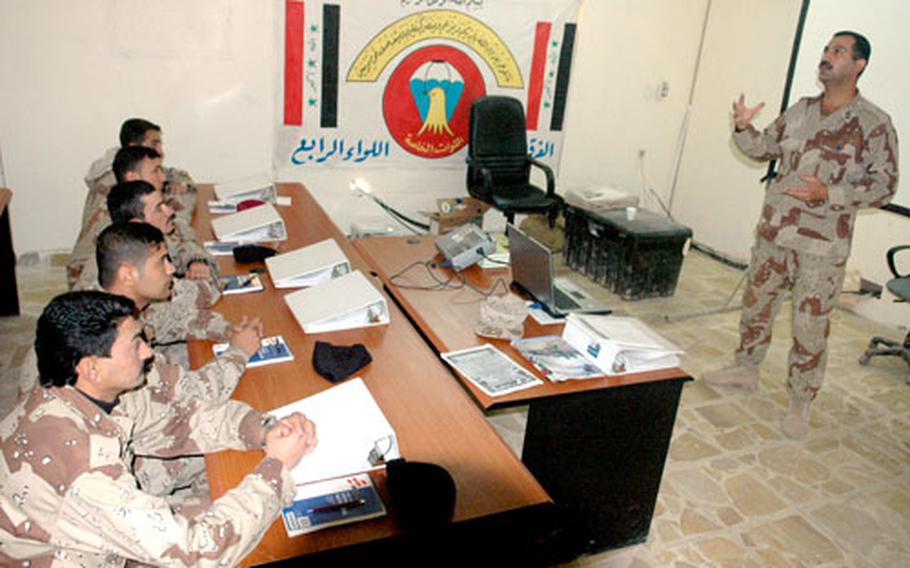 MAHMUDIYAH, Iraq &#8212; As the classroom lights flickered on and off with sporadic electrical power at the Iraqi army camp, Iraqi army Sgt. 1st Class Wisam Mohammed tried to teach fellow Iraqi soldiers how to be effective noncommissioned officers.

&#8220;How do you check a soldier&#8217;s daily appearance?&#8221; Wisam asked the room of 15 Iraqi soldiers who were recently promoted and will soon oversee squads of mostly untrained and undisciplined Iraqi soldiers.

The monthlong class, designed by American soldiers, aims to address the Iraqi army&#8217;s most glaring organizational weakness &#8212; a corps of NCOs who have limited responsibilities, take little initiative and play virtually no role in the day-to-day management of their units.

It is one of the most common complaints among U.S. soldiers assigned to train Iraqi soldiers. For a mix of cultural reasons and habits developed under the previous regime, the Iraqi army is essentially filled with two types of men: the officers who hand down orders and soldiers who follow them.

What they need, many American troops say, is an NCO corps in which older and more experienced soldiers take responsibility for training lower-ranking troops and executing missions outlined by officers.

&#8220;The NCOs are the backbone of our Army. They are the ones who make things happen,&#8221; said Staff Sgt. Justin Seimet, who works with the Military Transition Team for the 101st Airborne&#8217;s 2nd Brigade Combat Team.

Setting up capable, independent security forces is key to stabilizing the country and preparing for U.S. troops to leave in large numbers, U.S. military officials say. The NCO class is one of many types of training taking place across Iraq.

The NCO training starts with the most basic skills and aims to realign an essential Iraqi cultural trait that emphasizes authority over individual responsibility.

&#8220;Initiating their own ideas and their own way of thinking is a difficult task for these soldiers,&#8221; Wisam, the Iraqi instructor, said in an interview. &#8220;The rules of the previous army were just to follow orders. Here they are learning to coordinate between officers and soldiers.&#8221;

He also pointed to one item on his curriculum titled: &#8220;The role of the military in a democratic society.&#8221;

&#8220;Members of the previous army conducted mass graves in Kuwait, theft and crimes against the Iraqi civilians. We now encourage them to get away from any criminal activity associated with warfare.&#8221;

Widespread illiteracy among Iraqi soldiers makes formal training a challenge. More than 20 soldiers started out in the monthlong class, but five were dismissed on the first day and two others on the second day after the instructor realized they could not read or write.

One Iraqi soldier who has adopted the role of an American-style NCO is Sgt. Maj. Neama Abdallah, who heads the personal security detail for the Iraqi Brigade commander, Col. Mahdi.

&#8220;Now we give the soldiers a brief about where we are going and what we will do today. We make sure we know what soldiers are coming out with us. We talk about what we are going to do if we hit [a bomb],&#8221; he said.

The class itself may illustrate the strength of the American-style NCO system. Seimet, a 26-year-old Michigan native, said his own sergeant major simply told him to develop and organize a &#8220;primary leadership development course&#8221; similar to those he and others attend as they move up in rank.

During the past several weeks, he identified an instructor and scheduled the class in an Iraqi army conference room where the electricity works for more than 12 hours a day.

He drew up an hour-by-hour curriculum, gave each student a three-ring binder with Arabic-language course materials and provided a Power Point presentation for the instructor.