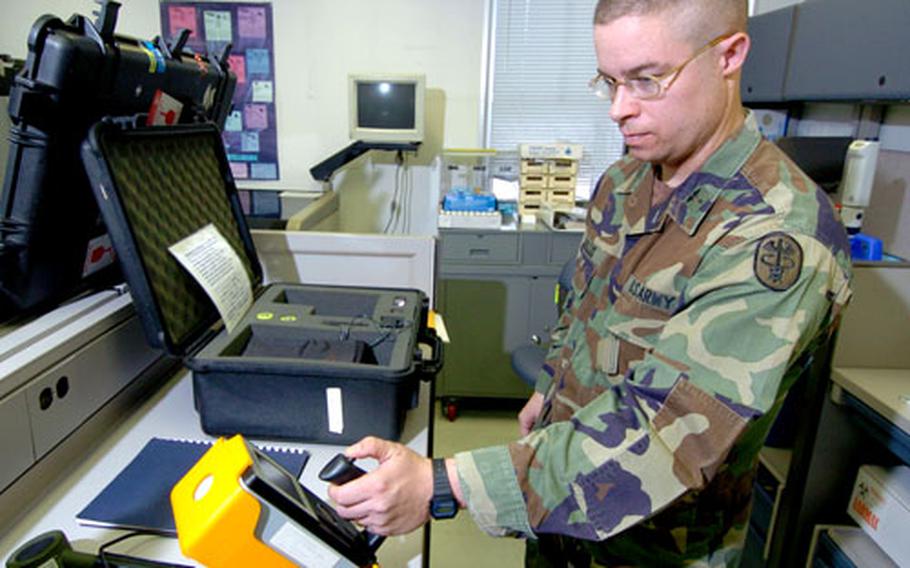 CAMP ZAMA, Japan &#8212; In the hypothetical scenarios presented during the &#8220;Medical Effects of Ionizing Radiation&#8221; course last week, servicemembers faced a dirty bomb attack in a subway, a soldier with radiation sickness and a radioactive bomb attack on a school.

In real life, radiation could come from an attack or simply an accident in a shipyard or factory.

&#8220;The fact is, in today&#8217;s situation, anybody could be in the front line,&#8221; said Capt. Aaron Miaullis, a health physicist and the Chemical Biological Radiological Nuclear and Explosive (CBRNE) chief from the Army Center for Health Promotion and Preventative Medicine &#8212; Pacific, based at Camp Zama.

Miaullis arranged for the MEIR class to come to Camp Zama, taught by three instructors from the Armed Forces Radiobiology Research Institute in Bethesda, Md.

Introducing servicemembers to the topic can help take some of the fear out of it. The class is designed for servicemembers and civilians, medical professionals and emergency planners, or anyone who might come in contact with radiological material in the course of their work.

For 2&#189; days, about 45 people learned what radiation is and how it affects the body in the short and long term, how to protect themselves, how to treat patients and how to manage an incident location.

The instructors held a similar workshop the week before at Yongsan Garrison in South Korea.

&#8220;We want to give the folks an idea, if there was some sort of incident, what might they experience and who can they call on to help them,&#8221; said Lt. Cmdr. Charles &#8220;Bob&#8221; Woodruff, an instructor and operational health physicist at AFRRI.

They were introduced to reference resources and agencies such as AFRRI whom they could call in an emergency. &#8220;We give them a lot of reference material,&#8221; Woodruff said.

Most installations now have a CBRNE team. But many people are still unfamiliar with radiation.

When the MEIR course was created years ago, it was called Medical Effects of Nuclear Weapons Course.

Since the Cold War has thawed, the course has evolved into a new program, and one instructors say is more useful.

&#8220;Even though the threat was greater during the Cold War, I actually think the class is more pertinent now,&#8221; said instructor Army Maj. Stephanie Vaughn, senior nuclear engineer at AFRRI. &#8220;The probability of an accidental or deliberate terrorist event has greatly increased. The ability for first responders to actually make a difference is greater.&#8221;

Training for such a scenario is one of the responsibilities of CHPPM-Pac, and falls on Miaullis&#8217; shoulders. After taking an expanded MEIR course in the United States, he arranged to bring the class to South Korea and Japan.

&#8220;I absolutely was thrilled with the course,&#8221; he said. The training, he added, helps on many levels. It allows participants to network, so they can call on others who took the course with them for help in an emergency. &#8220;That&#8217;s the advantage of having a class like this as opposed to a PowerPoint presentation,&#8221; he said. &#8220;It sticks with them better. It&#8217;s that interaction and the instructors that really bring it home.&#8221;