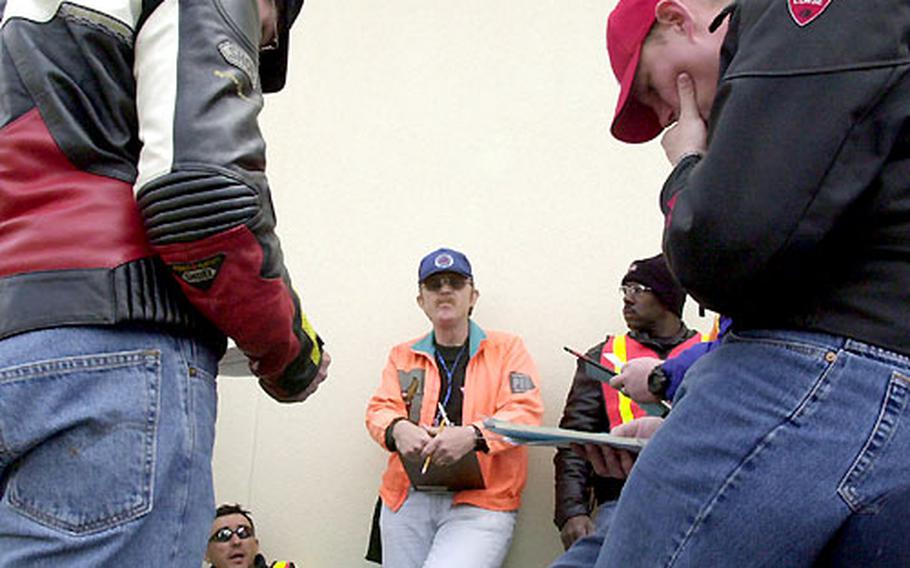 ATSUGI NAVAL AIR FACILITY, Japan &#8212; Wendel Dunn slammed his motorcycle into the side of a car in late January, his head smashing through and shattering the driver&#8217;s-side window.

Printed on the T-shirt he wore under his jacket was the Motorcycle Safety Foundation (MSF) logo. The foundation is a nonprofit organization from California that promotes motorcycle safety.

Without the proper training, he said, he may have tried to out-speed the car, which ran a red light, instead of braking.

Instead, he walked away from the Jan. 24 collision with a separated shoulder, a bruised knee and a brand new bike. The new bike was courtesy of the driver, who was found 100 percent at fault.

Dunn uses this example to stress that no rider is too experienced for a motorcycle-safety class.

Nine instructors from the Kanto Plain completed the new course&#8217;s training here this week. After nine days of instruction, they&#8217;ll qualify to teach both MSF&#8217;s beginner course and the new experienced rider classes.

Call, 34, rode dirt bikes when he was 5 years old. His bike of choice today is the Ducati, considered by some to be one of the world&#8217;s most prestigious and high-performance racing motorcycles.

Five days into the rider-coach training, taught by Dunn and the Naval Safety Center&#8217;s William Cosby, Call said he&#8217;s already learned a thing or two, such as how to make a double U-turn.

The Department of Defense is required to make motorcycle training available to military personnel worldwide, said Cosby, traffic safety specialist for the Navy&#8217;s Motorcycle Safety Program. MSF provides its curriculum free to DOD; the only cost is material reproduction.

In order to operate a motorcycle on military bases overseas, DOD personnel must complete one of the MSF training programs.

Safety experts hope the new training program will help reverse a disturbing trend: motorcycle crashes &#8212; including the military &#8212; have been on the rise, especially in the last two years, Cosby said.

There have been 11 fatalities on two-wheel vehicles between the Navy and Marine Corps this fiscal year &#8212; the same recorded in fiscal 2001 and four shy of last year&#8217;s total, according to NSC statistics. And in the Air Force, there were 19 motorcycle deaths in 2002, a 200 percent increase from the previous year, according to Air Combat Command public affairs.

One theory that may explain the increase in crashes is more inexperienced riders on the road, Cosby said.

Besides saving lives, the Defense Department has a corollary interest in stopping the trend: &#8220;The bottom line is when people get hurt, it takes them away from mission readiness,&#8221; Cosby said.