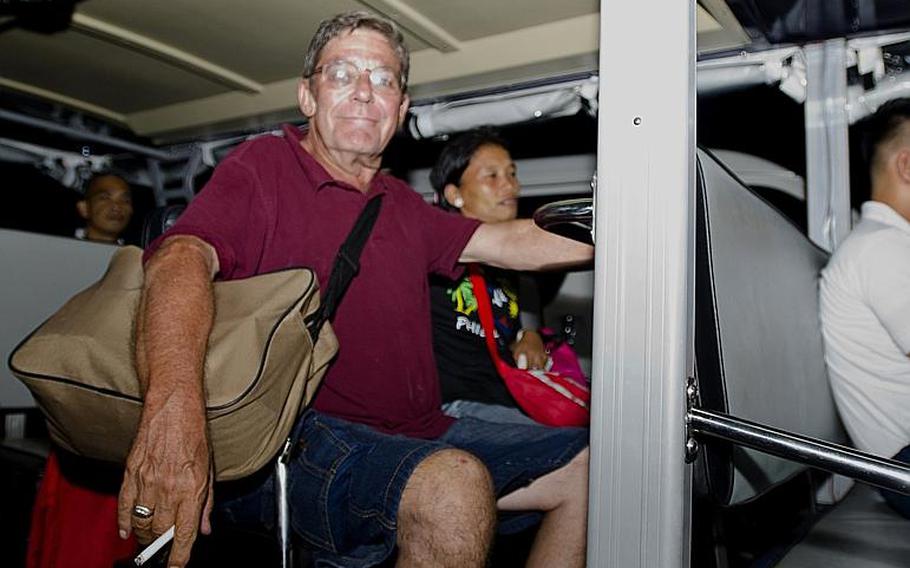 Buy Photo
Mike Asell and his wife, Lyn, arrived in Manila, the Philippines, on Nov. 13, 2013, five days after their home island was devastated by Typhoon Haiyan. The Asells hope to return to Tacloban soon, but worry what will be left when they get there. (Eric Guzman/Stars and Stripes)

The Filipina typhoon evacuee was a bundle of nerves as she and her husband — retired Nebraska computer engineer Mike Asell, 65 — dragged a battered suitcase from the flight line.

Their home in Tacloban survived the Friday storm that packed winds as strong as 170 mph and destroyed much of the city around it.

It’s the aftermath worries them.

“My family is still there, and I don’t know what’s happened to them,” Lyn Asell said. “The last communication I had was from my cousin, who said he needed food.”

The Philippine air force has been sending three C-130s back and forth from Cebu to Tacloban from dawn to dusk, and had by Tuesday delivered 400,000 pounds of relief supplies, Lt. Col. Marciano Jesus Guevara told The Associated Press.

Guevara said the C-130s have transported nearly 3,000 civilians out of the disaster zone, and that the biggest problem in Tacloban is a lack of clean drinking water.

“Water is life,” he said. “If you have water with no food, you’ll survive.”

The city’s grocery stores are closed, looted or destroyed. “Even if you have money, you can’t buy anything,” Lyn Asell said.

Mike Asell said the typhoon sounded “like standing under a freight train” when it hit Tacloban.

But that what has followed is just as disturbing.

“Massive areas were completely flattened with big piles of trash,” he said. “I could see dead bodies lying in it. And there are gangs, looting and violence.”

The Philippines’ military and police are the only thing standing between looters and the last surviving food warehouse in the city, he said.

His mother and brother-in-law walked 16 miles to reach the couple’s home but, with electricity, phone lines and cell service cut there’s no way of knowing what has befallen other relatives. To make matters worse there have been reports of killings in his wife’s family’s village in the wake of the disaster, he said.

The couple stayed in Tacloban for a few days to see if things would settle down but decided to leave on one of the evacuation flights Wednesday. American citizens have priority for space on the flights out, Mike Asell said.

The couple plan to stay with relatives in Manila, with hopes to return to Tacloban soon. But, they said they realize it may be a while before things return to normal there.

Marine Capt. Dane Gaynor, 32, of Atwood, Colo., an intelligence officer who has been flying over the disaster zone in a P-3 Orion surveillance plane scouting for potential landing zones and convoy routes, said most of the buildings he’d seen were destroyed beyond repair or flattened.

“In some areas it just looked like a pile of matchsticks,” he said.

Gaynor said some survivors below signaled to the aircraft for help with mirrors.

“Seeing that and knowing there was nothing you could really do at that point was tough,” he said.