Couple gets a lot out of volunteering 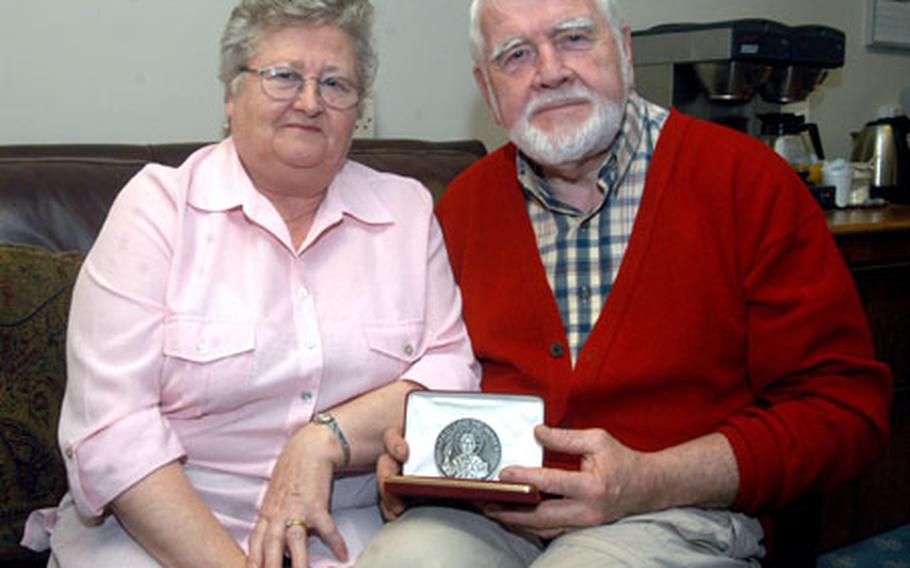 Margaret and Brendan Fulham display their honorary religious medallion given to them by the U.S. Military Catholic Archdiocese for 28 years of volunteer work at the RAF Lakenheath chapel. (Sean Kimmons / S&S)

RAF LAKENHEATH &#8212; It all started with a scheduling conflict between their children&#8217;s soccer games and Catholic Mass at a local church on Sundays.

So, Brendan and Margaret Fulham decided to attend the Saturday service at the RAF Lakenheath chapel. For the next 28 years, they would end up volunteering much of their time in support of the chapel. As a result, the U.S. Military Catholic Archdiocese bestowed an honorary religious medallion, one of two given each year, to the British couple earlier this month.

The couple has performed a variety of tasks for the chapel&#8217;s Catholic parish over the years, including ushering, teaching religious education, running a singles group and welcoming new members. They also spend a lot of time at the Gatehouse, a charitable organization in Bury St. Edmunds that collects donated food, furniture and clothing.

The Fulhams&#8217; countless hours at the chapel have spurred many long-lasting friendships and even invitations to an upcoming wedding and a retirement party in the States.

Brendan Fulham finds that his donated time to the chapel is a way to reciprocate what he received from American servicemembers as a child.

His mother, who once worked at the base, was single with three children when she received clothing, chewing gum, candy bars and popcorn from the Americans for her kids.

In the near future, the couple will become coordinators of the parish, which sees an estimated 400 worshippers during weekend services, said 48th Fighter Wing Chaplain (Lt. Col.) Stephen Blair.

Even though they&#8217;ll be getting paid for their new positions, the Fulhams said they won&#8217;t stop volunteering.