Couple finds Okinawa Marathon a perfect way to be together 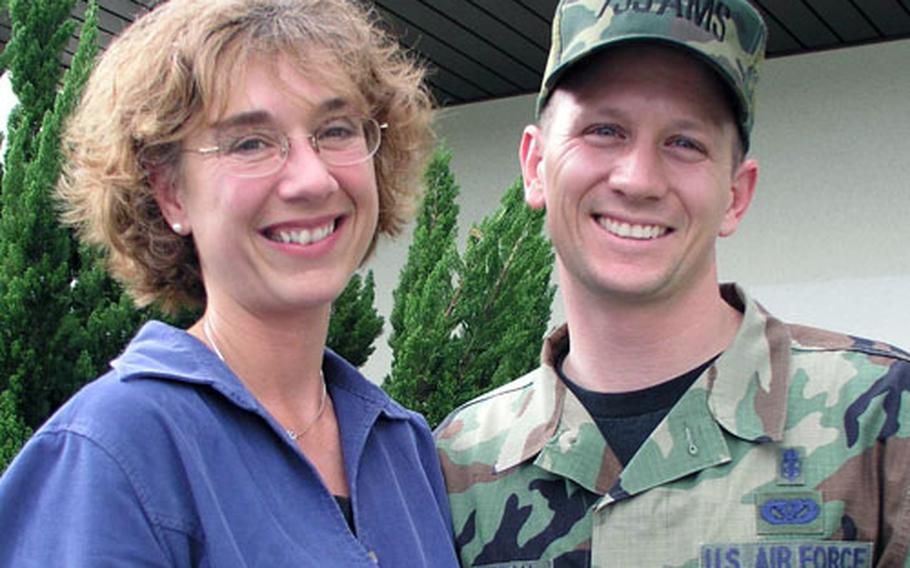 Rhonda Dallas, social worker for Family Advocacy of the 18th Medical Operation Squadron, and her husband, 1st Sgt. Mike Robicheau of the Air Mobility Squadron at Kadena Air Base, will be among more than 10,000 athletes competing in Sunday’s Okinawa Marathon. (Chiyomi Sumida / S&S)

KADENA AIR BASE, Okinawa &#8212; What will a two-career couple do for more time together?

How about spending a Sunday amid a cast of thousands running a marathon?

That&#8217;s what Air Force 1st Sgt. Mike Robicheau and his wife, Rhonda Dallas, did in 2005. He said they enjoyed it so much they&#8217;ll do it again this Sunday, when this year&#8217;s Okinawa Marathon jogs off at 9 a.m. from Comprehensive Park in Okinawa City.

They decided to prepare for the 2005 marathon by training together five days a week, said Robicheau, of the 733rd Air Mobility Squadron.

The effort has other benefits, said his wife, a social worker for Family Advocacy at the 18th Medical Operation Squadron: &#8220;We both have a strong commitment to stay fit and healthy to represent healthy Americans.&#8221;

Eventually they formed a running group, the Pacesetters, with 12 other members, some from his unit. They meet regularly to train and share running and diet tips.

The couple will be among an estimated 500 Americans running Sunday. Still, finding them may be about as easy as spotting the star of &#8220;Where&#8217;s Waldo&#8221;: Some 10,000 runners already have signed up &#8212; mostly from Okinawa, but also from mainland Japan, South Korea, Germany, Australia and New Zealand, organizers said.

The course winds through six local communities, but &#8220;running through Kadena Air Base is one of the biggest attractions,&#8221; said organizer Tohru Nakasone.

&#8220;It is a different world,&#8221; he said. &#8220;Many Japanese runners look forward to passing through the base because they like the way American people cheer and encourage the runners.&#8221;

Kadena officials said they expect about 300 volunteers to give water and fruit to runners and cheer them on.

&#8220;By running through different local communities &#8230; including Kadena Air Base, we hope that the event helps to unite the heart of all the people who take part, both runners and volunteers,&#8221; he said.

Because of the marathon, some base lodging near the Shogun Inn will be inaccessible to vehicles from 8:30 a.m. to 2:30 p.m. on Sunday.

The 18th Services Library will remain open for normal hours, but parking will be inaccessible, according to an 18th Services news release.