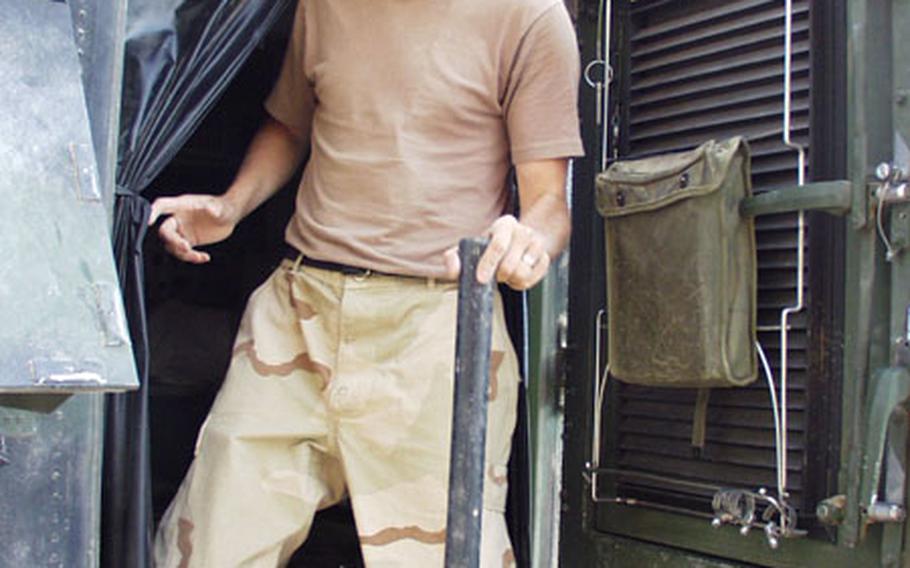 Army Sgt. David Zarate, of the 440th Signal Battalion from Darmstadt, Germany, has been deployed to Kuwait City and then Iraq since mid-March. His wife, Michelle Zarate, is in the 32nd Signal Battalion, also out of Darmstadt, and she is also deployed to Kuwait and is now in Iraq. They have been able to see each other frequently and speak as often as twice a day via telephone. (David Josar / S&S)

But the 27-year-old Zarate&#8217;s situation is different than most. His wife, Sgt. Michelle Zarate, 24, is also deployed somewhere in Iraq.

Although the Zarates are in different battalions of the 22nd Signal Brigade out of Darmstadt, Germany, their paths cross often enough that it makes the separation a little less stressful.

For the past week, he has been at Victory Camp, establishing communications for various units at the former palace complex of Saddam Hussein, now a U.S. military headquarters. A month ago, the Zarates were both at Camp Virginia in Kuwait.

They were busy preparing to move into Iraq, but they did have time to spend together during the three weeks they shared at the camp.

If they know where the other will be, they can find them on the communications network and make a call. Zarate said they usually talk once a day, sometimes more.

But being so close does have its drawbacks. Zarate said sometimes he thinks the separation and being away from home would be easier to handle if he just knew he wouldn&#8217;t see his wife for six months, instead of knowing they&#8217;ll bump into each other occasionally.

Zarate said his wife left first and he helped her pack and wrap up loose ends. A few days after she left, he got the word he would leave.

The Zarates met about four years ago while both were taking some additional military training. After they were married more than three years ago, the military spouses program ensured they would be assigned to nearby duty stations.