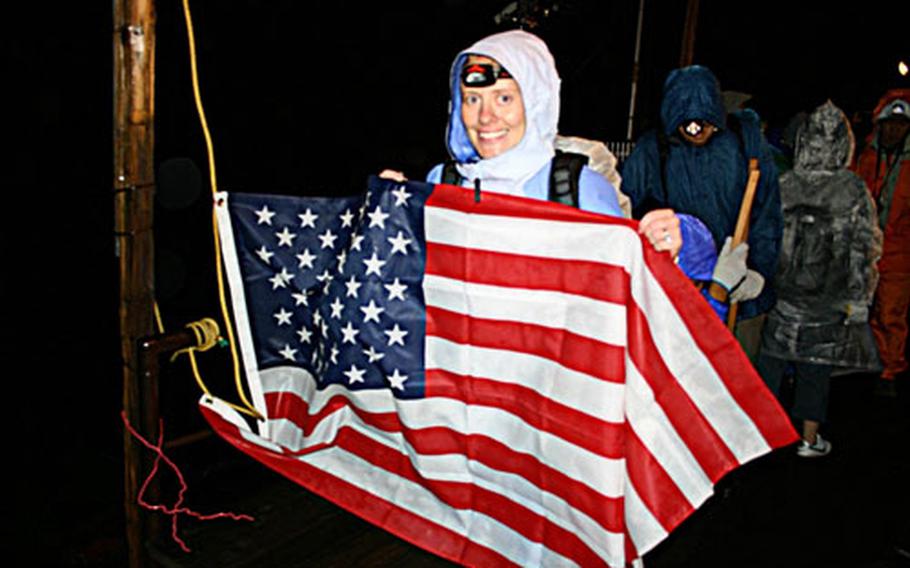 When the senior U.S. military representative in Japan reached Station 8 &#8212; about halfway up the Japanese landmark &#8212; he found a troubling sight: The U.S. flag displayed there was a bit battered from years of exposure to the harsh elements.

Wright put the call out for someone to find and replace Old Glory &#8212; preferably before climbing season ended.

The couple already had planned to make their second trek up Mount Fuji that night, but the commander&#8217;s request added some spice to one of Japan&#8217;s most popular outdoor quests.

&#8220;We knew the general really wanted the flag changed so we figured since we were climbing it anyway we could take care of it,&#8221; said Beth Welliver, with the 20th Operational Weather Squadron. Her husband is with the 374th Communications Squadron.

Starting from Station 5 about 10:30 p.m., the pair began the arduous, five-hour ascent &#8212; on a persistent lookout for the worn red, white and blue.

The weather hardly cooperated, she recalled.

Between the wind and rain, a few snowflakes appeared, but no flags flew at the stations along the trail.

Eventually, the couple decided to stop for a snack.

&#8220;Sitting there eating, huddled up against the side of the hut, I happened to look over and saw the burlap sack,&#8221; she said.

In inclement weather, she explained, flags are brought down and bagged for protection. The old U.S. banner was attached to a railing at the bottom of a flagpole.

The couple quickly made the switch.

The Wellivers brought the flag back to Yokota and contacted Lt. Col. John Bird, the 5th Air Force&#8217;s executive officer.

In his statement, Wright said he appreciated the Welliver&#8217;s effort to plant a new flag.