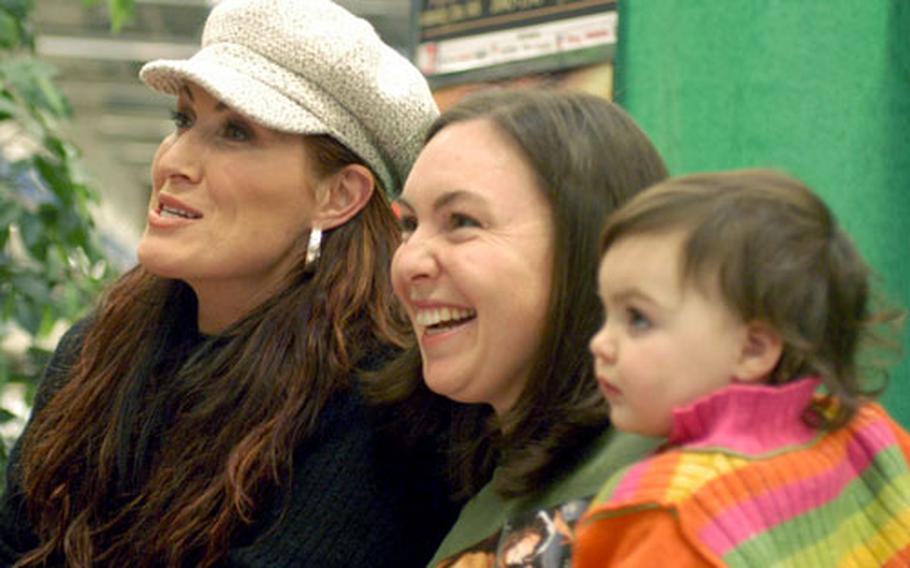 AVIANO AIR BASE, Italy &#8211; What is it about country music stars and U.S. servicemembers?

While it seems as though there&#8217;s someone with ties to Nashville entertaining troops somewhere around the world at virtually any time, one of them, Jo Dee Messina, doesn&#8217;t have an answer.

Messina, who has sold more than 5 million records since hitting the charts in 1996, doesn&#8217;t exactly fit the typical country demographics.

She&#8217;s from Massachusetts &#8212; which shoots down the theory that country stars are supporting fellow Southerners, who make up a large chunk of today&#8217;s military.

Her father and uncle both made careers out of their military service.

Her mother worked for the government and her brother is employed with the Veterans Administration.

Tour manager Jim Mayo was stationed in Vicenza in the early 1970s and flew out of Aviano several times for jumps.

Messina said she wasn&#8217;t a military brat growing up, but she is familiar with U.S. bases.

At least those in the States.

She approached the USO about a tour overseas after participating in the organization&#8217;s 65th anniversary concert in September.

After her Saturday concert in Aviano, she&#8217;s to perform Monday night in Vicenza and Wednesday night in Naples.

Messina said she&#8217;d like to perform for other troops in other locations. She looked into a trip into Iraq this time around.

Messina has been in Italy for about a week, visiting with relatives in Trento.

But it is the Naples show that will put her closest to her family&#8217;s roots: They hail from Sicily.

Fans lined up in front of the Aviano Army and Air Force Exchange Service store hours before her scheduled autograph session.

They spent more than two hours reading magazines, playing on Game Boys and braiding beads into their hair.

Asked if she was a fan, Allison shook her head sideways.

Jennifer Fisher said she&#8217;s been following Messina&#8217;s career for about a decade and saw her perform in Phoenix in the 1990s.

She describes herself as a fan of several types of music, but says she&#8217;s noticed that acts that come overseas tend to be country performers.

Messina said fans of any genre should enjoy her shows.