Country and conflict: Among documentary's musical threads is story of Americans at war 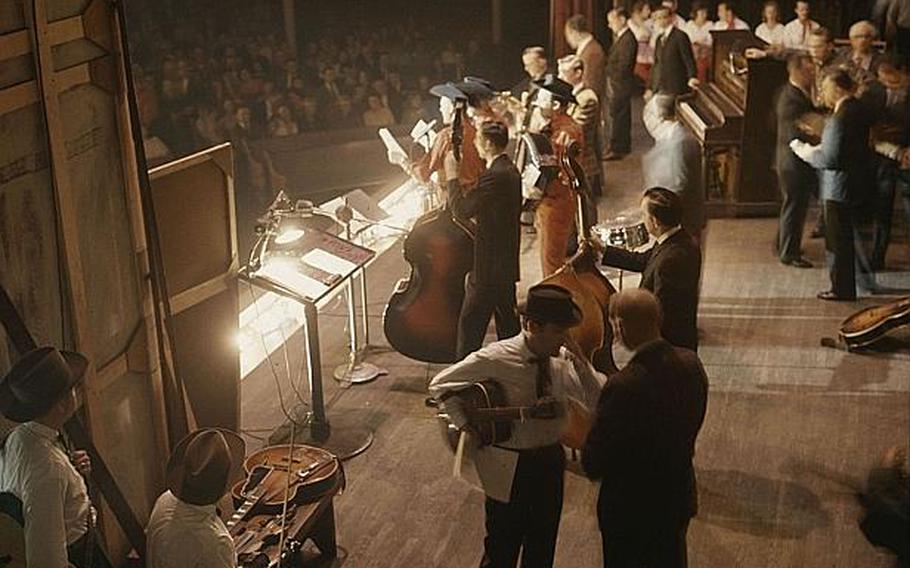 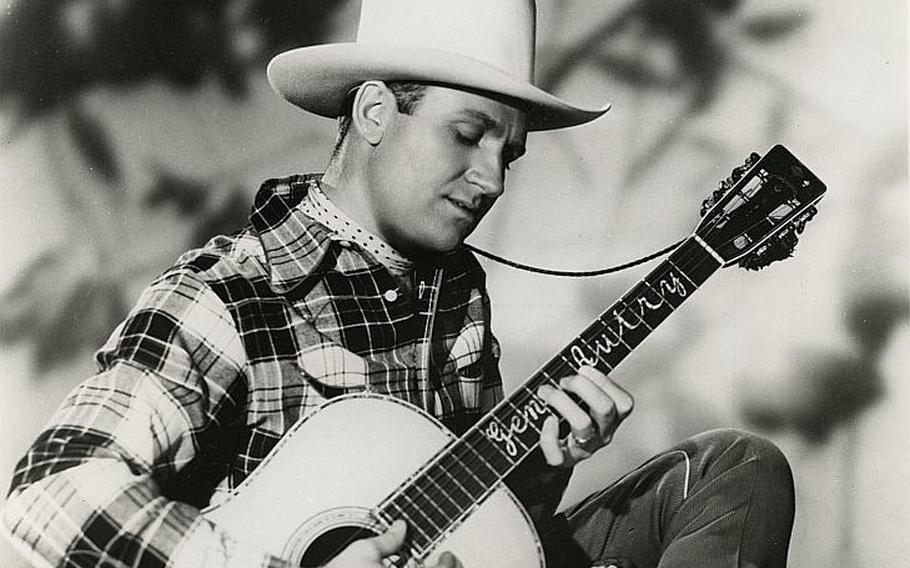 Gene Autry, nicknamed The Singing Cowboy, enlisted in the Army Air Corps during a live broadcast of his Western variety show "Melody Ranch" in 1942 and went on to pilot a C-109 cargo plane on a dangerous operation over the Himalayas. He later shared wartime experiences through his music, including the song "At Mail Call Today," describing a young soldier learning that the girl he loved back home had left him. (Country Music Hall of Fame and Museum) 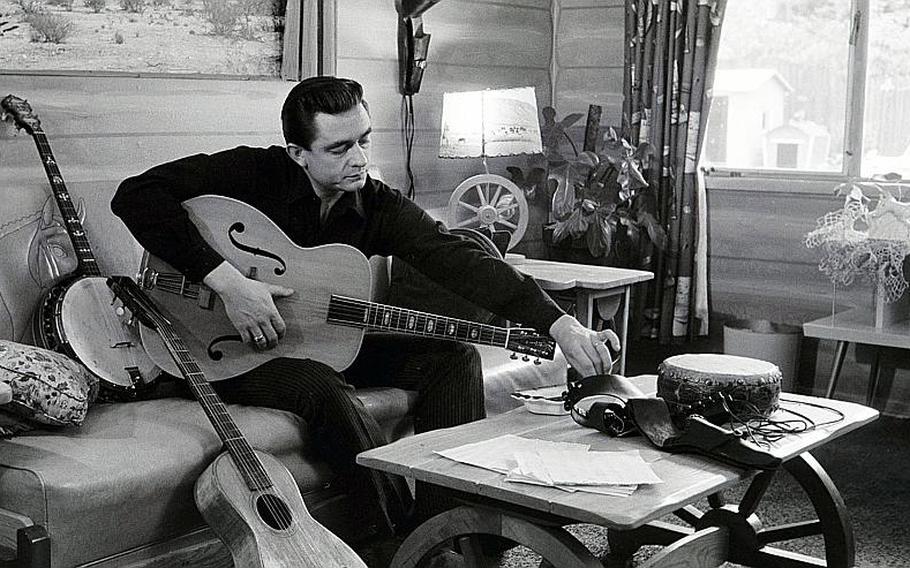 Johnny Cash at his home in California in 1960. Cash spent four years in the Air Force before being honorably discharged as a staff sergeant. Eventually, Cash would give Kris Kristofferson, another veteran turned country musician, his big break by recording one of Kristofferson's songs. (Sony Music Archives) 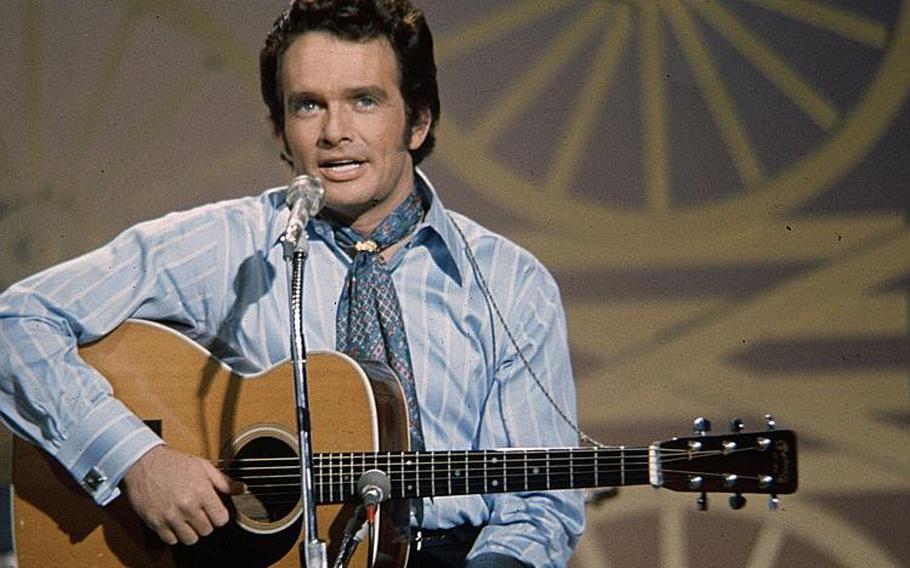 Merle Haggard appears on "The Johnny Cash Show" in 1970. Haggard's "Okie from Muskogee" inadvertently became the rallying cry for those who supported the Vietnam War. (Les Leverett) 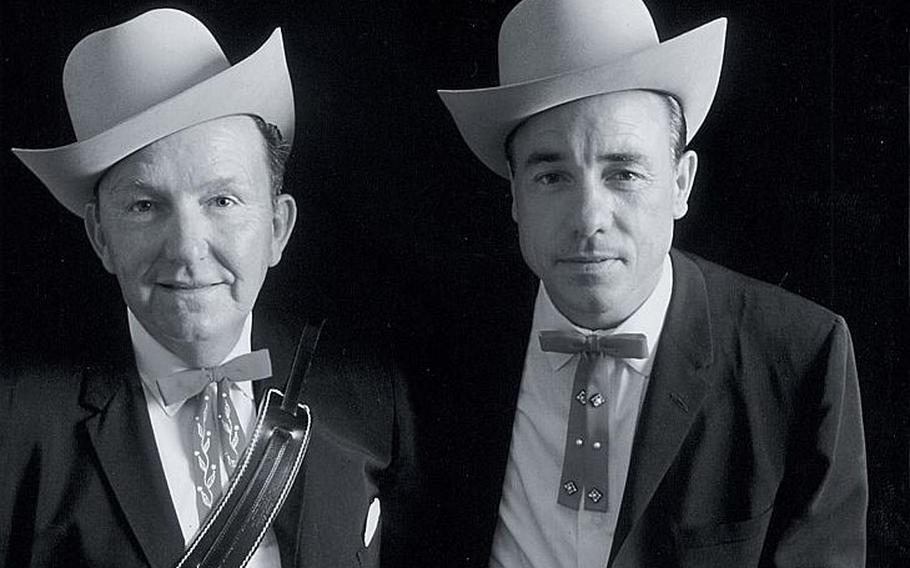 After Lester Flatt, left, and Earl Scruggs, right, broke up the Foggy Mountain Boys, Scruggs performed for hundreds of thousands of anti-war protesters in Washington on Nov. 15, 1969. He was one of the only country artists in attendance. (Marty Stuart Archives)

Country music has attempted through its songs to reflect the happenings of its time, relaying the sense of duty felt during World War II, the national divisions caused by the Vietnam War and the renewed patriotism following the 9/11 terrorist attacks.

In “Country Music,” the newest documentary series from filmmaker Ken Burns, the story of the genre also is one of America at war.

“Each generation of country music singers have always tried to reflect their times,” Burns said during a recent interview with Stars and Stripes. “Not just these internal emotions, but what’s going on. That prompts Elton Britt, Gene Autry and Patsy Montana during World War II, and another time it prompts Jan Howard and Merle Haggard, and another time Alan Jackson.”

“Country Music” is 16 hours long, spread across eight episodes, premiering Saturday, Sept. 21, on AFN-Spectrum. The series includes interviews with more than 80 country music artists who explain how the genre evolved from the early 1930s to the mid-1990s.

The second episode puts focus on World War II, and how the conflict spread country music across the nation. In the sixth, musicians and historian Bill Malone look back at America during the Vietnam War era — a point in time that led to the genre’s increased politicization.

‘Soundtrack to World War II’ During the Great Depression, and later World War II, country music grew in popularity. It expressed the experiences of America’s working people and a sense of loss — themes relatable to the time.

Its tendency to spotlight real emotions and delve into love and loss is part of the reason Burns chose country music as a focus for his documentary, he said.

“From my very first film that I started working on 42 years ago, I’ve been interested in an emotional archaeology — not excavating dry data and facts and events from the past, and not succumbing to the superficial syrupy nostalgia and sentimentality,” Burns said. “And I don’t think I know of any other film I’ve worked on that prompts those emotions like country music.”

As the first peacetime draft was instituted in the U.S. in 1940, country artists turned their attention — and their music — toward World War II.

The Carter Family, an American folk group, released “Why Do You Cry, Little Darling?” about a girl whose sweetheart had been drafted into the Army. Patsy Montana recorded “I’ll Be Waiting for You, Darlin,’ ” which had a similar theme.

Elton Britt sang “There’s a Star-Spangled Banner Waving Somewhere,” a patriotic anthem about a disabled man struggling to find a way to serve his country. In “Smoke on the Water,” Bob Wills promised revenge against America’s enemies.

Gene Autry, nicknamed The Singing Cowboy, enlisted in the Army Air Corps during a live broadcast of his Western variety show “Melody Ranch” in 1942 and went on to pilot a C-109 cargo plane on a dangerous operation over the Himalayas. He later shared wartime experiences through his music, including the song “At Mail Call Today,” describing a young soldier learning that the girl he loved back home had left him.

Many members of the military from the northern and western U.S. were introduced to country music during their World War II service.

“I think a large number of people who serve in our military come from rural and southern areas — the places where country music was first born and nurtured,” Burns said. “So, they bring their culture . . . and what you have is the ultimate melting pot.”

If it hadn’t reached them already, country music was brought home by those who had served.

Country artists respond to the Vietnam War Similar to World War II, the soldiers serving in the Vietnam War disproportionately came from country music’s core audience of working-class families, according to Burns’ documentary. At one point during the war, it was reported that 65% of all records sold at military bases were from the country music genre.

Following the breakup of the Foggy Mountain Boys, one of its members, Earl Scruggs, performed for hundreds of thousands of anti-war protesters in Washington, D.C., on Nov. 15, 1969 — one of the only country music artists in attendance.

Around the same time, Merle Haggard released “Okie from Muskogee,” which inadvertently became the rallying cry for those who supported the war in Vietnam. Malone said the song was viewed by many as upholding small-town life and those Americans who paid their taxes and defended their government.

When President Richard Nixon invited legendary musician Johnny Cash to perform at the White House in 1972, he chose to sing “What is Truth?” — a song that hailed the idea of youth and freedom. In “Country Music,” Cash’s choice was described as a “full-throated defense” of those who questioned authority and spoke out about injustice.

Two of Howard’s three sons enlisted in the Armed Forces during the Vietnam War. In “My Son,” she recounted her favorite memories with her oldest son, James, when he was a child. Soon after, James was killed when his armored personnel carrier hit a landmine. Her middle son returned from Vietnam, but the youngest, David, was traumatized by his brother’s death and later killed himself.

“So, the Vietnam War took two,” Howard said during episode six of the documentary. “It was a horrible war.”

Soon after James’ death, an anti-war protester went to Howard’s home and asked her to join a demonstration in Memphis. Howard declined.

“I said, ‘One of the reasons he died was so you’d have the right in this country, so go ahead and demonstrate. Have at it,’ ” Howard recounted. “I said, ‘No, I won’t be joining you. But I tell you what, if you ever ring my doorbell again, I will blow your damn head off with a .367 Magnum.”

At the end of episode six — which focused largely on division in the United States — the filmmakers turned to the Nitty Gritty Dirt Band’s recording of “Will the Circle Be Unbroken?” which exemplified music’s power as a unifier.

The Nitty Gritty Dirt Band, described in the documentary as a long-haired hippie group, went to Nashville and recruited famous bluegrass and country artists, including Roy Acuff, Maybelle Carter and Earl Scruggs, to collaborate on the album. The most collaborators joined in on “Will the Circle Be Unbroken?” which was chosen as the album’s name. The song is a Christian hymn, written in 1907.

“I think that’s an important point — the music comes to the rescue and expresses these things that connect us and not what divides us,” Burns said.