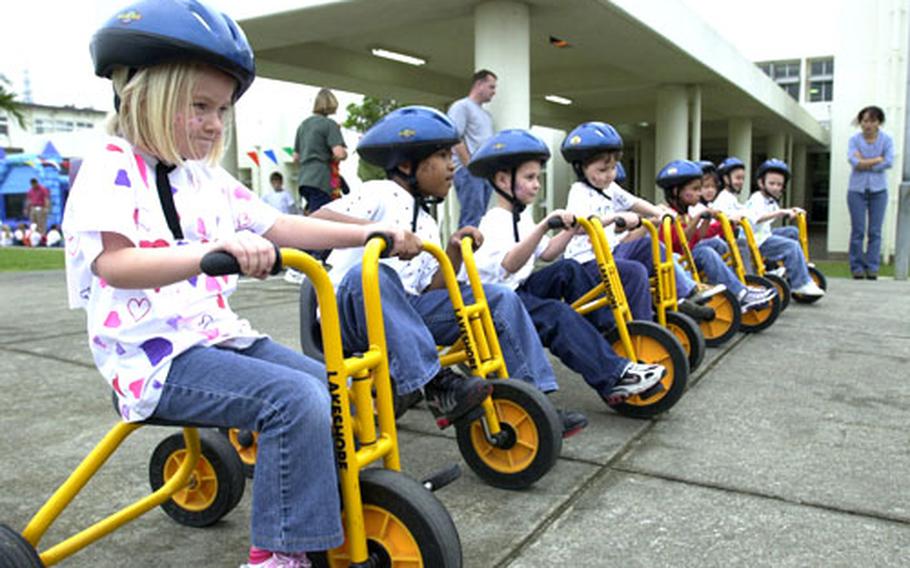 Kindergarten students at Bob Hope Primary School on Kadena Air Base line up and prepare to race 100 feet as they celebrated the 100th day of school Friday. (Fred Zimmerman / S&S)

Kindergarten students at Bob Hope Primary School on Kadena Air Base line up and prepare to race 100 feet as they celebrated the 100th day of school Friday. (Fred Zimmerman / S&S) 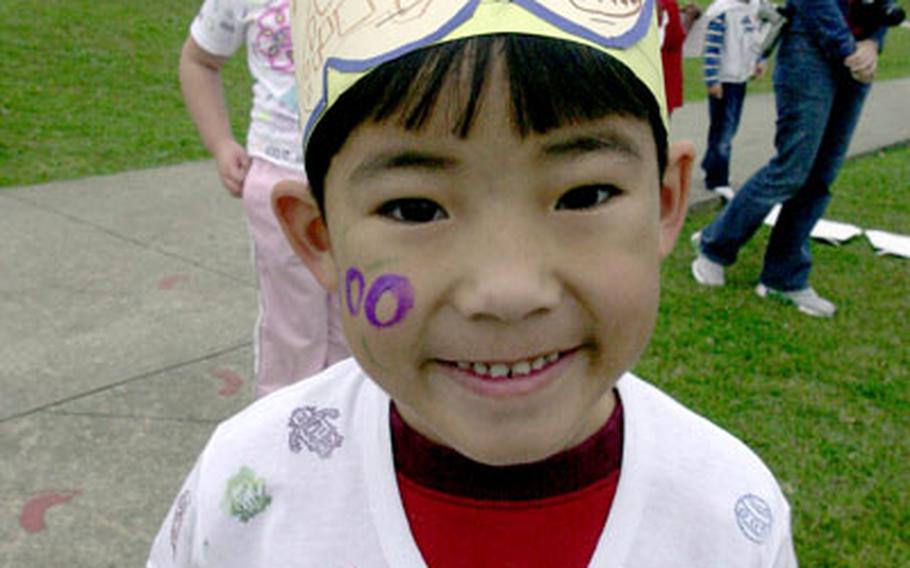 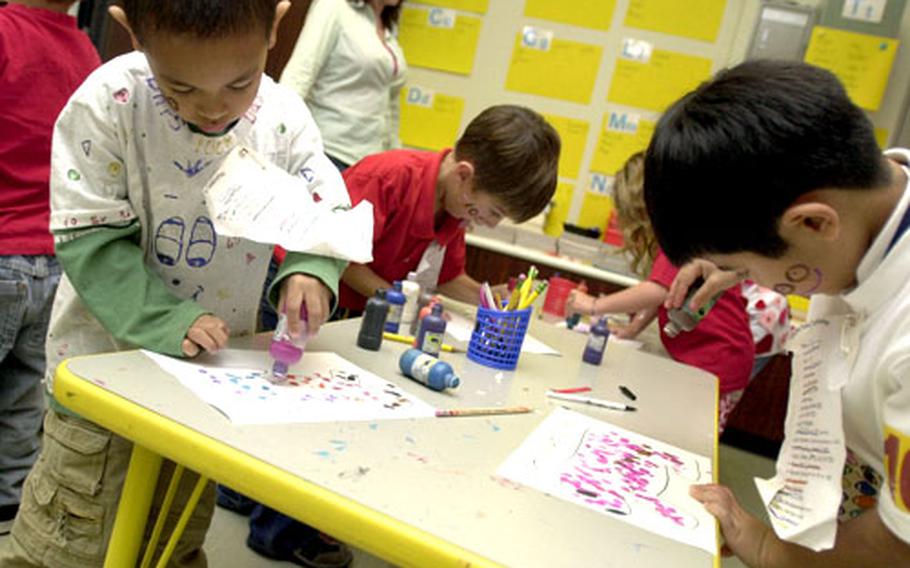 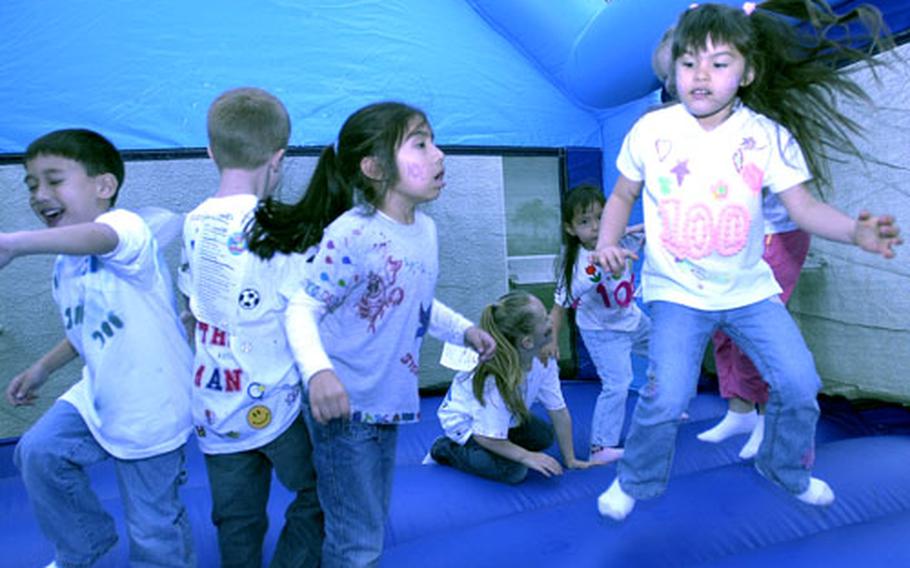 Students jump in a bouncer and counted to 100 by fives — a favorite activity of many of the children. (Fred Zimmerman / S&S) 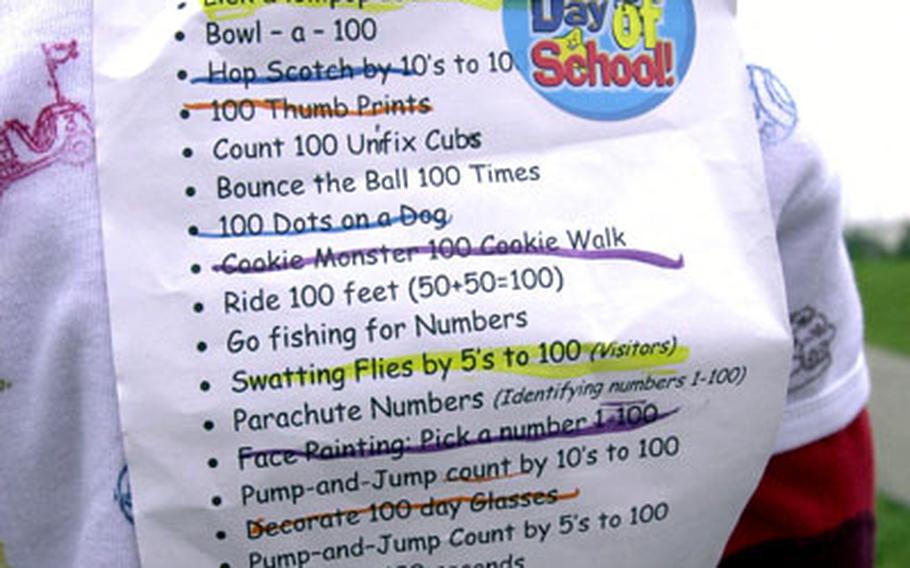 Students wore a list of 100-related activities that were individually crossed off as their class completed them. (Fred Zimmerman / S&S)

KADENA AIR BASE, Okinawa &#8212; Kindergarten pupils at Bob Hope Primary School here celebrated the 100th day of school Friday by having a lot of fun and learning about the number 100 at the same time.

This is the seventh year the eight kindergarten classes at the school have held a &#8220;100 Day,&#8221; which consists of games and activities that have the students counting to the big number, according to kindergarten teacher Renae Parker.

And it&#8217;s not just kids having all the fun. Parker said the whole school gets involved and many parents come out for the event, as do active-duty members who volunteer at the school. An off-base kindergarten class of 16 also attended this year&#8217;s activities.

Some of the activities during the three-hour festivities included: air bouncing to 100, counting by fives and 10s; running 100 yards; riding a tricycle 100 feet; swatting &#8220;flies&#8221; &#8212; paper flies with numbers on them &#8212; by fives to 100; and licking a lollipop 100 times &#8212; a favorite. Pupils even had homework before the event, which involved making a 100-day T-shirt. Pupils wrote a list of events on sheets of paper pinned to their shirt that were crossed off as they completed them.

Parker said the teachers simply take their math curriculum and turn it into fun activities. She also said it&#8217;s a fun way to show off to parents.