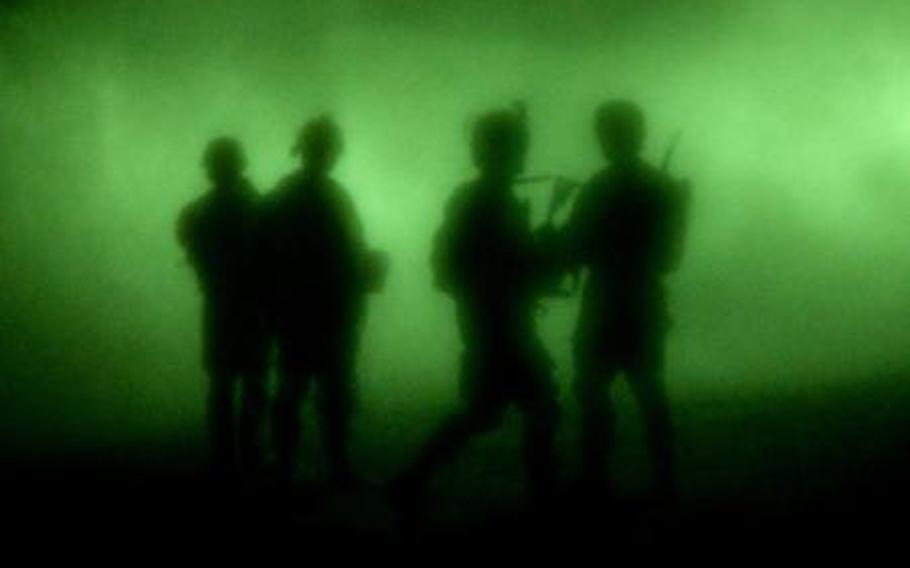 Soldiers from Company H, 3rd Squadron, 2nd Striker Cavalry Regiment, prepare to raid a series of compounds in the Maywand District of Afghanistan, on Nov. 22, 2010. (Edward Garibay/Courtesy of the U.S. Army)

HEIDELBERG, Germany &mdash; A Rand study of 30 insurgencies worldwide between 1978 and 2008 concluded that there are 15 good practices and 12 bad practices in all counterinsurgencies, and if you want to win, you have to do more good than bad.

As a follow up, Rand recently scored the Afghanistan War with the help of experts from the U.S. military, academia, think tanks and the news media.

NATO&rsquo;s campaign in Afghanistan scored lower in the study than any of the eight of 30 cases counted as government wins. But it also scored higher than any of the cases where the government lost. That puts it into unknown territory and makes it unclear which outcome is more likely.

The study, &ldquo;Counterinsurgency Scorecard: Afghanistan in Early 2011 Relative to the Insurgencies of the past 30 years,&rdquo; found that the war in Afghanistan has eight of 15 factors &mdash; &ldquo;good&rdquo; things &mdash; needed to be victorious in COIN. That tied for lowest with Croatia in its rout of Serb forces in the early 1990s, among the 30 cases counted as a government win.

It scored 4.5 out of 12 possible bad things that history showed did not work, according to the study. Only one government listed as a winner &mdash; Turkey in 1999 in its fight against the Kurdish rebel group, PKK &mdash; had that many bad factors.

The end score was the number of good things minus the number of bad things. By comparison, Sierra Leone and Senegal scored 13s, the highest-scoring government wins. Afghanistan&rsquo;s post-Soviet struggle scored lowest with a minus-10 &mdash; with zero good factors and 10 bad ones &mdash; and a loss to the Taliban.

&ldquo;It&rsquo;s a diagnostic tool, and by and large [NATO forces] are trying to do the good things,&rdquo; Paul said.

McNaughton, who was speaking in an unofficial capacity, said he thought the method was flawed because the good things and bad things were weighted equally. For instance, areas of needed improvement, according to the scorecard, were legitimate government, security and interdiction of insugents&rsquo; tangible support.

&ldquo;These areas are critical,&rdquo; he said. &ldquo;If you don&rsquo;t have those, it doesn&rsquo;t matter that girls are going to school.&rdquo;

The scorecard tallied the factors that Paul previously identified in 30 insurgencies over the past two decades and published last year.

The major accomplishment of that study, Paul said, was to provide a scientific basis for determining what are good and bad COIN practices.

&ldquo;This is systematic evidence,&rdquo; he said.

Among the key findings of that study: &ldquo;The balance of good versus bad practices perfectly predicts outcomes,&rdquo; and &ldquo;Poor beginnings do not necessarily lead to poor ends.&rdquo;

That study&rsquo;s most significant finding, Paul said, was that effective COIN practices &ldquo;tend to run in packs.&rdquo;

Of the 30 cases studied, only eight were counted as government wins.

Two U.S. Naval War College professors took issue with that study, questioning the relevance of many of the 30 insurgencies. They also criticized the study&rsquo;s defining good things, without saying how to accomplish them and disagreed that counterinsurgent forces should try to do all the good things all the time.

Sizing up Afghanistan, and deciding which good and bad factors were present, was done earlier this year by some 13 emailing experts &mdash; military officers with recent deployments, authors of recent books or reports on Afghanistan and editors of &ldquo;Small Wars Journal.&rdquo;

They were asked to give their views based on a worst-case scenario: If something was good in the east but bad in the south, they were instructed to score it as a bad thing, Paul said.

Among the bad things, the experts agreed, is that NATO is seen as an occupier, which creates new grievances; militias work at cross purposes with the anti-insurgency forces; and COIN forces have a different level of commitment than the government, which isn&rsquo;t seen as legitimate or competent. The experts completed their review early this year, before President Barack Obama announced the drawdown of 33,000 troops by the end of next summer, and before preparations to hand over some NATO-held areas to Afghan control.

The experts agreed that negative perceptions about the government and corruption of Afghan police, and insurgents&rsquo; continuing support from Pakistan are not under the control of NATO military forces, but rather &ldquo;are all squarely on the Afghan government or the Afghan forces,&rdquo; the report said.

Lt. Col. Elizabeth Robbins, a Pentagon spokeswoman, said of the report: &ldquo;We are aware of these requirements and current challenges, and we are working to address them.&rdquo;

&ldquo;All insurgencies are unique,&rdquo; she said. &ldquo;We are confident in our current strategy.&rdquo;

Among good factors identified in the current Afghan War were: COIN forces have intelligence capabilities to disrupt insurgent processes or operations; are strong enough to force insurgents to fight as guerrillas; avoid excessive collateral damage or disproportionate use of force; and invest in infrastructure improvement projects and development.

Among factors on which the experts failed to reach consensus were whether the majority of the population supports or favors the counterinsurgency forces.

&ldquo;One of the most striking observations (and one about which there appeared to be consensus) was that &lsquo;the Afghan people hate the Taliban, but they equally despise the government,&rsquo;&rdquo; the report said.

Additionally, the experts were divided over whether NATO is succeeding in expanding areas it has secured. The report said if ISAF was preponderantly successful in that, that also could improve the &ldquo;perception of security,&rdquo; and thus the situation and the scorecard.

&ldquo;But one interesting thing from the scorecard is, there is no A for effort,&rdquo; Paul said.