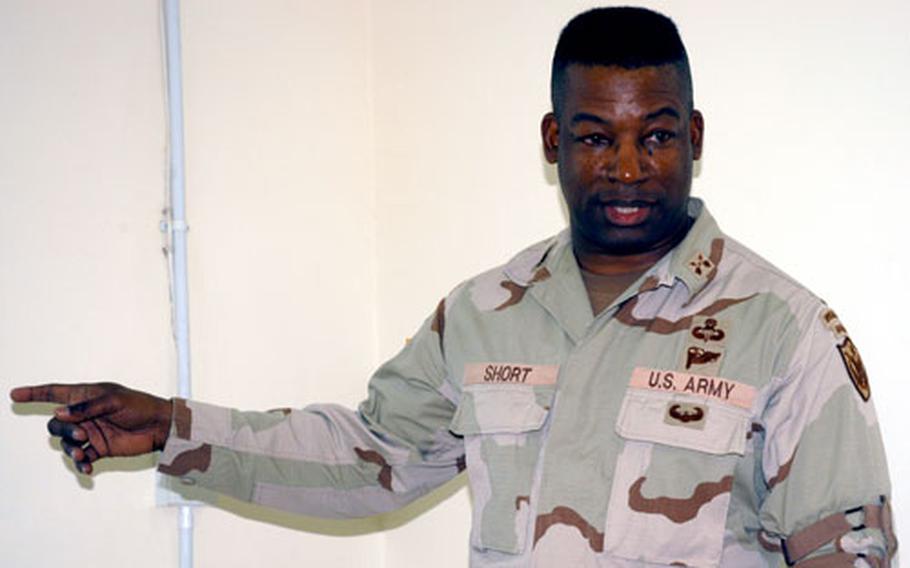 Col. Chris Short, commandant of the new Counter-Insurgency Academy at Camp Taji, has trained 350 brigade, battalion and company leaders since November in ways to defeat an insurgency by winning over the Iraqi people’s hearts and minds. (David Olson / U.S. Army)

CAMP TAJI, Iraq &#8212; In a new effort to shift the military focus from war-fighting to winning Iraqi hearts and minds, commanders and their staffs coming to Iraq must now spend five days in a class studying counter-insurgency theory, techniques and intelligence.

The Counter-Insurgency Academy, run by an Army Special Forces colonel on this sprawling base north of Baghdad, started up in November under orders from Gen. George Casey. So far, its instructors &#8212; Special Forces soldiers, contractors and Iraqi guest lecturers &#8212; have taught some 350 company, brigade and battalion commanders and their staffs that the conventional operations they&#8217;ve been trained to do &#8212; sweeps, searches and raids &#8212; will not defeat the insurgency.

The academy is an acknowledgment that the Iraq insurgency is likely to continue for years.

According to statistics included in a report by Joseph A. Christoff, director of international affairs and trade at the Government Accountability Office, who testified Feb. 8 before the Senate Foreign Affairs Committee, coalition forces&#8217; efforts over the past two years to defeat the insurgency appear to have been ineffective.

Although kicking in doors may still be necessary, Short says, it also tends to increase support for insurgents. There are better, more subtle, indirect ways to woo the population toward supporting U.S. and their own fledgling government, and away from supporting insurgents.

Those ways include understanding the culture, doing better &#8220;information operations&#8221; to counter insurgent propaganda, and trying to see things from an Iraqi perspective.

The conventional warfare response to roadside bombs has been to try to find them and clear them, Short said, and search for the bomb-maker. &#8220;What we teach is: &#8216;Hold up. Somebody&#8217;s helping them. People are disenfranchised and they see helping the terrorists as an alternative.&#8217;&#8221;

So an important part of the effort, he said, is economic backup to improve people&#8217;s lives, provide services, all the while trying to stay in the background, with Iraqi army and other Iraqi officials in the front, giving legitimacy to the new government.

The statistics there have been discouraging as well. According to testimony at the Feb. 8 Senate Foreign Affairs Committee hearing, almost every measure of the performance of Iraq&#8217;s basic services &#8212; oil, electricity, water and sewerage &#8212; show the country in worse shape than before the war, even though $16 billion of American taxpayer money has already been disbursed in the Iraq reconstruction program.

The course also teaches discerning the &#8220;centers of gravity,&#8221; or influential trends and leaders in an area, and getting thus-enlightened soldiers out from their bases and mixing with the Iraqi people on dismounted patrols.

Using the lens of history

CAMP TAJI, Iraq &#8212; Although Col. Chris Short said the Counter-Insurgency Academy course keeps theory to a minimum in favor of practical, hands-on information, officers do get a historical overview that touches on insurgencies in Algeria, Malaysia and Latin America, and explores why they were or were not successful.

Historically, the British, who once oversaw a far-flung empire, are seen as among the most proficient in dealing with insurgencies.

In the latest edition of the U.S. Army journal, Military Review, a senior British officer who spent a year in Iraq, Army Brig. Nigel Aylwin-Foster, critiqued the U.S. postinvasion performance.

Aylwin-Foster wrote that while the U.S. military was spectacular and admirable in many regards, it &#8220;seemed weighed down by bureaucracy, a stiflingly hierarchical outlook, a pre-disposition to offensive operations and a sense that duty required all issues to be confronted head-on.&#8221;

U.S. forces &#8220;fervently believed in the mission&#8217;s underlying purpose, the delivery of democracy to Iraq,&#8221; he wrote. While this was helpful in the face of setbacks, &#8220;it also encouraged the erroneous assumption that given the justness of the cause, actions that occurred in its name would be understood and accepted by the population, even if mistakes and civilian fatalities occurred in the implementation.&#8221;

Short and his staff are trying to remedy that and help commanders become more effective through nonviolent methods.