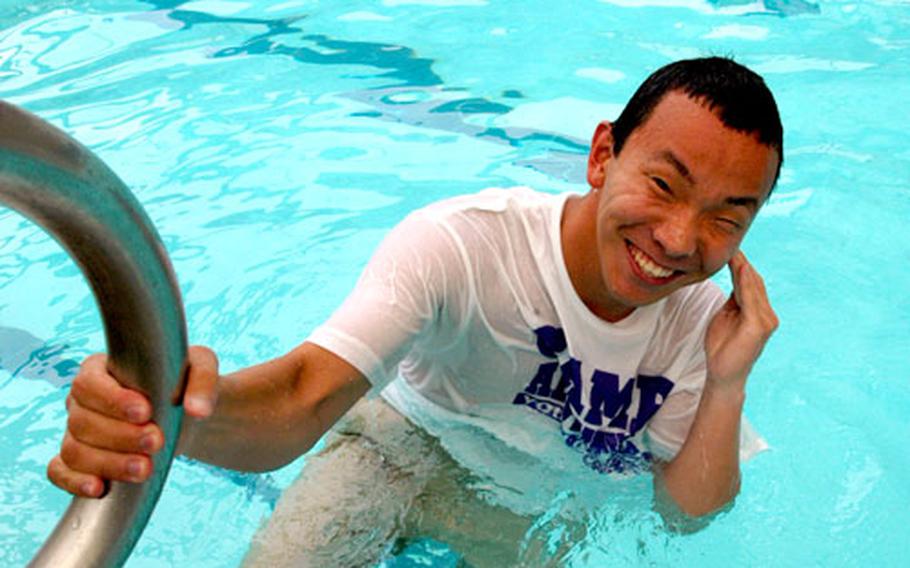 Kenny Lablanc, 9, of Louisiana, shows off his dive-bombing skills at the Camp Red Cloud pool on Tuesday. (Seth Robson / S&S)

CAMP RED CLOUD, South Korea &#8212; For University of Iowa student Nathan Joyce, working as a Camp Adventure counselor here is a chance to get in touch with his roots.

Joyce, one of two counselors supervising soldiers&#8217; children at Camp Red Cloud this summer, was born to a South Korean mother in Pusan but grew up in Iowa after American parents adopted him, he said.

The 21-year-old does not speak Korean and had never visited the land of his birth until last month. Other South Koreans are surprised when they try to talk to him in their own language.

He appears to be popular with the children, who happily gave him a dunking in his T-shirt and shorts after their lesson.

One of the best swimmers among the Camp Adventure kids, Kenny Lablanc, 9, of Louisiana, was keen to show off his dive-bombing skills at the pool.

Lablanc said the swimming sessions were his favorite part of the holiday program.

Copeland, who recently arrived in Area I from Germany with her parents, who both serve with the U.S. Army in South Korea, said the water park impressed her.

The University of Northern Iowa-run Camp Adventure is available at U.S. military bases worldwide and served up to 10,000 children per day in 2003, officials said.