Could the next great songwriter be in uniform? Mike Corrado, and Infantry/operations officer, sits with his acoustic Takamine at the entrance of Camp Fallujah, Iraq. (Courtesy to S&S)

Mike Corrado, and Infantry/operations officer, sits with his acoustic Takamine at the entrance of Camp Fallujah, Iraq. (Courtesy to S&S) 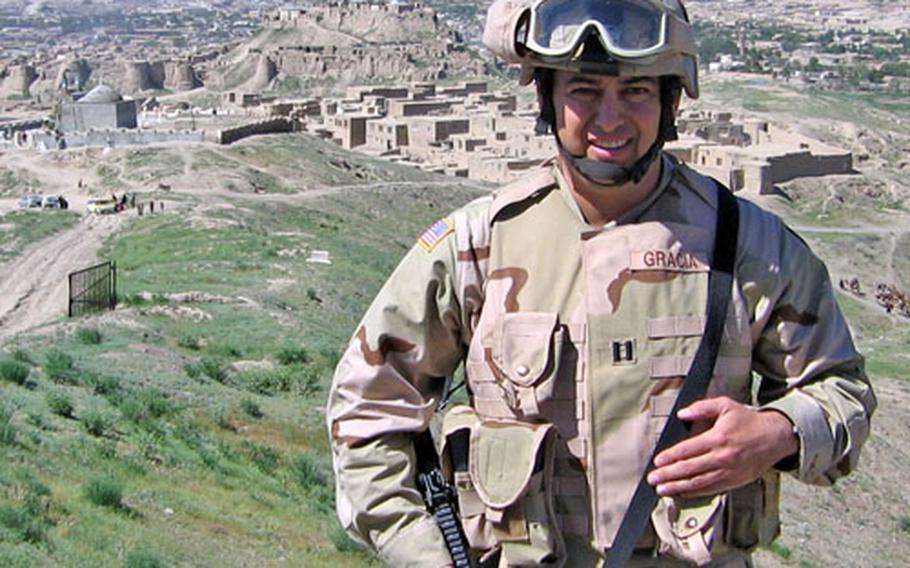 I went down to JeopardyBut Alex just laughed at meHe said son we need someone with a high IQAnd son, that someone clearly just ain&#8217;t you

WASHINGTON &#8212; Johnny Cash wrote songs while an Air Force enlisted guy. Kris Kristofferson did the same while an Army officer. And maybe that next big-time military songwriter is out there.

That&#8217;s what the Dallas Songwriters Association and the Department of Defense&#8217;s America Supports You campaign want to find out.

The Songs from the Soul of Service songwriting contest has been soliciting entries from servicemembers stationed around the globe, according to spokesman William Brown.

The contest closed to submissions Feb. 15 with over 400 entries from around the world, including from the United States, Japan, South Korea, Germany, and Iraq and Afghanistan.

&#8220;I NEVER expected to be sending in some material while dealing with these knuckleheads out here trying to kill us,&#8221; one entrant told the organizers via e-mail.

On June 16th, a concert will be held at the Killeen Community Center Amphitheater near Fort Hood, Texas, to celebrate the songs and songwriters in the U.S. military.

Music industry professionals, including &#8220;Grammy-winning and nominated producers and artists,&#8221; will make a CD of the best songs, the proceeds of which are to help support charities benefiting military personnel and their families, Brown said.

One writer, Army Capt. Franke Gracia, submitted &#8220;Working Man&#8221; in honor of the men in his family who work with their hands.

Gracia said country singers Aaron Tippin or Toby Keith would be &#8220;perfect&#8221; to record his hit.

It could happen. In addition to industry exposure, Brown said, they are working on getting one or more songs recorded by a big-name artist.

For Gracia, if it happens, it happens. Meantime, he has plenty on his plate.

&#8220;I was recently awarded the Bronze Star Medal here in Afghanistan,&#8221; he wrote. &#8220;I am very proud of that. When I go home, I am going to have a very short ceremony with only close family and friends. My uncle, a blue-collar man, a veteran of the Korean War, will pin that medal on me.