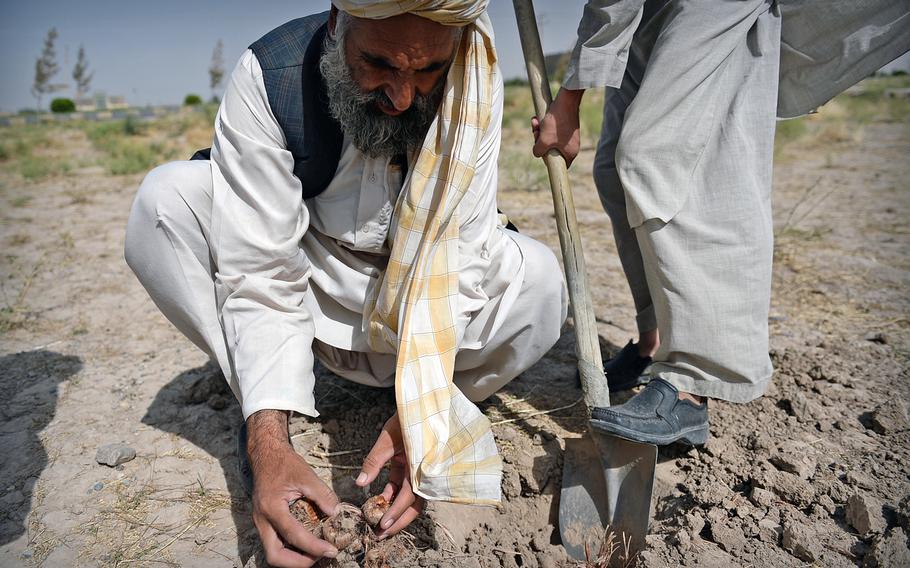 Nasir Ahmad removes saffron bulbs from a hole on a few acres of land where he grows the spice on the outskirts of the city of Herat, in western Afghanistan. Ahmad says he makes six times as much money growing saffron as he did when he grew poppies for drugs. (Josh Smith/Stars and Stripes)

Nasir Ahmad removes saffron bulbs from a hole on a few acres of land where he grows the spice on the outskirts of the city of Herat, in western Afghanistan. Ahmad says he makes six times as much money growing saffron as he did when he grew poppies for drugs. (Josh Smith/Stars and Stripes) 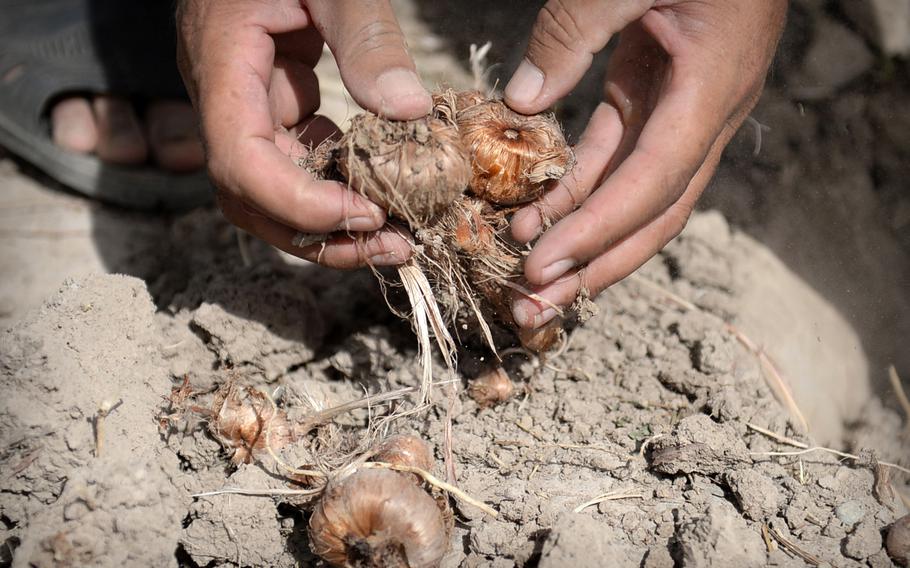 Nasir Ahmad, a farmer in western Afghanistan, holds saffron crocus bulbs in a field he leases on the outskirts of the city of Herat. He has been growing saffron for 13 years, and says it is a lucrative business. (Josh Smith/Stars and Stripes) Parwiz Afghan displays some saffron for sale in his shop in Herat, in western Afghanistan. He insists that the quality of Afghan saffron rivals or is better than that produced by countries with a larger share of the world market. (Josh Smith/Stars and Stripes) Packages of locally grown and produced saffron line the shelves of a shop in Herat, in western Afghanistan. Analysts say professional processing and packaging remain a barrier to exporting more Afghan saffron to international markets. (Josh Smith/Stars and Stripes) 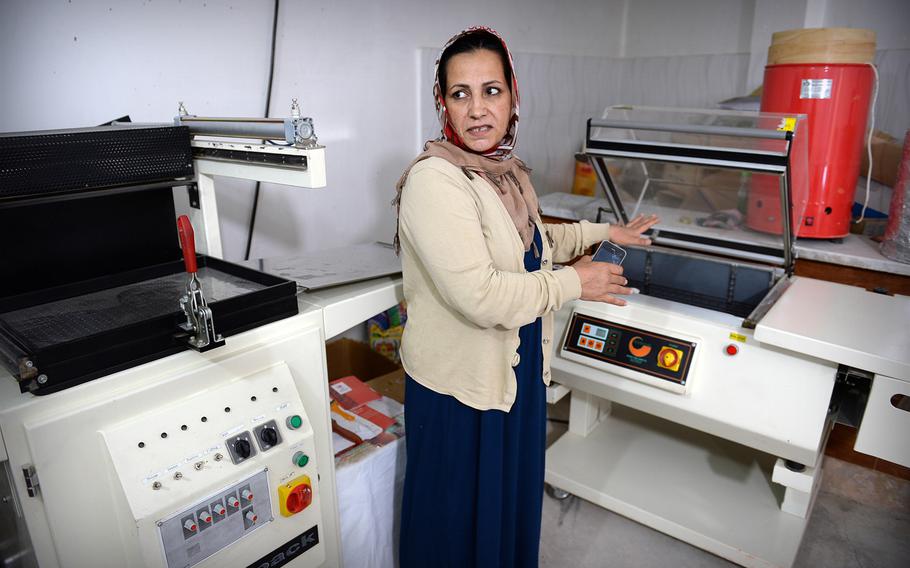 Sima Ghoryani, president of the Herat-based Ghoryan Women Saffron Association, motions to machines used to package saffron. Her organization has recieved hundreds of thousands of dollars in U.S.-backed loans, which she said have been vital to trying to help the women in her organization sell their saffron to a wider market. (Josh Smith/Stars and Stripes)

HERAT, Afghanistan — The hot summer wind sent dust whirling into the air as Nasir Ahmad deftly picked a handful of brown saffron crocus bulbs from a freshly dug hole in the parched earth.

With his fingers, weathered by decades of farming in western Afghanistan’s deserts, he plucked the lingering dirt clods from the bulbs. It would still be months before they yielded their valuable flowers, but Ahmad cradled them gently.

A towering figure in a bright yellow turban and long, graying beard, Ahmad gazes across the few acres that will determine his future.

For years, Ahmad, 45, grew opium poppies, which are used to produce heroin. As it does for many other Afghans, the illicit drug trade provided him with a stable income in a country beset by economic hardships, especially in the more rural areas.

Under the Taliban, opium-poppy cultivation had been banned and the crop virtually eliminated, but cultivation has rebounded since the U.S. invasion in 2001, partly because of the collapse of state control and law enforcement.

At the very time when many other farmers were going back to growing opium poppies, Ahmad made a contrarian business decision: He switched to growing saffron, the world’s most expensive spice. Made from the crimson stigmas plucked and dried from a type of crocus flower, saffron can sell for more than $1,200 a pound, compared with less than $2 per pound for a spice such as cumin.

Afghanistan produced 4.5 tons of saffron last year, most of which was exported abroad, according to Sayed Nabi Shinwari, who heads the vocational training program at Afghanistan’s Ministry of Agriculture, Irrigation and Livestock. The number of people in Afghanistan involved in growing and processing the spice is not known, but the ministry says it has distributed seeds to nearly 500 farmers and has trained 2,000.

Afghan officials contend that many poppy farmers in Herat have switched to growing saffron, and international officials often hold saffron up as an example of ways Afghan farmers can successfully grow more legal and less harmful crops.

But the United Nations says overall poppy production in Afghanistan remains near all-time highs. As the international military coalition prepares to pull out its combat troops at the end of the year, many question whether Afghanistan has any chance of shedding its status as the top opium producer in the world. The U.S. has invested upward of $7 billion in poppy eradication and crop substitution programs.

More than a decade after he switched to growing saffron, Ahmad says he has no regrets and that other farmers would be wise to follow suit.

“Drugs just bring so many problems. I had to use all these chemicals and it was harder to grow,” he said.

Most important of all to him, he said, “I make more than six times growing saffron than I did growing poppies. When other farmers understand that they will make more money, I think they will change their minds.”

But Ahmad said he likely would not have been as successful without loans from foreign aid organizations like the U.S. Agency for International Development and the International Center for Agricultural Research in the Dry Areas. Those loans have been used for everything from buying seeds and processing equipment to advertising and packaging.

According to the Agriculture ministry, saffron farmers can gross anywhere from $1,400 per acre in first year to a peak of more than $14,000 per acre during the third and fourth years of the seven-year growing cycle. By contrast, the average poppy farmer grosses about $1,800 per acre, according to the U.N.

A bright spot Afghanistan is rife with examples of international aid gone awry. In July, the U.S. government’s Special Inspector General for Afghanistan Reconstruction released a report blasting a U.S. Department of Agriculture-funded initiative to bring soybean farming to Afghanistan. In that case, the watchdog said that there was little market for soybeans in Afghanistan and that conditions in the country aren’t particularly favorable for the crop.

Saffron, however, doesn’t suffer from any of those problems. It’s a popular ingredient in local dishes, and officials say it can be cultivated in most of the country’s 34 provinces.

Afghans and aid officials say that the programs aimed at jump-starting processes that can produce saffron suitable for an international market have mostly been a success. (A SIGAR spokesman told Stars and Stripes he is not aware of any problems reported with saffron aid programs.)

“Saffron is one of several crops where Afghanistan has a competitive advantage because of a long growing tradition and favorable growing conditions,” said Wayne Nilsestuen, director of USAID’s Office of Agriculture in Afghanistan. “Also, it is a highly profitable crop that generates lots of employment for women and low-income families.”

Saffron is now grown on more than 1,800 acres in 32 of Afghanistan’s 34 provinces, according to the Agriculture Ministry.

Through a program called the Agricultural Development Fund, which is administered by the Afghan government, USAID has provided at least $23 million in loans directly to some 16,000 farmers around the country, including some who grow saffron, though the agency could not say how much of that money went to saffron farmers.

“USAID and other international aid was very important for us to be able to replace other crops with saffron,” said Faqir Ahmad Baianger, who heads the Herat office of the Afghan national Directorate of Agriculture, Irrigation and Livestock. “Our production has expanded so much in recent years.”

Among the recipients of those loans was the Ghoryan Women Saffron Association in Herat, which provides services for hundreds of women who work in saffron production. The organization received two loans totaling more than $400,000, which were used to buy saffron from women producers and package it for sale in larger markets.

For Sima Ghoryani, president of the association, the international aid was vital.

“Ninety-five percent of the work on saffron is done by women, and we need that help for the very important training needed to get women working outside the home,” she told Stars and Stripes during an interview in a small room used to package the saffron.

Obstacles to success In a small store in downtown Herat, shopkeeper Parwiz Afghan dusts the glistening plastic vials that hold small portions of dried saffron. In keeping with its high cost, saffron is usually packaged in a way that recalls other luxury items, such as perfume.

When Afghan, 23, gently dumps the pungent contents of one bottle onto his counter, he beams with pride. “Afghan saffron is more natural and better quality than that from other countries,” he said. “Iran and Pakistan, they just don’t have it.”

That’s a claim backed up, not surprisingly, by a 2013 report commissioned by the Afghan Investment Support Agency. It found that Afghan saffron may be of higher quality than that produced in Iran — which accounts for more than 80 percent of the world’s saffron production. Still, the report says, there are many obstacles ahead for the industry in Afghanistan.

These include lack of access to capital, skilled laborers and the necessary infrastructure. With the saffron harvest still months away, the processing machinery in Ghoryani’s back room sat silent. It represents the next big challenge for Afghan saffron producers, she said: processing the saffron in a way that keeps it up to international standards so sellers can export their products. Saffron production is more sophisticated than opium production because it requires a hygienic drying and packaging process, UN officials wrote in a report last year on the viability of replacing drug production with saffron cultivation.

Because Afghan farmers use traditional farming methods, the saffron is often of relatively high quality. But a lack of equipment and training needed to effectively package and process the spice has historically undermined efforts to export more saffron.

According to the Afghan Investment Support Agency report, Iran produces 200 tons of saffron per year, Greece turns out between five and eight tons, while Afghanistan produces about four tons on a yearly basis. Other top saffron producing areas can be found in countries like India, Pakistan and Spain, which all produce between one and three tons.

To try to give Afghan farmers more of a chance to compete with saffron powerhouses, Afghan companies like Ariana Saffron Co. in Herat have focused on building the infrastructure necessary to process the spice to international standards.

Ariana — which had more than 600 employees and subcontractors within three years of its establishment in 2006 — has gotten help from aid programs, including a training regimen offered by the Afghan government’s Rural Enterprise Development Program. It has also received a $202,487 ADF loan used to buy 134 kilograms of dried saffron from farmers in western Afghanistan.

“Three-quarters of Afghans depend on agriculture for their livelihoods,” said USAID’s Nilsestuen. “Assistance to the entire agriculture production chain — farmers, traders, wholesalers, manufacturers and retailers — is critical not just for economic development, but to feed millions of Afghan families, raise household incomes and generate jobs.”