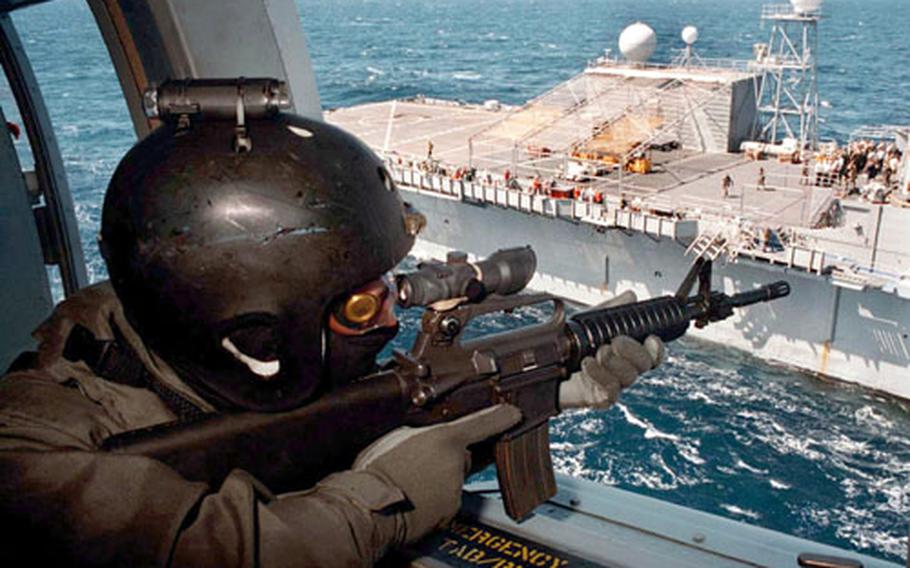 American naval assets in the Pacific region may play a pivotal role if the United States decides to begin looking for nuclear materials or arms shipments aboard North Korean ships.

Speaking on NBC&#8217;s &#8220;Meet the Press&#8221; last month, Secretary of State Colin Powell said the United States will stop and search North Korean ships if it feels it is necessary.

A sizable naval presence, consisting of 19 ships including the aircraft carrier USS Kitty Hawk, are forward-deployed with the 7th Fleet headquartered at Yokosuka Naval Base, south of Tokyo.

However, a Commander, U.S. Naval Forces, Japan, spokesman would not speculate if 7th Fleet assets would be called upon if such maritime intervention becomes necessary.

North Korea revealed that it resumed its nuclear power program recently. The resumption, the communist country said, started after the United States stopped shipments of heavy fuel oil &#8212; 500,000 tons a year. The United States ships oil to the North under a 1994 Agreed Framework when North Korea agreed to shut down a nuclear plant at Yongbyon that produced plutonium.

For years, North Korea has exported missiles and missile technology to countries including Iraq, Iran and Pakistan.

North Korea could produce weapons-grade plutonium in its nuclear reactors to sell on the world market to bolster cash flow. Those materials, along with exported North Korean missiles, could be shipped via sea routes.

&#8220;We would intercept anything we think deserved to be intercepted. We have the right to intercept and take whatever action we believe appropriate in the circumstances,&#8221; Powell said during a Dec. 28 appearance on &#8220;Meet the Press.&#8221;

Responding to reporters&#8217; questions about whether China and Japan also agreed to try to intercept arms shipments, Powell said, &#8220;We haven&#8217;t been in touch with the Japanese or Chinese and Russians, specifically, on the issue of interception,&#8221; Powell said

In a bid to aid diplomacy, the U.N. International Atomic Energy Agency governors last week decided not to refer North Korea to the full Security Council, the AP reported.

After holding talks with Japan and South Korea in Washington on Tuesday, U.S. officials offered dialogue with Pyongyang on its nuclear issue by saying they are &#8220;willing to talk to North Korea about how it meets its obligations to the international community.&#8221;

While North Korea did not respond directly to the offer, its state-run Korean Central News Agency last week accused the United States of increasing the danger of war on the Korean peninsula.

North Korea usually takes some time to formulate its policies and to respond, he said.

Pressing Japan-based U.S. naval vessels into a search of North Korean ships if directed by the Bush Administration is problematic given the U.S.government&#8217;s desire to resolve the nuclear issue diplomatically.

Toshiyuki Shikata, a retired Japan Ground Self-Defense Force lieutenant general and a professor of international law and politics at Teikyo University in Tokyo, said inspections of North Korean ships would not be a bad thing for Japan.

Shikata said he believes North Korea might have already smuggled munitions and Stinger missiles into Japan, which could be intended for use against U.S. military bases in Japan.

Rather than a blockade, he said the U.S. can employ an interdiction of North Korean ships.

Shikata thinks it would be advantageous to inspect North Korean ships at distant places such as Yemen, or at the East China Sea, where North Korea&#8217;s military planes cannot reach them.

&#8220;North Korean military planes and ships will try to stop the inspections and may result in the conflicts if inspections are carried out near North Korea,&#8221; he said. &#8220;I am most afraid of that.&#8221;

The following are the 7th Fleet&#8217;s 19 ships forward-deployed in the Pacific region.

U.S. Navy has played its role in maritime dramas

The United States has traditionally relied on its naval forces as instruments of national policy.

&#8226; U.S. and Spanish warships intercepted a ship carrying North Korean Scud missiles in the Arabian Sea in December, but the United States let the shipment sail on to Yemen after it was determined it had no legal grounds for confiscating the cargo.

In what became known as the Cuban Missile Crisis, President Kennedy relied on Navy ships enforcing a blockade to compel the Soviets to remove offensive missiles from Fidel Castro&#8217;s Cuba in the fall of 1962. In cooperation with the other U.S. services, the Navy employed military power in such a way that Kennedy did not have to resort to war to protect vital Western interests, according to Navy historical records.

&#8226; One of the most tense naval face-offs in the Far East happened in the Sea of Japan 35 years ago this month.

On January 23, 1968, the USS Pueblo, an intelligence-gathering ship that earlier sailed from Yokosuka Naval Base, Japan, was attacked by North Korean naval vessels and MiG fighter jets in international waters.

One sailor was killed, and several were wounded. The 82 surviving crewmembers were captured and held prisoner for 11 months.

In response to the Pueblo&#8217;s seizure, the United States sent the aircraft carriers USS Enterprise, Yorktown, Ranger, and their supporting task groups to positions off the North Korean coast.

Dispatched from Southeast Asia, where it was operating off South Vietnam, the battleship USS New Jersey also joined the naval armada.

Together, they constituted the largest naval force assembled in response to an emergency since the Cuban Missile Crisis, Navy historical records indicate.

&#8226; On May 12, 1975, the Cambodian Navy seized an American merchant ship, SS Mayaguez, in international waters off Cambodia&#8217;s coast. President Ford insisted it not become another Pueblo incident.

The president ordered the aircraft carrier USS Coral Sea and other Navy ships to the Gulf of Thailand and U.S. military planes in the Philippines to find the Mayaguez and keep it in sight.

The destroyer Holt was directed to seize the Mayaguez, while Marines airlifted from Okinawa were to rescue the crew, at least some of whom were believed to be held on Kho Tang.

Concurrently, the Coral Sea would launch four bombing strikes on military targets near Kompong Som to convince the Khmer Rouge the United States was serious.

Three days after the Mayaguez seizure, six Air Force helicopters were dispatched to the island. One came under heavy enemy fire as it approached the island&#8217;s eastern beach. The aircraft crashed into the surf with 26 men on board. Half were rescued, 13 were lost at sea.