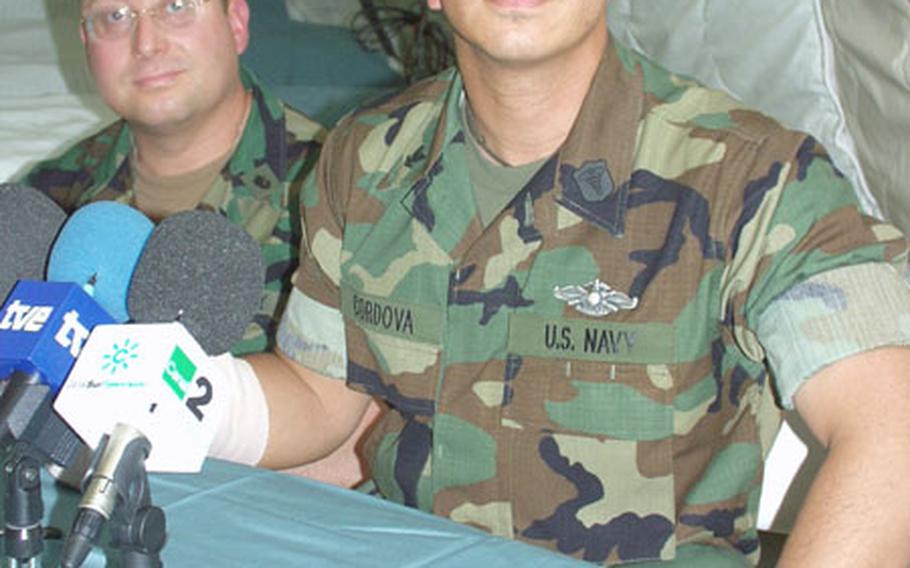 That day, shrapnel shot through his arm and into his friend&#8217;s shoulder while Cordova reloaded a machine gun. He didn&#8217;t feel any pain until he saw the blood.

Instead of Cordova, a hospital corpsman, treating his injured comrades in the 2nd Battalion, 8th Marines, they were helping him. A strange twist in a war fraught with more than a few surprises.

Cordova talked about the incident and his first taste of combat to a group of reporters at a field hospital here in southern Spain. He is one of 15 battlefield casualties to be treated at Field Hospital Eight, a 116-bed tent facility in the middle of this base.

It is where he will stay until doctors send him to the United States to recover.

Cordova, 24, of Sugarland, Texas, said he and the Marines in his unit had never seen combat until they got into Iraq. They didn&#8217;t know what to expect.

The unit didn&#8217;t expect the resistance they encountered when they got to An Nasiriyah, the site of some fierce battles between U.S. and Iraqi forces.

Moments into a firefight, Cordova became one of the unit&#8217;s first casualties.

He said the moment after he got hurt it was like a movie, things slowed down and the sounds of the battlefield suddenly went silent.

It was his first combat in the more than three years he has been in the Navy as a corpsman.

Cordova was helping reload an MK-19 machine gun grenade launcher on the banks of a river in An Nasiriyah when their unit began receiving fire from three directions. The unit was helping provide security for a resupply convoy.

When he opened the lid of the ammo can, a mortar landed nearby. The explosion sent pieces of hot metal into his arm.

Marines were able to stop the bleeding and Cordova was eventually flown to Rota for further treatment.

Capt. Chris Olch, a doctor at the field hospital, said the shrapnel tore some of the soft tissue in Cordova&#8217;s forearm but the nerves and the arteries were spared.

Cordova will not be able to rejoin his unit in the Persian Gulf.

That may be more painful than his forearm.

He said the fact that he is not with his unit is disappointing. He had hoped that his injury would not prevent him from returning to the front lines.