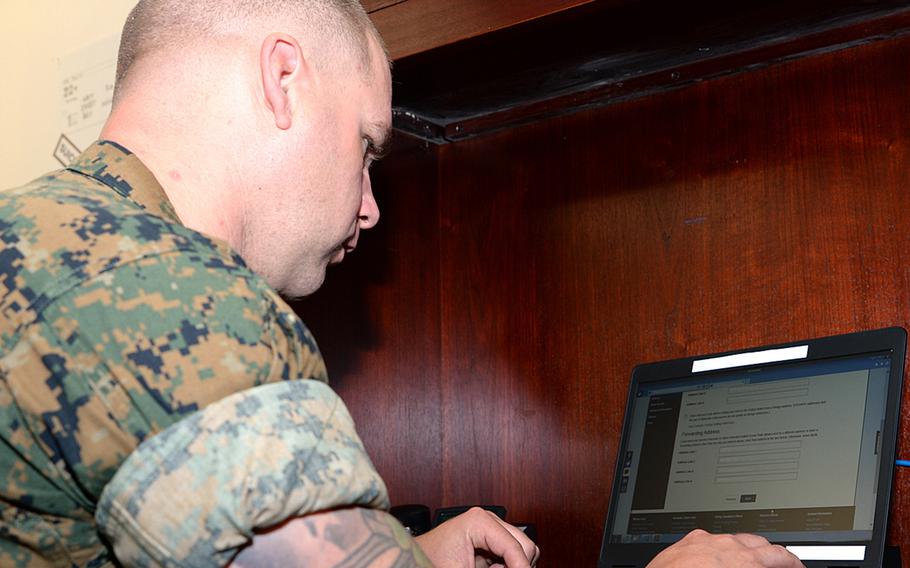 Gunnery Sgt. Tyler Nichols registers to vote during the Marine Corps Logistics Base Albany, Ga.'s first voting convention in 2017. Marines can encourage others to vote, but they remain restricted both in person and online when it comes to advocating for political candidates. (Nathan Hanks/U.S. Marine Corps)

With political campaigns ramping up and presidential impeachment efforts underway, the Marine Corps issued a reminder about what political activities its members can engage in legally, including what’s acceptable to tweet, “gram” and otherwise share on social media.

The memo, published Monday, tracks with similar guidance put out to all the military services at least since 2015, and adheres to ethics guidelines the Defense Department’s Office of the General Counsel published in April 2018.

As in past years, the Marine Corps’ guidance makes clear that active duty troops are allowed to vote, express their opinions, encourage others to vote and sport bumper stickers on their vehicles. They can even dash off a sharply worded letter to the editor.

Voicing such views via social media should be treated the same as a letter to the newspaper, the memo states. But accounts that identify the user as active duty must explicitly state that any views expressed are not those of the Defense Department or Marine Corps, it warns.

The new memo outlines other longstanding limits on political activities online and in person, which are more restrictive for uniformed service members than for others.

Troops cannot, for example, post direct links to a political party or partisan candidate, campaign or cause. And while they can “like,” “friend” or “follow” a partisan candidate on social media, they cannot encourage others to do so.

“Such activity is akin to distributing literature on behalf of those entities, which is prohibited,” the memo states.

The social media guidance does not apply to servicemembers who are not on active duty, as long as they don’t act in a way “that could reasonably create the appearance of official sponsorship, approval, or endorsement by the DoD or the Marine Corps,” it states.

Active duty service members are also prohibited from activities like stuffing envelopes or manning phone banks for political candidates, fundraising on their behalf, or displaying large signs in a personal vehicle or at on-base housing.