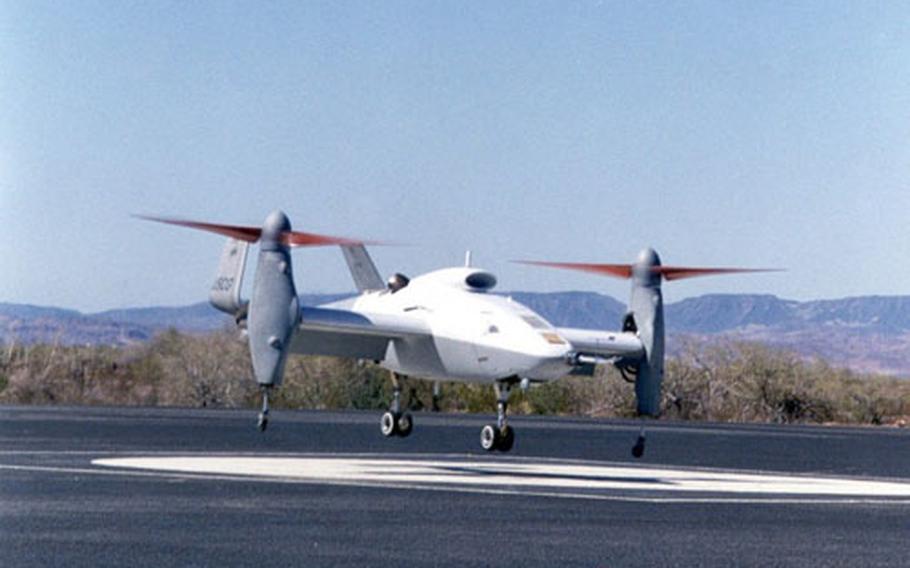 The Bell Helicopter unmanned aerial vehicle, the Eagle Eye, is being pursued by the Marine Corps. It uses tilt-rotor technology, similar to the Osprey troop transport aircraft. (Courtesy of Bell Helicopter)

ARLINGTON, Va. &#8212; The Marine Corps&#8217; leadership has thrown its weight behind an unmanned airframe that looks like the controversial tilt-rotor MV-22 Osprey aircraft, only smaller.

A week ago, the Corps&#8217; aviation leader, Lt. Gen. Mike Hough, told an audience at a American Helicopter Society conference that Bell Helicopter&#8217;s &#8220;Eagle Eye&#8221; tilt-rotor UAV was the &#8220;way to go,&#8221; according to an article published on Uvonline.com, a news and business information service for the UAV and unmanned systems&#8217; community.

But the general&#8217;s remarks are too strong for the Corps&#8217; actual commitment level and current intentions for the unmanned airframe, which has been in the making for 12 years, said Corps spokesman Capt. Joseph Kloppel.

&#8220;I think the reason it could be considered controversial is because tilt-rotor technology is something very new,&#8221; Kloppel said.

The Corps has made no commitment to going with the Bell program, or even an unmanned tilt-rotor aircraft at all, Kloppel said. &#8220;We&#8217;re looking to explore this technology further, and overall, we like the tilt-rotor concept. We think it&#8217;s the way of the future.&#8221;

In spite of tumultuous beginnings, Marine Corps leadership placed great support behind the Osprey, a troop transporter that takes off and lands like a helicopter, but flies like an airplane. The program, grounded in December 2000 after two crashes killed 23 Marines, resumed testing in late May 2002.

Bell Helicopter Textron, which makes both the Osprey and the Eagle Eye, at present has no competition in the unmanned tilt-rotor market, said Bell spokesman Mike Cox. &#8220;We are the only tilt-rotor UAV program, that is a fact,&#8221; Cox said.

The company has tested the technology for the past several years for its prime customer, the U.S. Coast Guard, Cox said.

During his remarks, Hough had said he&#8217;d like to see the Corps partner with the Navy to acquire unmanned aerial technology.

&#8220;We&#8217;ll get together with the Navy to develop common avionics-type packages to do it with, the data stuff, and then what we&#8217;ll do is take that part of the requirement and put it out to competition,&#8221; Hough was quoted as saying.

The vehicle can most likely be tailored to any Marine Corps need, including as a weapons system, Cox said. &#8220;We could arm the Eagle. We have not yet, but engineering-wise, that has been examined.&#8221;

Cox added that he was unaware of any cost estimate to date for the Eagle Eye.