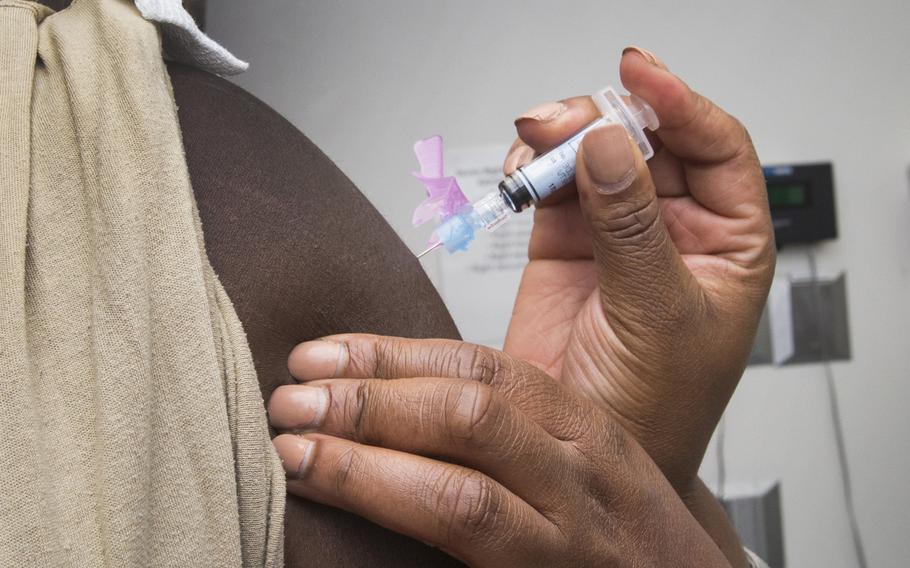 A medical technician gives an airman a flu shot at Joint Base McGuire-Dix-Lakehurst, N.J., in 2016. Some U.S. military installations in Europe will begin vaccinating active-duty personnel for influenza next week, but DOD personnel and families in Europe at many bases will have to wait until next month at the earliest for their flu jab. (Mark C. Olsen/Air National Guard)

KAISERSLAUTERN, Germany — Not enough flu shots will be available until next month to inoculate all overseas Defense Department personnel and their families, military officials said Friday, pinning the delays on the coronavirus pandemic.

At Ramstein Air Base, where a flu shot clinic for active-duty Air Force units was scheduled for next week, nothing has been penciled in for the rest of the community; U.S. Naval Hospital Naples isn’t expecting its vaccine allotment before next month; and the Army in Kaiserslautern is also planning to expand vaccination events then to the broader military community, officials said.

“The delay in scheduling community immunizations is due to COVID-19 interrupting the supply chain DOD-wide,” said Col. Ryan G.K. Mihata, 86th Medical Group commander at Ramstein, in a statement.

The base has received its first allotment of the vaccine, Mihata said, but it was less than expected. The full shipment isn’t expected until mid-November, he said.

Army medical facilities in Europe have also received some of their flu vaccine allotment but are required to vaccinate active-duty members and health care workers first, said Regional Health Command Europe spokesman Gino Mattorano. Vaccination events for the broader community are expected to start as early as the second week of November, he said — over a month later than they did in 2018 and 2019.

The delays to mass inoculation campaigns come amid a resurgence of the coronavirus in Europe that has coincided with the start of flu season.

The Centers for Disease Control and Prevention has said getting vaccinated against influenza “is more important than ever” this year “to protect yourself and the people around you from the flu, and to help reduce the strain on healthcare systems responding to the COVID-19 pandemic.”

U.S. Naval Hospital Naples will announce dates and times for immunization clinics “once we have the vaccine on hand and can verify its temperature for safety,” said spokeswoman Christina Clarke. Although she was unable to say exactly when that might be, Clarke said Naples expects to have the vaccine by next month. RAF Lakenheath in England has vaccinated more than 750 medical staff, first responders and high-risk patients after receiving an initial shipment of the vaccine last week, 48th Healthcare Operations Squadron commander Col. Alicia Matteson said in a statement.

The vaccine is available to pediatric patients, aged six to 36 months, by appointment, and the squadron plans to expand its inoculation campaign to all service members during the next three weeks, and to the rest of the base community starting Nov. 12, Matteson said.

Vaccines for children up to three years of age and the over-65s are also available by appointment at Army medical clinics throughout Europe, Mattorano said.

Spangdahlem Air Base will begin vaccinating active-duty members starting Wednesday, a base spokeswoman said. Information on when the vaccine would be available for civilians and family members was not available.

The Navy’s hospital in Rota, Spain, vaccinated active-duty members in September and was planning more mass inoculation events in the weeks to follow.

While “no significant delays” have been reported in flu vaccine deliveries, “the record number of doses being produced this season” mean production and distribution will occur over a longer time period than usual, the CDC says on its website.