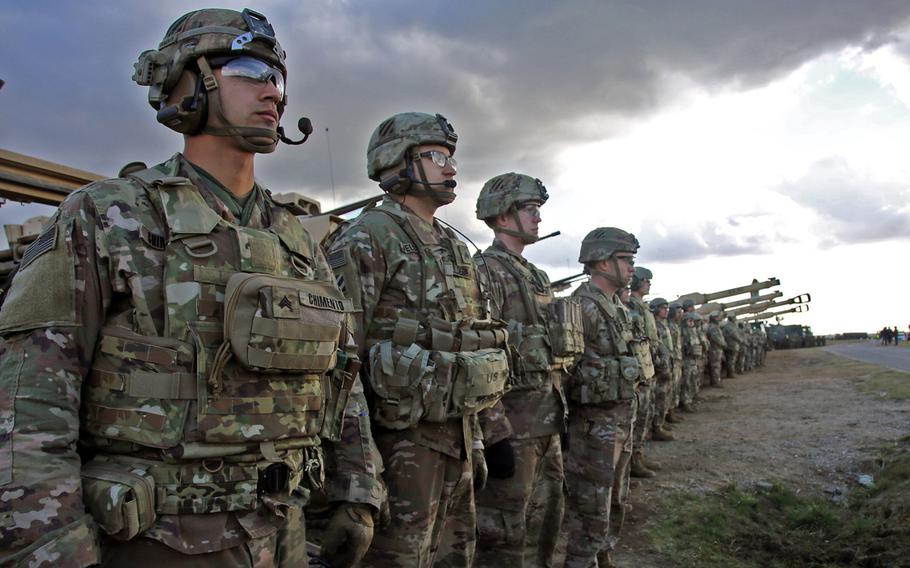 U.S. Army soldiers from the 3rd Infantry Division line up to meet U.S. and Polish dignitaries during a event at Drawsko Pomorskie Training Area, Poland, in support of Defender-Europe 20, March 11, 2020. The Pentagon ordered a halt to the deployment of forces for the exercise, which will be sharply curtailed because of concerns about the coronavirus, U.S. European Command said Monday. (Joy Dulen/U.S. Army)

The Pentagon has ordered a halt to the deployment of forces for Defender-Europe 20, which would have been the military’s largest exercise on the Continent in a generation, because of concerns about the coronavirus, U.S. European Command said Monday.

Parts of the exercise have been completely eliminated including Dynamic Front, Joint Warfighting Assessment, Saber Strike and Swift Response, which involved paratroops dropping into the Republic of Georgia and the Baltics, officials said.

“As of March 13, all movement of personnel and equipment from the United States to Europe has ceased. The health, safety and readiness of our military, civilians, and family members is our primary concern,” EUCOM said.

Forces already deployed to Europe for exercises will return to the United States, EUCOM said.

Schedules for future troops rotations in support of Atlantic Resolve – the Pentagon’s effort to deter Russian aggression in Europe – are also likely to be adjusted, officials said.

Defender would have been the culmination of several years of military build-up on the Continent and was intended to showcase the military’s ability to mobilize large numbers of forces quickly.

In addition to testing combat skills, Defender also was an exercise in large-scale logistics. The $340 million exercise started in January when units loaded up combat equipment and shipped it across the Atlantic Ocean.

Around 20,000 U.S.-based troops were to take part in Defender, joining thousands of other American and allied forces already based in places like Poland, Germany and the Baltic States. The exercise was to run through June.

Now, the military will need to figure out a schedule for returning troops and equipment that had already arrived in Europe,

The exercise was designed to be a 21st-century version of the Cold War-era “REFORGER” drills that were held regularly to demonstrate to the Soviet Union the mobility of American forces.

Since January, the Army has deployed about 6,000 soldiers from the U.S. to Europe, including a division headquarters and an armored brigade combat team. It also moved 9,000 vehicles and pieces of equipment from Army prepositioned stocks and 3,000 pieces of equipment via sea from the United States to the Continent, EUCOM said.

EUCOM said it hoped an armored brigade combat team already deployed to Europe will still be able to conduct gunnery and other combined training events as part of a smaller exercise, dubbed Allied Spirit.

Defender’s downsizing comes days after the World Health Organization said Europe was the epicenter of the global coronavirus pandemic amid a spike in the number of people testing positive for the virus. Several countries, including Germany and Poland, which would have been the main hubs for the Defender exercises, have shut their borders to try to stem the spread of the virus.

Nine people with connections to the U.S. military in Europe, including three service members, have tested positive for coronavirus so far. In Stuttgart, which is home to an American military community of around 28,000, 100 people are in isolation awaiting test results, military officials said.

Military schools and scores of on-base services across installations in Europe have shut down to try to stop the virus from spreading further.

Twelve people have died in Germany and 4,838 have contracted the virus as of Sunday, the Robert Koch Institute said on its website. In Italy, where the health ministry said 1,809 people have died after contracting the virus, U.S. bases have joined the rest of the country and locked down. Italy has had 24,747 cases of coronavirus disease since the first cases of the infection were reported at the end of January in a pair of Chinese tourists.