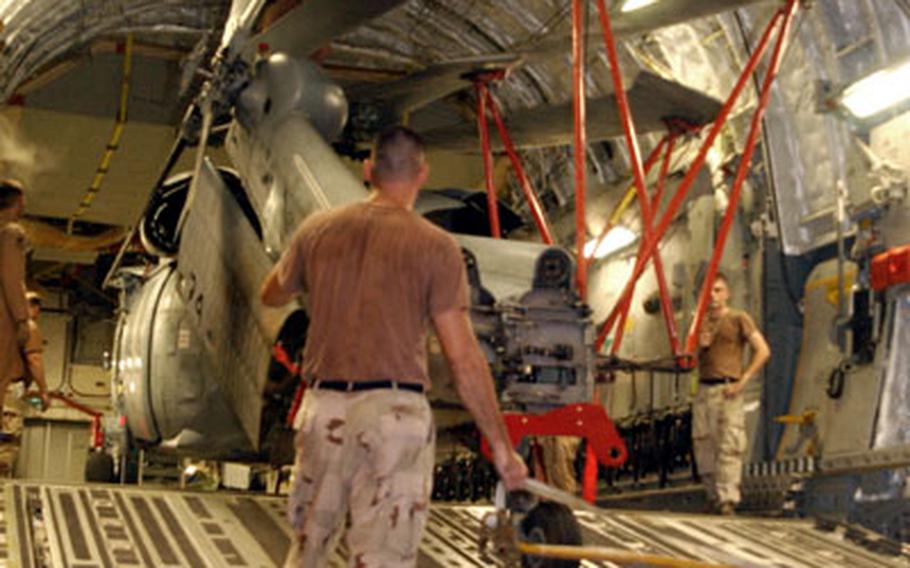 A sailor controls the tension and direction of an MH-60S Seahawk helicopter as it is loaded Monday onto a U.S. Air Force C-17 Globemaster III in Manama, Bahrain. The Seahawk will help deliver medical supplies, water and tents to earthquake victims in Pakistan. The squadron will deploy 25 sailors and two MH-60S helicopters to help those in need in Pakistan. (Kim Bennett / Courtesy of U.S. Navy)

The Navy sent two helicopters and a cargo ship to Pakistan last weekend to help deliver supplies to the devastated region.

&#8220;We will be providing flight relief, support, water, food and shelter to distant portions of Pakistan [and] flying to different points most affected by the earthquake,&#8221; Lt. Cmdr. Todd Vandegrift, HSC-26 officer in charge, said in the statement.

The Navy also is sending the San Diego-based dock landing ship USS Pearl Harbor, which is in the Persian Gulf on a routine deployment, to ferry 13 pieces of heavy equipment to Pakistan, a release stated.

Sailors from two Seabee battalions &#8212; Naval Mobile Construction Battalion-74, from Gulfport, Miss., and NMCB-3, from Port Hueneme, Calif. &#8212; loaded dump trucks, front-end loaders, backhoes, cargo trucks, a road grader, a forklift and a generator onto the ship, according to a release from Naval Support Activity Bahrain.