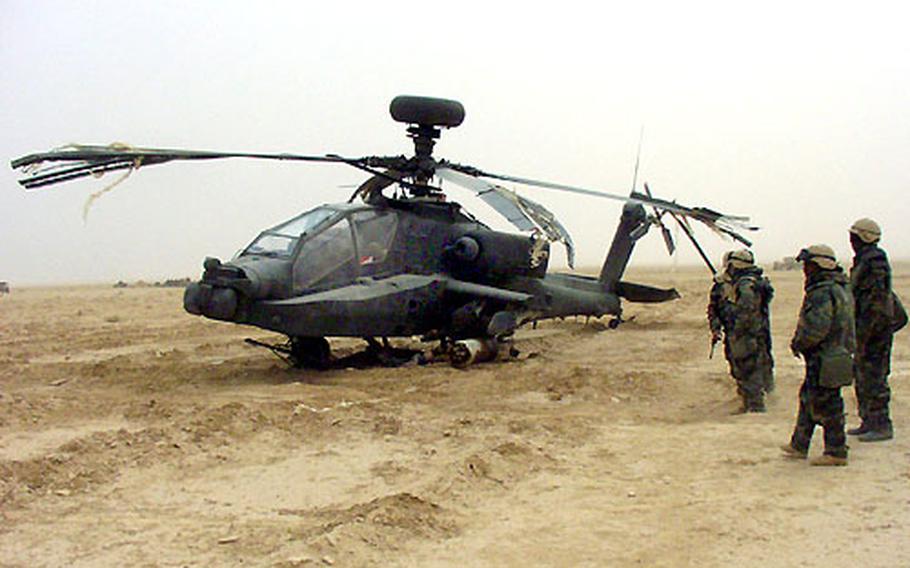 This Apache Longbow from the 6th Squadron, 6th Cavalry Regiment, was badly damaged in a hard landing before Sunday night&#39;s raid near Baghdad. (Steve Liewer / S&S)

AT ARMY AVIATION CAMP, Central Iraq &#8212; Capt. Andrew Tapscott had never seen anything like the wall of steel that met him as he flew his AH-64D Apache Longbow into the Baghdad suburbs.

Thirteen Longbows from the 6th Squadron, an Apache unit from Illesheim, Germany, flew into the area south of Baghdad on Sunday night to attack military targets associated with the Iraqi Republican Guard. Along with them were 18 Longbows from the 1st Battalion, 227th Aviation Regiment out of Fort Hood, Texas.

Their first battle wasn&#8217;t as successful as hoped: Although all except one of the aircraft returned home battered but safe, all had bullet holes. One helicopter from the 1-227 Aviation was forced down.

The squadron met ground fire minutes after leaving this camp in central Iraq after dark.

One of Barbee&#8217;s aircraft was lost even before it left camp. It took off briefly but fell back to the ground because of its weight and the dusty conditions, said Maj. John Lindsay, operations officer for Task Force 11th Aviation. The landing badly damaged the helicopter, but the pilots weren&#8217;t injured.

The 6-6 Cavalry and 1-227 Aviation took off after dark to attack two separate targets in the same area south of Baghdad. The Fort Hood aircraft arrived first and actually destroyed several military vehicles before the ground fire got too severe &#8212; bringing down one helicopter.

Williams and Young were shown on Iraqi TV on Monday, apparently uninjured.

Lindsay said it is not clear why the aircraft went down. He said it landed safely in a suburban field about 30 miles south of Baghdad.

The crew&#8217;s wingman stayed in the area, firing his gun and trying to fend off attackers from the ground. But the wingman had to leave when his aircraft caught fire. Jettisoning his remaining missiles and rockets, the pilot returned safely to base.

Military officials said Tuesday that they had destroyed the helicopter, but did not say how.

Both units flew nearly an hour through sporadic gunfire to reach their target areas, which had already been hit by Air Force bombing raids. But the bombing seemed to barely suppress the ground fire, which pilots said seemed to come from everywhere.

Redmond&#8217;s unit never made it to its targets because of the heavy fire, said Maj. Kevin Christensen, the squadron&#8217;s operations officer.

One 6-6 pilot, whose name is not being released pending family notification, was grazed in the neck when a bullet pierced his bubble canopy. Another pilot, Chief Warrant Officer 3 Mike Tomblin, at first thought the injured pilot had been killed.

But the pilot managed to apply a pressure dressing himself to the wound, which turned out to be minor, Christensen said.

Upon their return to the camp, the pilot was treated by medics and evacuated by helicopter to a medical post, where he&#8217;s recuperating and in good condition.

The helicopters returned fire with their 30 mm guns, but had to return when they expended their ammunition, Lindsay said. Even along the 40-minute trip home they flew through gunfire. Some lost hydraulic or communications systems to bullets and flew home on backup systems.

The efforts of the crews drew praise from Lt. Col. Scott Thompson, commander of the 2nd Squadron, 6th Cavalry Regiment, the 6-6 Cavalry&#8217;s sister unit in Illesheim. There is good-natured competition between the two units, but it was forgotten after this mission.

&#8220;There are a lot of heroes down there in the 1st Battalion [227th Aviation Regiment] and the 6-6 Cav who brought back a lot of busted-up aircraft,&#8221; he told his pilots during a briefing Monday afternoon.

Col. William Wolf, commander of Task Force 11th Aviation, said it is clear that the Iraqi irregulars are a tougher foe than anyone imagined.

For most of the pilots, this fight was their first combat.

For pilots flying under the banner of Task Force 11th Aviation, Sunday night&#8217;s mission offered grim evidence that the war against Iraq won&#8217;t be the cakewalk some expected.

Steve Liewer is embedded with U.S. troops in central Iraq.