Copter crews got practice in refueling during Talon Vision exercises 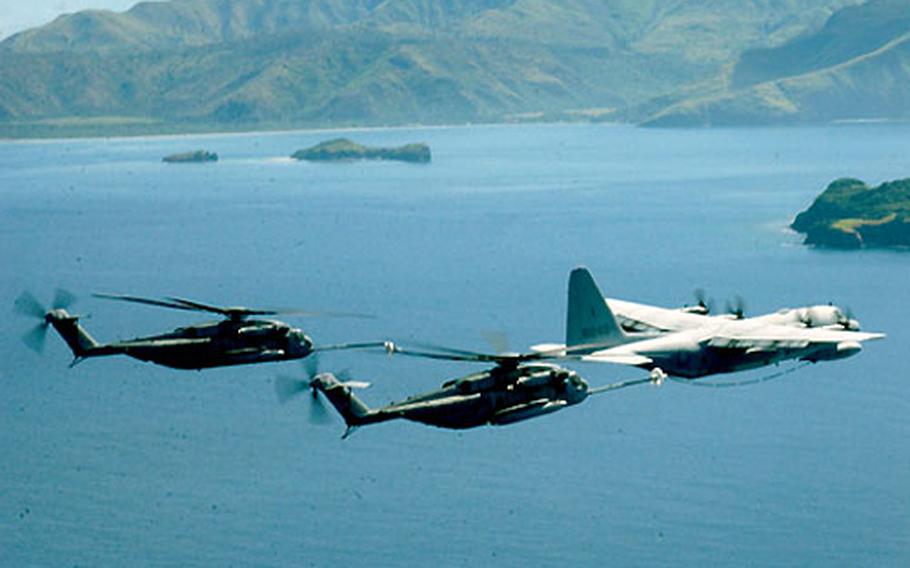 Two U.S. Marine CH-53E Super Stallion helicopters connect with a KC-130 Hercules aircraft last week during aerial refueling off the coast of the Philippines during the ongoing Talon Vision exercise with the Philippines military. (M. Stew Allen / Courtesy of the U.S. Marine Corps)

Not many guys get all that excited about being a gas jockey.

Of course, not many gas jockeys get to deliver the goods to their customers in midair and midjungle, knowing they&#8217;re helping Marines do their jobs.

That&#8217;s why Marine Capt. Matthew R. McGrath said he was pleased with the aerial refuelings his unit just completed during Talon Vision military exercises in the Philippines.

&#8220;Those CH-53s wouldn&#8217;t have been able to accomplish their mission without us providing that fuel,&#8221; he stated in a Marine Corps press release. Enabling the helicopters to remain in the air longer is key to extending the distance they can transport Marines for deep combat insertions, the Marines said.

Talon Vision is an annual training exercise with goals that include enhancing U.S.-Philippine armed forces relationships.

During an exercise Saturday, the three Super Stallions received 19,000 pounds of fuel from the KC-130s while flying 1,000 feet above the ground. While refueling, the aircraft practiced evasive maneuvering through central Luzon&#8217;s hills and valleys.

During the training, the Super Stallions transported U.S. and Philippine reconnaissance Marines to insertion points along Luzon&#8217;s coast. They then practiced amphibious landing raids in Zodiac rubber raiding boats on the beaches.

&#8220;We took off and conducted low-altitude flying to pick up the reconnaissance Marines, [met] with the KC-130s for aerial refueling, inserted the Marines into the ocean and then refueled again before landing. It was a great opportunity.&#8221;

Approximately 900 Marines from the 3rd Marine Division and 1st Marine Air Wing are taking part in the two-week exercise.