Cope North set to kick off at Misawa 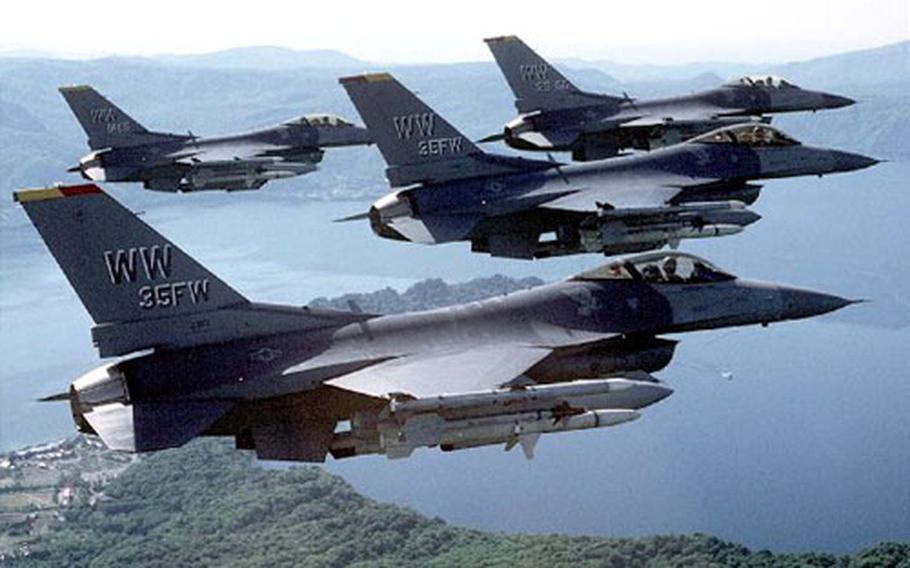 Misawa F-16CJ aircraft will take part in Cope North exercises set to begin Wednesday at Misawa Air Base, Japan. The bilateral exercise between U.S. and Japanese pilots runs through May 16. (Courtesy of U.S. Air Force)

American and Japanese aviators will convene at Misawa Air Base in northern Honshu on Wednesday for the start of exercise Cope North, set to run through May 16.

A regularly scheduled exercise held at various locations in Japan, it is designed to enhance both countries&#8217; air operations.

&#8220;This is the longest-running exercise of its type in the Far East,&#8221; said Col. Donald Welkhorst of Yokota Air Base, Japan, the exercise director. The series was first staged in 1978.

During the past quarter of a century, thousands of American and Japanese airmen have honed skills vital to maintaining readiness for Japan&#8217;s defense.

Cope North uses a building block approach to training, Welkhorst said, starting with F-16 and F-15 aircraft flying in two-by-two formations, then working up to four-by-four and culminating with a large force formation.

Both American and Japanese Airborne Warning and Control System aircraft will practice command and control of the participating aircraft.

One new aspect: Japanese pilots will perform air-to-air refueling from a U.S. tanker aircraft, marking the first time JASDF pilots have done this with their American counterparts.

Eight Japanese fighter pilots already have been qualified to perform the delicate maneuver.

&#8220;This is part of their training for the upcoming Cope Thunder in Alaska in June where Japan will have the largest international participation,&#8221; Welkhorst said.

Most Cope North flying will be done over the Sea of Japan using airspace where Misawa&#8217;s U.S. and Japanese pilots conduct routine training throughout the year.

Air Force officials said the Cope North exercise has been in the planning stages for several months and bears no connection to any real-world events.